According to one industry source, streaming services like Spotify, Pandora, and Alphabet's YouTube Red officially rule the roost in the music industry -- much to the chagrin of Apple and its shareholders.

There's a new sheriff in town in the music industry, and that's unwelcome news for Apple (AAPL 2.44%).

The rise of popular streaming services including Spotify, Pandora (P), and Alphabet's (GOOG -3.29%) (GOOGL -2.75%) YouTube have shattered the old guard in the digital music industry, which was formerly dominated by a single player -- Apple.

However, as a recent industry report demonstrates, the music industry endured a watershed moment in 2015, one entertainment and technology investors would do well to follow. 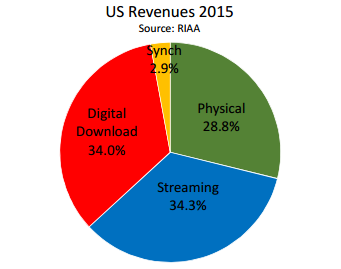 Among digital streaming services, paid subscription services like Spotify and Apple Music remain the clear favorites within the category, producing $1.2 billion in sales, slightly more than 50% of all digital streaming sales in 2015. SoundExchange Distributions, the second largest category in streaming music, generated $803 million. The category includes payments to rights holders from non-interactive digital music services like 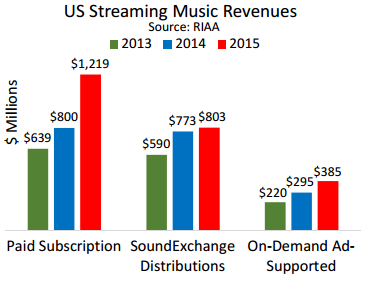 All told, no single form of music distribution (physical, digital, etc.) accounted for a majority of the industry's $4.95 billion in total sales last year. However, even despite the rise of its own music service, the shifting sands in the music industry clearly represent a headwind for Apple and its investors.

No longer the only game in town
The problem as it stands for Apple is that newer, more popular music services threaten its once-air-tight grip on its own ecosystem. As of its most recent estimates I could find, Apple Music badly trails Spotify in the battle for on-demand streaming users. Earlier this week, Spotify CEO Daniel Ek remarked on Twitter that the Finnish streaming start-up had officially broken the 30 million paid user mark. For context, recent estimates from Forbes state that Apple Music enjoys 11 million paying users, while the Jay-Z-backed service Tidal purportedly has 1 million subscribers.

More broadly, will the rise of successful competitors in digital music damage Apple's ability to sell iPhones? Not directly. However, I believe Apple's iOS software and app ecosystem constitute the glue that holds Apple's money machine together. Aside from great design and useful hardware, one of the primary reasons consumers keep buying iPhones is because defecting to Alphabet's Android would carry legitimate switching costs in the form of lost or incompatible data, lost content, missing music, and the like. The rise of alternative services like Spotify, Tidal, Alphabet's YouTube Red, or Pandora's upcoming streaming service all make it marginally easier for a consumer to defect from Apple to a competitor.

Alone, this continued trend isn't enough to meaningfully impact Apple. However, as a general proposition, Apple losing its grip on any aspect of its ecosystem is certainly unwelcome news for the company and its investors.

Suzanne Frey, an executive at Alphabet, is a member of The Motley Fool's board of directors. Andrew Tonner owns shares of Apple. The Motley Fool owns shares of and recommends Alphabet (A and C shares), Apple, Pandora Media, and Twitter. We Fools may not all hold the same opinions, but we all believe that considering a diverse range of insights makes us better investors. The Motley Fool has a disclosure policy.