Ares Capital Corporation (NASDAQ:ARCC) stands in a league of its own in the business development company (BDC) industry. With more than a decade of operating history, and a record of solid underwriting and dividend distributions to its shareholders, investors who have stuck with it have enjoyed market-beating returns.

What underlies the company's historical outperformance can be displayed in just three charts. Here's what drives Ares Capital Corporation's performance.

1. Solid underwriting
Business development companies must pay out 90% or more of their taxable income in the form of dividends to avoid corporate-level taxation. And, unlike banks, BDCs cannot provision for loan losses to preserve book value over time.

Thus, it is imperative that a BDC minimize its losses to preserve book value and earnings power over time. When it comes to measuring a company's underwriting performance, I like to observe its net realized capital gains or losses, which tally how much the company has made or lost by selling assets at a premium or discount to the purchase price. 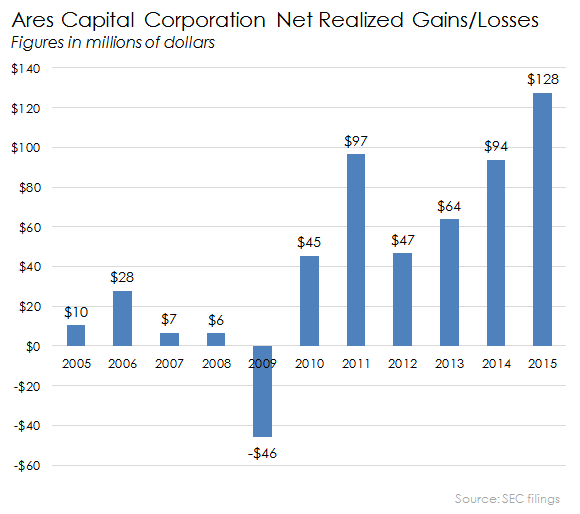 Ares Capital's record of generating realized gains is unmatched in the industry. In the last 11 years, the company has generated realized gains in excess of its losses, enabling it to preserve and grow book value on a per-share basis and pay out special dividends to its investors.

2. Consistency in earnings
Due to its excellent underwriting, Ares Capital has consistently generated positive net income on a per-share basis. Net income includes operating income (interest and dividend income from its investments minus operating expenses) and realized and unrealized gains and losses on its portfolio. Ares' earnings have been negative in only one year (2008) out of the past 11 years. 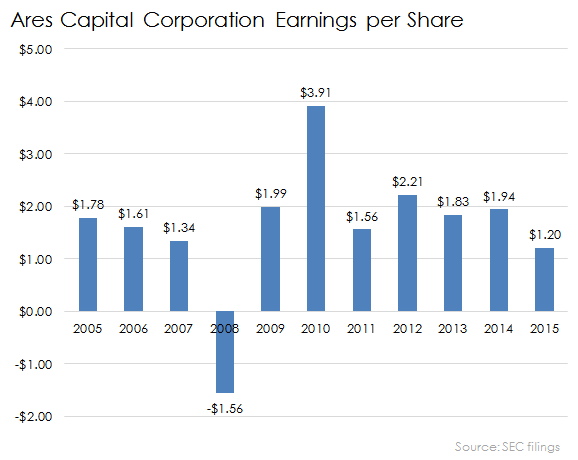 3. Book value growth
Because BDCs often pay dividend yields that venture into the double digits, they hardly need capital appreciation to be good investments. If an investor can merely sell his or her shares at the same price at which they were originally purchased, a BDC will be a spectacular investment.

Share prices are a function of the market, but over time a BDC's share price will follow its underlying book value per share. Since the company's IPO, Ares Capital's book value has held up well, even during the financial crisis, and follow-on offerings and capital appreciation in its portfolio have led to increasing book value on a per-share basis since its IPO. 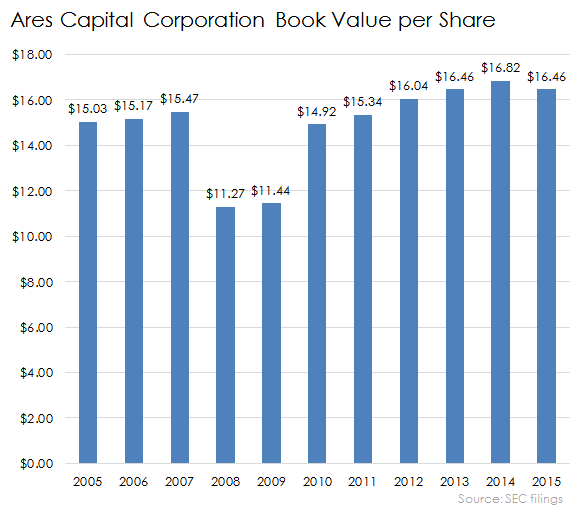 And while a general decline in business valuations and loan prices, in addition to a rout in oil prices, hurt its portfolio in 2015, the company managed to end 2015 in about the same place as it ended 2013. This is substantially better performance than many of its peers, which have seen increasing nonperforming loans and elevated losses from higher energy exposures.

Ares Capital remains a bellwether for its industry. As one of just a handful of BDCs to acquire another competitor (which occurred during the financial crisis), an impressive record that spans more than a decade, and with the power of the industry's largest balance sheets, it will likely remain a company by which all others are judged.