Will the aerospace giant be able to hit its order target despite a slowdown in demand for new jets?

In the past year, investors have become increasingly nervous about order trends at Boeing (BA -1.01%) and Airbus (EADSY 1.20%). These worries manifested themselves most dramatically in the stunning collapse of Boeing's stock price during January and February. 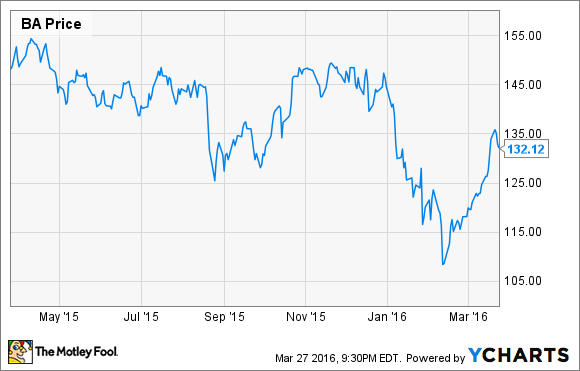 While Boeing stock has recovered somewhat, it remains down more than 10% over the past year. Clearly, many investors still doubt its ability to raise production as planned. With Q1 drawing to a close, let's take a look at Boeing's recent order activity to see if there's any substance to these concerns.

Last year, both companies built 42 narrowbodies per month. However, by the end of 2019, Airbus plans to build 60 A320-family jets per month. Boeing will be right behind, building 57 737s per month.

Narrowbody production increases are important, as these mature models are cash cows for Airbus and Boeing. Both companies are transitioning over the next few years to updated models with state-of-the-art engines. That will improve their appeal to airlines without significantly raising costs.

Sure enough, airlines have ordered thousands of A320neo and 737 MAX aircraft. Nevertheless, some aerospace analysts are worried that there isn't enough demand for Airbus and Boeing to sustain their planned production increases. According to this line of thinking, if demand starts to run dry after 2020, Boeing and Airbus would be forced to slash production, leading to potential writedowns.

Targeting a book-to-bill of 1.0
Boeing's management acknowledges that demand has moderated from the order frenzy of a few years ago. However, it is still getting plenty of interest from customers. Requests for order deferrals have remained below historical rates, which is another good sign. Together, these two factors support Boeing's planned production increases.

As of March 22, Boeing had captured net orders for 107 jets since the beginning of the year. That's considerably less than the 180-190 orders it would need to match production during Q1.

However, this is in line with the 110 net orders Boeing booked during Q1 2015. It's important to recognize that aircraft orders tend to fluctuate seasonally. The Farnborough Air Show -- the biggest of the year -- is scheduled for July. Aircraft manufacturers typically announce a slew of orders then. Another big batch of orders often comes in near the end of the year.

A bigger potential concern than the number of orders year-to-date is order quality. 65 of Boeing's 107 net orders this year were 737-700s purchased by United Continental. Boeing offered a massive discount on this deal, according to multiple sources: perhaps more than 70%.

Most of Boeing's Q1 jet sales have been deeply discounted 737-700s. Photo: The Motley Fool

Still, selling these current-generation planes on the cheap has helped give Boeing the flexibility to negotiate deferrals with other customers. In the past year, airlines like Jet Airways and Virgin Australia have converted outstanding orders to the 737 MAX. They are probably paying more to upgrade to a more advanced aircraft, which at least partially offsets the discounts on Boeing's current-generation planes.

Some things to watch but no red flags
Over the next few quarters, it will be important to see if Boeing can bag some orders for the 737 MAX, rather than heavily discounted sales of current-generation models. Boeing also needs to keep selling current-generation 777s at a steady pace to avoid a second production cut for that product line. (It has sold 10 so far in 2016, which is an adequate number.)

However, there are no big red flags for Boeing investors at this point. The order environment seems to be steady relative to 2015. In light of Boeing's massive 5,000-plus aircraft order backlog, a steady order pace is perfectly fine.