Our contributors have these stocks on their radar, but they don't think they're buying candidates yet.

Successful long-term investing can sometimes require investors to put in hours of research before they feel comfortable buying a stock. More often than not, everything can look good on paper, but for one reason or another, you find you're hesitant to pull the trigger because you're not yet fully comfortable with something about the investment. Perhaps the stock is just a little too expensive, or you have questions about the company's balance sheet. Still, for one reason or another, the stock stays on your radar.

We reached out to a handful of our contributors and asked them to highlight one stock they have on their radars but are not willing to buy yet. Read below to which see which stocks they highlighted.

Andres Cardenal: Twitter (TWTR -1.08%) turned 10 years old last week, yet investors in the short-message social network don't have much to celebrate as shares have collapsed by a staggering 65% from its highs of the last year.

The main driver behind this disappointing performance is stagnant user growth, Twitter ended the fourth quarter of 2015 with 305 million monthly users, a modest increase of only 6% year over year and flat versus the third quarter in 2015. Many users are finding the platform too complex, or they just don't understand why they should have a Twitter account. This is a serious limitation in terms of growth potential for the company, and it's also the main reason I'm staying away from Twitter for now.

On the other hand, there's a considerable chance the decline in Twitter stock will turn out to be a buying opportunity for investors. Management is doing a solid job at increasing revenue: Total sales grew 48% in U.S. dollars and 53% in constant currency last quarter. If this is the kind of growth Twitter can produce when the user base is stagnant, just imagine what the business can do if the company attracts more users to its platform.

Until the company can do better on the user front, an investment in Twitter exposes the investor to a lot of uncertainty. However, the stock offers massive upside potential from current price levels, so Twitter is clearly a name to keep on your watchlist over the middle term.

Neha Chamaria: Cummins (NYSE: CMI) stock has bounced back sharply this year -- roughly 20% as of this writing -- after losing 40% of its value in 2015. Macro headwinds may have led to last year's pullback, but it seems it's hard for investors to pass up the chance to own a global leader that manufactures engines and applications to power key industries across 190 countries.

Even in a challenging year like 2015, Cummins generated nearly as much in free cash flow as net income, maintained its operating margin above 10%, and increased its dividend by 25%. However, I'm going to stay on the sidelines and not buy Cummins just yet. Its substantial exposure to off-highway markets, many of which are facing an extremely rocky 2016, makes the stock a little dicey for me at this point.

While the automotive industry is considered its primary end market, nearly one-third of Cummins' engines revenue originates from industries like mining, construction, agriculture, oil and gas, marine, and power -- all of which are struggling right now. With Caterpillar (CAT -2.57%) issuing a dismal guidance for its first quarter and projecting a double-digit drop in full-year sales from its energy and transportation and mining-equipment businesses, a recovery's clearly nowhere in sight. The growing uncertainty in key markets like China and Brazil is a double whammy as Cummins gets nearly 40% of its total revenue from outside the U.S./Canada.

I wouldn't be surprised to see Cummins' revenue decline more than its projected 5%-9% in 2016. Moreover, with analysts forecasting a 12% drop in its earnings, there appears to be little upside left after the stock's recent rally. I'd wait for industry dynamics to improve before giving Cummins a green signal.

Tyler Crowe: One company that's been on my watchlist for some time has been General Electric (GE -0.03%). It sounds weird to be on the fence about an industrial stalwart that has been around for more than a century, but one of the reasons I've been apprehensive about buying GE is because I could never fully understand it. With its various holdings such as GE Capital and its foray with NBC, there were too many moving parts, many of which were in completely separate industries. I didn't have the slightest clue about how they operated.

Today, though, that version of GE is going away, and CEO Jeff Immelt is focusing on two big ideas: Build big things like generators, jet engines, and locomotives, and bring those big things into the new age by developing the software to connect them to the Internet. Embrac

After years of soul searching, this transformation is really starting to take hold. The company's Predix software generated $5 billion in revenue for 2015, and the company targets software sales in excess of $20 billion by 2020. Furthermore, more than 90% of its earnings will come from industrials, a far cry from a decade ago, when GE Capital was the primary revenue source.

I'm still not ready to buy, though, because I'm still uncertain about GE's valuation. With so much overhang from its GE Capital sales on the balance sheet, it's hard to get a handle on the value of the company's underlying assets and earnings. Once that balance sheet is a little clearer, I'll probably be ready to jump in.

Brian Feroldi: I've never been a fan of putting money to work in the airline industry, but I must admit that Spirit Airlines (SAVE 6.38%) has my interest piqued. Spirit Airlines is a bit of a rebel in the industry as it's known for offering the absolute lowest price on air travel. Spirit is able to do so because it doesn't offer any of the "frills" legacy airlines do, and the company charges a fee for many extras that other airlines don't.

Want help booking your flight? Have a bag to put in the overhead compartment? Are you hungry for an in-flight snack? Spirit charges for all of these little extras, which allows them to keep their costs extremely low and, consequently, charge rock-bottom prices for tickets.This model may sound unappealing to some consumers, but the company's low fares simply can't be beat, which is why many customers begrudgingly keep coming back.

Spirit's unique operating model has allowed it to gobble up market share for years, all while simultaneously producing healthy profit. Investors have come to appreciate Spirit's business, and its stock has been a home-run for its longer-term investors. 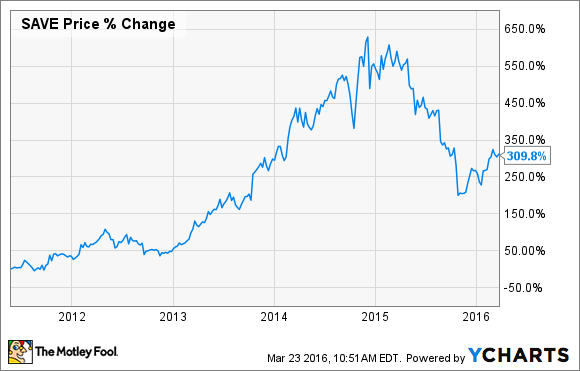 So, if the model works so well, why am I hesitant to pull the trigger right now? Two reasons: One, the company just had a big change in the top seat, as its longtime CEO Ben Baldanza was just replaced in January. The company's new CEO, Bob Fornaro, looks like a solid choice, but since Baldanza was a major driving force behind the company's success, it makes me a bit uncomfortable to invest now, with such a big change in management.

Second, American Airlines Group has been fighting back hard against Spirit recently, cutting the cost on routes where it competes with Spirit in order to retain market share. That's put a dent in the company's revenue growth. While the price war is unlikely to last forever, its not clear when American will start to price "rationally" again.

Still, Spirit's stock has been crushed over the past year, and shares are currently trading for about 11 times 2016's profit estimates. If the company can get back into high growth mode, then its likely its stock will once again soar, but until I feel more comfortable about its leadership change and price war with American, this stock will simply remain on my radar.