ExxonMobil recently raised billions of dollars of low-cost cash. Here are three companies that ExxonMobil might use the cash to buy.

ExxonMobil (XOM 1.98%) recently raised $12 billion in cash from a debt sale that it doesn't need for either dividend payments or organic growth purposes. To wit, ExxonMobil made $2.8 billion in profits in the fourth quarter and $16.2 billion for all of 2015. With ExxonMobil's $8 billion in planned capital expenditures cuts for 2016, the company's free cash flow should be enough to cover its $12.1 billion annual dividend for the year.

1. An energy company with Texas-sized reserve potential
With an enterprise value of $47 billion, EOG Resources (EOG 3.19%) is a little bit more than bite-sized even to a giant such as ExxonMobil. Given that an acquiring company would have to pay a premium to get a deal done, ExxonMobil would probably have to bid $55 billion to $65 billion to acquire EOG Resources outright, meaning ExxonMobil would either have to raise more debt and potentially lose its "AAA" credit rating or finance the deal with equity and dilute its shareholders.

Given EOG Resources' massive reserves, however, it might be worth it. According to its financial reports, the company has total resource potential of almost 7 billion barrels of oil equivalent spread across 1.3 million net acres in several promising basins, including the Eagle Ford, Bakken, and Delaware Basins. If shale technology improves, that total resource potential number will probably increase. 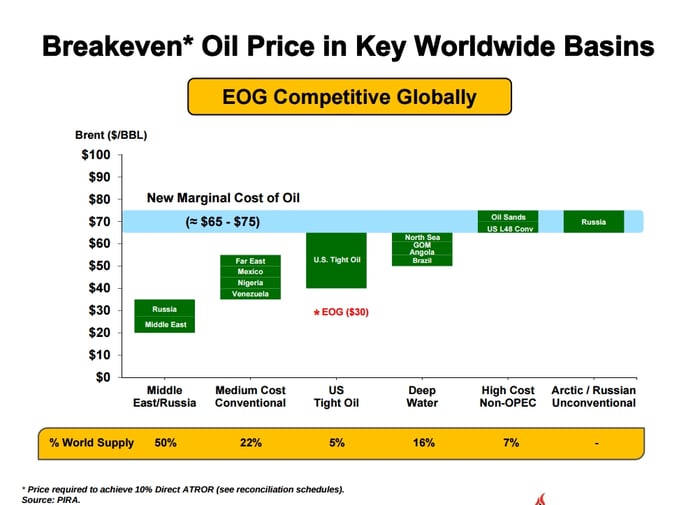 More crucially, EOG Resources has a low cost of production. Research firm PIRA estimates that EOG's breakeven oil price is $30 per barrel versus U.S. tight oil's general breakeven of $40-$65 per barrel. If ExxonMobil were to purchase EOG, it would instantly add billions of low-cost potential reserves and increase its production by around half of million BOE per day, too.

2. An independent with a major presence in the Permian
Pioneer Natural Resources (PXD -0.09%) has a major presence in the Permian basin, which has tens of billions of BOE in resource potential and is surprisingly competitive at sub-$50-per-barrel WTI prices. According to statistics from the Energy Information Administration, oil production in the Permian basin has held steady or risen even while production in other basins such as the Eagle Ford and Bakken have declined.

3. The dominant company in the Bakken
Continental Resources (CLR 1.56%) is the dominant producer in the Bakken, with over 1.045 million net acres in the basin. Although production in the Bakken is generally more expensive than production in the Eagle Ford or Permian because of wider price differentials resulting from limited pipeline capacity and tougher geography, Continental Resources is also substantially cheaper than its peers. Continental has an enterprise value of $18.5 billion versus Pioneer's enterprise value of $25 billion even though Continental has almost twice the amount of proven reserves, with 1.226 billion BOE at the end of 2015, and roughly the same amount of production with around 200,000 barrels of oil equivalent per day. If crude prices rise past $60-$70 per barrel, an acquisition of Continental Resources would make great sense, as the company would grow production at a healthy rate organically and be profitable.

How ExxonMobil benefits from the potential acquisitions
Although it isn't in danger of running out, given its total proven reserves of 24.8 billion BOE, ExxonMobil replaced just 67% of its production last year, down from the 115% average over its past 10 years. An acquisition of EOG, Pioneer, or Continental would help bridge ExxonMobil's replacement gap for several years and would give the company a low-capital-intensity, short-lead-time method to increase its own production. With its unparalleled scale and low cost of capital, ExxonMobil could realize more return from every barrel of oil and gas it produces, and a potential acquisition could pay off substantially if crude prices rebound.