Please ensure Javascript is enabled for purposes of website accessibility
Log In Help Join The Motley Fool
Free Article Join Over 1 Million Premium Members And Get More In-Depth Stock Guidance and Research
By Andrew Tonner - Mar 29, 2016 at 9:23AM

According to Gallup data, 50% of start-ups fail within their first five years. For those that survive, only a lucky handful will even graze the public consciousness. Only in the most rarified air does a firm gain hundred of millions of users, create billions in shareholder value, and become a part of our daily lexicon.

However, last week, microblogging pioneer Twitter (TWTR 1.89%) turned 10 years old, an occasion that merits both reviewing where it came from as well as looking at where it's heading.

One decade down
As has been widely noted this week by the firm and its fans, Twitter officially turned 10 years old on March 21, 2016. To commemorate, the firm posted the following tweet from its official company handle.

Starting in 🇦🇺 on 3/21 and moving across the 🌍, we thank you for 10 incredible years.

Like many Silicon Valley success stories, Twitter sprang from humble beginnings. For those less familiar, Twitter grew from a side project among Jack Dorsey, Noah Glass, Biz Stone, and Evan Williams at Willams' then-struggling start-up Odeo in 2006. In fact, Dorsey's first tweet on the service has since become something of a historical marker in the annals of technology.

just setting up my twttr

The firm's growth exploded in 2007 after a successful demo at the South By Southwest festival, leading to rounds of venture capital fundraising and a shift into a global communication service, which continued for much of the late 2000s.

As with most start-ups, the road wasn't necessarily smooth for Twitter, whose management ranks were repeatedly reshuffled during this period. Though Jack Dorsey served as Twitter's original CEO, the firm's first management reshuffle occurred in 2008, when Evan Williams became CEO and Dorsey assumed the role of Chairman In late 2010, Williams stepped down from running the firm in favor of then-COO Dick Costolo, who steered the company through its successful 2013 initial public offering. However, a lack of progress with the firm's product and business led Costolo to resign in 2015, with Dorsey again assuming the CEO role at Twitter, while also serving as full-time CEO of mobile payments start-up Square.

But is there a business?
The short answer is yes, there most certainly is a business underlying Twitter's fire hose of user-generated information. The more relevant question that has emerged for investors in recent months, though, is whether there is a high quality business behind Twitter. Unfortunately, in today's context, the answer isn't entirely clear. Here's why.

As a social networking company that funds itself through advertising, Twitter's ability to generate sales and profits is, at its root, predicated on the size of its user base. Unfortunately for Twitter, though its average revenue per user (ARPU) has more than doubled over the past two years, its user growth has dried to a trickle. 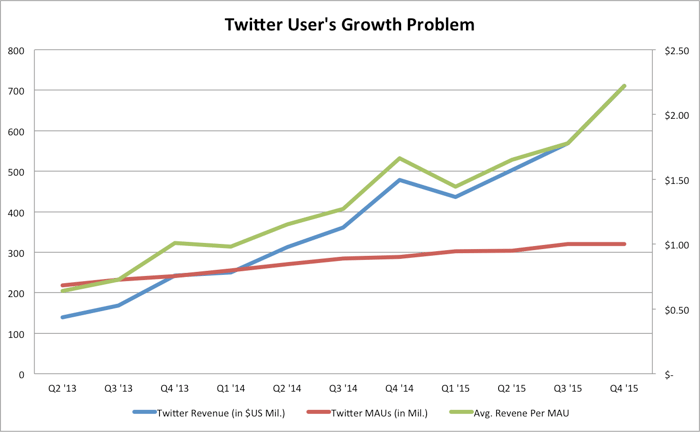 I love using this chart when talking about Twitter because it perfectly frames Twitter's core issue, which hopefully we can now agree is indeed user growth. CEO Jack Dorsey reportedly believes the company's user growth issues boil down to a combination of marketing and product issues. That's all well and good, but it makes projecting a future course for Twitter challenging from an investor's perspective. It's also where I disagree with the company's supposed choice in strategy going forward.

The path forward
In a bid to remedy one of its two problems, Twitter hired former American Express marketing exec Leslie Berland earlier this year to serve as its new Chief Marketing Officer. Though exceptionally well credentialed, and generally well received by the investment community, many analysts also quickly noted that her ability to reignite Twitter's growth will provide little tangible impact unless the product she has to market also improves. Here, Twitter's product strategy remains far from clear.

In the run-up to the tenth anniversary of its founding, Dorsey granted a number of high profile interviews. In mid-March, Dorsey flatly stated that Twitter has abandoned its experiments with the 10,000 character, long-form Tweets the company considered earlier this year. Though the company could have something better up its sleeve, the extended character limit at least promised something meaningfully different enough to possibly attract new users.

With Twitter's plateauing user growth, the company needs product improvements beyond the incremental. Until we see something that gives it broader appeal, the company's long-term prospects will stay shrouded in uncertainty.