One of the top two pharmacy benefits managers is at risk of losing a major chunk of its business, while the other is on a clear growth path. But there are other fundamentals to consider.

They're the two biggest pharmacy benefits managers in the world, and they compete against each other every day. While CVS Health (CVS 2.33%) boasts a higher market cap thanks to its retail pharmacies, Express Scripts (ESRX) edges its rival out when only PBM business is counted. But which of these two companies is the better pick to deliver big stock returns?

Two keys for getting an answer
There are a couple of key things to look at when trying to decide between any two stocks -- valuation and growth potential. Express Scripts clearly wins out on valuation based on earnings multiples (and pretty much any other valuation metric). That hasn't always been the case, though. 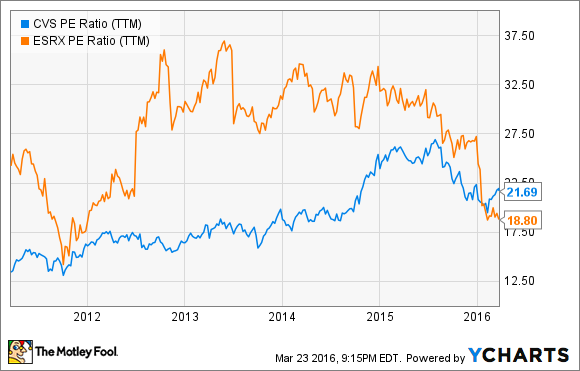 As the above chart shows, CVS Health claimed a lower earnings multiple for most of the past five years. The two companies swapped places earlier this year. What happened? In a word -- Anthem (ANTM -0.52%).

So is Express Scripts really a better value than CVS Health? That's where growth potential comes into play. The numbers on the chart reflect earnings over the past 12 months. What's more important for valuing either of these stocks is how earnings will look in the future.

Predicting future earnings is somewhat easier to do for CVS Health. The company has steadily grown earnings in recent years by 16% annually. Wall Street forecasts that that CVS Health's annual earnings growth over the next five years will be slower (around 14%), but still solid.

Express Scripts has grown earnings even faster over the last five years -- at 17% annually. The average of analysts' projections suggests the PBM will achieve nearly 13% annual earnings growth in the years ahead. The possibility that it could lose Anthem as a client, though, changes the dynamics for Express Scripts.

Anthem provides around 14% of Express Scripts' business. That translates to somewhere in the neighborhood of $350 million in earnings per year. Should Anthem cut ties with Express Scripts, the PBM will have to make up that amount elsewhere just to get back to square one.

Making the numbers
Can either company hit the growth numbers projected by analysts? CVS Health appears to be in pretty good shape to do so. The company's acquisition in late 2015 of 1,672 pharmacies in Target stores should enable CVS to scale quickly and add to its bottom line. Its Omnicare acquisition also positions the company to take advantage of growth in the long-term care market.

These retail segment opportunities are important. Even though CVS Health's PBM business generates more revenue, its retail segment is nearly twice as profitable. The PBM side of CVS seems to be in solid shape to grow earnings as well, especially with improving generic fill rates and higher specialty pharmacy volumes.

While the Anthem situation does raise questions about Express Scripts' earnings growth, the company seems to be all right for the immediate future. Its customer retention rate is at an all-time high. It raised the lower end of its earnings guidance for 2016. And the Anthem contract doesn't expire until 2019 -- unless the insurer manages to wiggle out of it earlier.

I suspect Express Scripts will do just fine at growing earnings over the long run also. There would be some ground to make up in the event Anthem leaves, but any such departure would no doubt make Express Scripts hungrier for new business. Continued strong demand among insurers for methods to control drug costs, combined with a growing elderly population, also should drive growth for PBMs in general, including Express Scripts.

Better buy
CVS Health seems to have the clearer path for earnings growth. However, Express Scripts claims a lower valuation based on P/E. Which is the better buy for long-term investors? I like CVS, but I'd give the nod to Express Scripts.

I give more weight to the valuation advantage that Express Scripts enjoys. Its market cap has fallen by more than 30 times the annual earnings decrease the company would experience if it lost the Anthem account. I'd say the share price more than reflects the prospects of an Anthem departure.

If the two companies work out their differences, expect Express Scripts' stock to soar. If they don't, I don't think the stock has a lot more downside. After the dust settles, my view is that investors would rush in to scoop up the discounted shares. And the PBM battles would continue.