Pfizer and Johnson & Johnson are both top dividend stocks. But which stock is the better buy right now?

Pfizer (PFE -1.04%) and Johnson & Johnson (JNJ -0.39%) are both considered top dividend stocks because they offer higher-than-average yields for healthcare stocks, strong free cash flows, and a lengthy history of regular increases to their payouts.

That said, J&J has been the clear favorite among investors over the past decade based on its performance. According to S&P Global Market Intelligence, for instance, J&J's stock has crushed both the broader markets and Pfizer during this period: 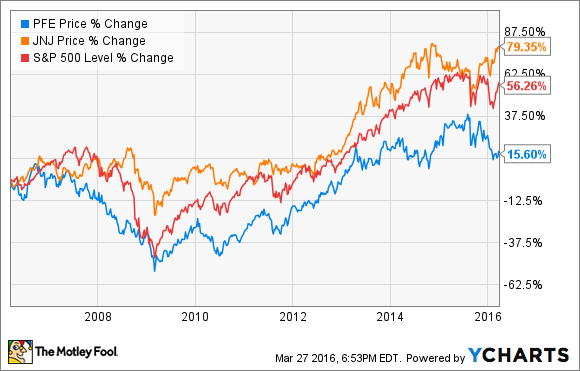 With Pfizer set to merge with Allergan (AGN) later this year and J&J starting to see a drop off in its high-growth pharma business, though, these two blue chip stocks could see their fortunes change moving forward. Armed with this insight, let's consider which stock is the better long-term buy right now.

Pfizer's long-awaited transformation is starting to take shape
Since 2013, Pfizer has seen 11 major medicines lose patent protection in either the U.S., the EU, or both. Most notably, the blockbuster anti-inflammatory drug Celebrex lost exclusivity in December 2014, causing its sales to fall by 91% from its 2013 levels last year.

To combat this wave of generic threats to its most important brands, Pfizer has slowly been going through a major transformation that essentially began when the drugmaker spun-off its animal health business as Zoetis.

After that, Pfizer subsequently reorganized itself into two distinct sub-businesses: an innovative products business and an established products business. To shore up its established products business that's been bearing the brunt of the generic threat, and to presumably hedge against generic competition to its line of biological products that are nearing the end of their period of exclusivity, Pfizer acquired generic drugmaker Hospira for approximately $16.1 billion in cash in late 2015 -- whereby paving the way for Pfizer to pursue the game-changing merger with Allergan this year.

Going forward, Pfizer is expected to combine its innovative products business with Allergan's branded pharma business to form a new unit dubbed "Global Specialty and Consumer Brands" that should be the main growth driver for the merged entity in the years to come.

Having said that, the drugmaker's plans for its vast legacy products business remains somewhat of a mystery at this point. After all, Allergan is currently in the process of selling its generic drug unit to Teva Pharmaceutical Industries (TEVA 1.07%), which should take place before the start of summer, according to the latest reports from Teva. And Pfizer apparently didn't want to take on Allergan's generic business, even naming this particular divestiture as one of the conditions of the forthcoming merger in its latest 10-K.

All signs therefore point to Pfizer either spinning off its legacy products business in a manner similar to its creation of Zoetis, or attempt to sell this product portfolio to a generic drugmaker for perhaps around $20 billion to $25 billion (based on its current revenue projections for 2016 and beyond), in order to unlock the value of its innovative products segment.

The problem is that the size of Pfizer's legacy products business limits the number of potential suitors. Worse still, Teva, which would naturally be a top candidate to take on this sizable portfolio, no longer looks like a viable candidate after offering $40.5 billion to acquire Allergan's generic unit.

The long and short of it is that Pfizer will probably have to acquire yet another company to transform its legacy products business into a viable stand-alone business -- and that could take a while in light of the massive integration that's going to take place once Allergan and Pfizer consummate this merger.

There's more than meets the eye with Johnson & Johnson
While J&J's name might instantly bring forth images of Band-Aids and baby powder, the truth is that this company is a broadly diversified healthcare company operating three distinct segments: consumer, pharmaceutical, and medical devices.

In recent years, though, J&J's pharma business has been its main growth engine due the segment's industry-leading level of innovation. Unfortunately, this unit has recently run into a couple of major speed bumps stemming from the the negative impacts of a strong dollar, the introduction of superior medicines from competitors, and generic threats to best-selling medicines like Remicade. The net result is that J&J's global sales fell by 5.7% to $70.1 billion in 2015, compared to increases of 4.2% in 2014 and 6.1% in 2013.

Unlike Pfizer, however, J&J has turned primarily toward its internal and external R&D platforms to restart its growth engine. In pharma, J&J is forecasting that it could bring as many as 10 new blockbuster products to market by 2019.

On the medical device side of things, J&J is presently restructuring this struggling unit to save money and shifting its focus to high-growth areas like robotic surgery. Last year, for example, J&J announced a partnership with Alphabet to develop robotic-assisted surgical platforms with the stated goal of bringing a product to market in record time. Since then, this partnership has evolved into the independent surgical solutions company called Verb Surgical.

The key issue to understand is that the minimally invasive robotic surgery market is expected to be among the fastest-growing businesses in all of healthcare over the coming decade. So, if this partnership bears fruit, it could be an extremely important value driver for the company moving forward.

Which stock is the better buy?
The truth is that both Pfizer and J&J are facing a highly uncertain future right now. Pfizer desperately needs this merger to Allergan to go through, and after that, it needs to do something with its legacy products business to maximize shareholder value over the long term. Unfortunately, a lot can go wrong between now and the time this planned merger is expected to close.

J&J, for its part, is highly dependent on continuing its recent tradition of bringing innovative new products to market at record pace in order to push past these current headwinds. While J&J is certainly capable of doing just that, there's no guarantees when it comes to risky clinical trials. Furthermore, the robotic surgery market is attracting a lot of potential competitors lately, meaning that J&J's partnership needs to hit pay dirt as soon as possible before the market is saturated.

All things considered, I think J&J is perhaps the better long-term buy, especially for income-seeking investors looking for a safe bet. While I am shareholder of both Allergan and Pfizer -- and I do think this merger offers a higher upside potential in the short-term than J&J at the moment -- the fact remains that J&J has provided its shareholders with market-beating returns for over a decade at this point, and that's not by accident.

After all, J&J's management has gotten ahead of most of its patent problems by simply having a knack for identifying novel new product candidates -- whereas Pfizer has been forced to rely on massive share buybacks and huge mergers to create shareholder value over the last 10 years.

In short, I think J&J deserves the benefit of the doubt as it works through some of these headwinds. Pfizer's plan to break out of its current funk, on the other hand, still has too many moving parts to make it a more compelling buy than the time-tested Rock of Gibraltar that is J&J.