Please ensure Javascript is enabled for purposes of website accessibility
Log In Help Join The Motley Fool
Free Article Join Over 1 Million Premium Members And Get More In-Depth Stock Guidance and Research
By Daniel B. Kline - Mar 29, 2016 at 1:00PM

Both are heavily exposed to the rapidly changing media business landscape, but one company faces a much rockier path than the other.

Time Warner (TWX) operates in a number of businesses -- television and film, specifically -- that are in the midst of potentially radical changes. A content-driven company, it owns a number of cable channels, including HBO, which also operates as a streaming service, as well as the Warner Bros. group of film studios.

Verizon (VZ -0.37%), on the other hand, operates on the service and distribution sides of the media business. The company serves the most U.S. wireless customers, as well as a sizable number of broadband, and pay-television users.

Both companies have their strengths, but arguments can be made that each faces potentially crippling challenges going forward. Still, when you look at their future prospects, one company stands in a clearly better position than the other. 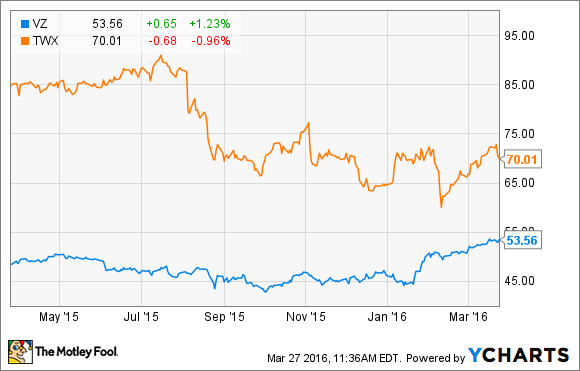 The case for Time Warner
The biggest negative facing Time Warner is that its most consistent revenue comes from its cable networks, and the market for pay-television could erode. A little more than half of the money the company took in during 2015 came from its Turner division (which houses most of its cable properties) and its Home Box Office segment. The rest came from Warner Bros., which includes some video game revenue, a music division, television production, and the highly volatile film business.

It's the cable properties that carry the most shareholder risk, because it's possible that over the next few years, the entire industry could disappear as people ditch pay-television for streaming services. Overall cord-cutting has been a slow drain on pay-TV with about 100,000 people leaving in 2013, 150,000 in 2014, and 385,000 in 2015, according to numbers from Leichtman Research Group (LRG).

Time Warner does have something of a hedge against the trend picking up steam, as it sells HBO on a stand-alone, no-cable-subscription-required basis, but if cable subscriptions decline in a, the company would take a big hit. Still, the current data suggests cord-cutting may not yet be quite the industry scourge many had predicted. There are still 94.2 million pay-TV subscriptions in the U.S., after all. While the day may eventually arrive when the number of cancelers starts making a serious dent in that figure, Time Warner will have likely have many years to adapt a new strategy for TBS, TNT, CNN, and the rest of its cable portfolio.

The case for Verizon
Verizon faces the same issues in the pay-TV industry, only from the provider side. In that case, however, any losses it suffers due to cord-cutting could be at least partially offset by gains on the broadband side. Since cord-cutters need high-speed Internet connections to take advantage of streaming media, broadband subscriptions have been steadily growing.

Where Verizon could take a big hit is in its wireless business; lower-cost competitors Sprint and T-Mobile have been gaining ground on the leader with their improved networks. If they continue to catch up on quality, it could leave Verizon as a slightly better, but much-more-expensive choice, which could either lead to consumers fleeing, or Verizon cutting its prices (and margins).

Verizon has built its entire business model around having a superior network. It's very possible that its rivals will, if not match it on quality, at least get to a place where the  differences are small. That would negate a huge advantage for the leading carrier -- and essentially take away its identity, putting Verizon's entire customer base at risk of being poached. Cord-cutting could hurt both companies, but losing its wireless network advantage due to the rest of the industry getting better could be devastating for Verizon.

Which is a better buy?
Both companies face risks, but Time Warner certainly sits in the stronger position. Since its has such strong cable brands, it's likely that its core stations would find audiences even in a changed pay-TV world. It also has HBO, which has enormous growth potential as a stand-alone service.

Verizon faces the possibility of ending up with a product that's not appreciably better than its rivals', but that costs more. That could leave it a corporate relic as customers flee to cheaper, almost-as-good service. It's certainly possible for Verizon to evade that pending crisis -- but efforts like the company's lame go90 video service seem out of touch at best.

Time Warner has some choppy waters to sail through, but Verizon is facing a potential megastorm. TWX has less risk and more upside, making it the better buy going forward.