Fuel cells are a high-potential business, but the potential for investor profit is less clear.

In late 2013 and early 2014, there were few stocks that captured the market's attention like Plug Power (PLUG -2.06%). The company became a hot name in hydrogen fuel cells, and a deal with Walmart opened up investors' imaginations about how big this business could get.

But over the long term, the stock hasn't really gone anywhere. Since the start of 2012, it's actually down slightly. So, is this a safe investment or just a volatile bet on the market for hydrogen fuel cells? 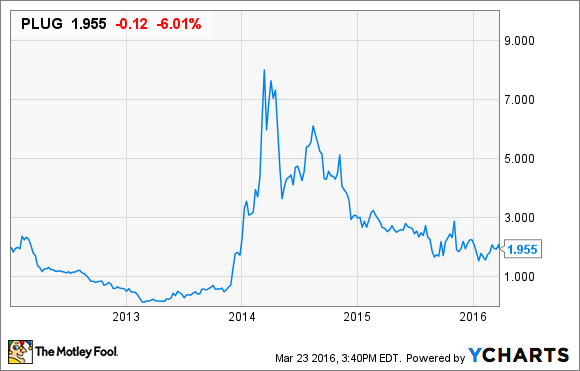 Huge potential in fuel cells
At the end of 2015, there were 8,700 Plug Power GenDrive  units in operation. These units are a system that replaces a normal battery for a hydrogen fuel cell. So far, they have been most successful in warehouse material handling equipment such as forklifts. The benefit is that fuel cells are faster to "charge" than a battery and saves a warehouse having a battery charging room and the time associated with changing batteries. The additional benefit for Plug Power is that a system is usually accompanied with a hydrogen supply contract, which brings in ongoing revenue.

But the bigger goal is to move beyond materials handling to electric-powered vehicles. The company has identified range extenders for EVs as a growth market, as well as industrial vehicles. In 2016, the company is hoping to break into these markets, although the competition may be more fierce than you'd expect.

Fuel cells have been researched for decades by companies like Toyota and Hyundai, not to mention Plug Power's biggest competitor, Ballard Power (BLDP -0.15%). Ballard is already  in a lot of the industrial markets Plug Power would like to be in, not to mention materials handling. And neither company has enjoyed much financial success.

Show me the money
There's no question that Plug Power has been able to grow rapidly in the last few years. Revenue reached $103.3 million in 2015, but what investors should be concerned about is the $44.1 million adjusted net loss and the $47.2 million in cash used for operating activities during the year. Ballard's net loss was lower, but that's partly due to its slow growth. 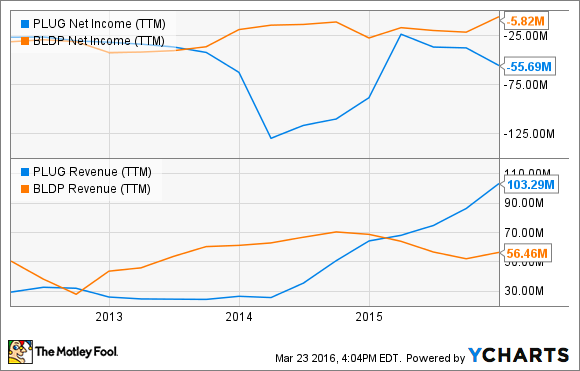 In 2016, management is hoping to grow revenue to over $150 million, but only expects gross margins of about 10%, and is hoping to burn less than $20 million in cash. After all of the growth the company has had, it's still losing money and burning cash.

Is this a safe stock?
Until Plug Power can prove its ability to make money, it's still a speculative stock, and definitely not safe for investors. With that said, it's worth watching because the hydrogen fuel cell market has a lot of potential for growth, and Plug Power may play a role in bringing that technology to a growing number of customers in materials handling and beyond. I'm just not confident it will be a profitable investment now, because a huge financial turnaround that needs to take place in the company, and even management doesn't foresee that happening until at least 2017.