What: Crude oil resumed its slide today, falling further after topping out at more than $40 a barrel a few days ago. As of 10:45 a.m. ET, crude was down 3.3% to just above $38 per barrel. This pulled oil stocks down with it, with Seadrill (SDRL), California Resources (CRC), Denbury Resources (DNR), Erin Energy (NYSEMKT: ERN), and EP Energy (EPE) all slumping close to double digits in early morning trading: 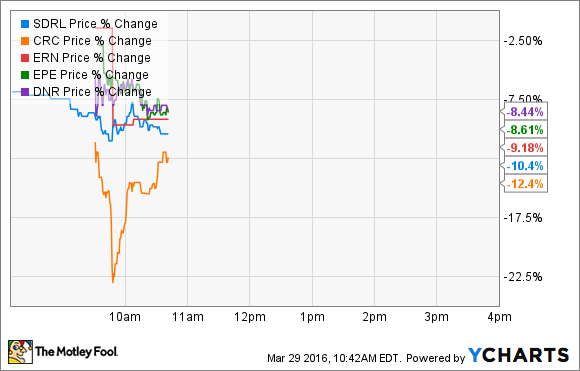 So what: There wasn't any partially bearish news to drive oil prices lower today. Instead, crude just seems to be taking a breather after surging a remarkable 45% off its bottom over the past month. That, and the market is growing weary that crude oil's rise has mainly been fueled by talk of an output freeze by OPEC and Russia, without an actual agreement resulting in tangible action.

This lack of action is weighing on oil stocks, which need higher oil prices to drive improved cash flow and business conditions. Seadrill, for example, recently had to significantly lower the dayrate on one of its rigs just to keep it working, agreeing to an 18-month extension in exchange for reducing its dayrate from $467,000 to just $229,000. The market continues to worry that Seadrill will be forced to accept additional rate reductions given the belief that the offshore drilling market is years away from recovering.

Meanwhile, persistently weak oil prices have forced drillers like California Resources, Denbury Resources, Erin Energy, and EP Energy to explore every option in order to keep their finances above water during the downturn. California Resources, for example, agreed to pay $21 million in increased interest costs annually in order to lop off $563 million in net debt via a second lien exchange late last year. Denbury Resources tried a similar exchange to no avail after bondholders balked at its terms. EP Energy, on the other hand, recently sold $420 million in assets in order to bolster its balance sheet while Erin Energy has been delaying some exploration activities and implemented a cost reduction plan to address the impact of low oil prices on its business. All of these actions were meant to help these companies better manage the impact of lower oil prices.

Now what: Oil is heading in the wrong direction right now. That's not what these companies want to see because they need oil to be at a much higher level to support their large debt loads as well as to provide cash flow needed to invest in their business. Given the uncertainty as to when that will happen, it's weighing these companies down.