Management is eliminating 90 jobs in a bid to put the company on a path to profit.

After losing $231 million last year in spite of a 102% increase in sales of its only commercial drug, Iclusig, Ariad Pharmaceuticals (NASDAQ: ARIA) new CEO Paris Panayiotopoulos is taking a hatchet to its expenses.

Yesterday, Panayiotopoulos announced that 25% of employees at its Cambridge, Massachusetts and European headquarters will be let go. Can this cost-cutting move put Ariad Pharmaceuticals in the black? Let's take a closer look.

Iclusig won FDA approval in December 2012, three months sooner than expected, however, the drug was temporarily removed from the market in 2013 following reports of life-threatening blood clots forming in patients.

After the FDA reworked Iclusig's label to highlight the risk of blood clots, Iclusig returned to the market in 2014, and sales have headed higher ever since.

In 2015, the company reports that Iclusig's sales more than doubled to $112.5 million. Yet, that surge failed to offset the spike in the company's spending on SG&A and R&D.

Ariad Pharmaceuticals spent $163 million last year on selling, general, and administrative costs, up from $140 million in 2014, and it spent $171 million on research and development, up from $121 million in the year prior. 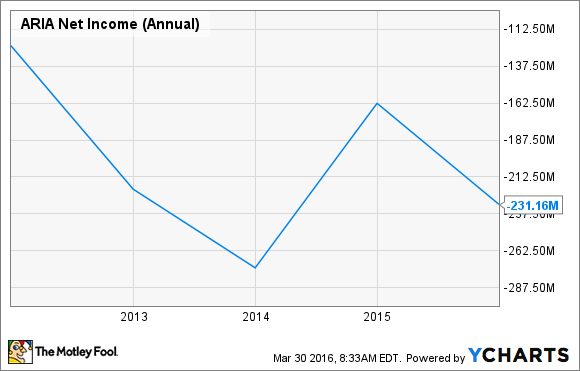 Getting its financial house in order
Reports of a potential sale of the company last year fizzled out by year end and the board installed Panayiotopoulos in the top spot at the company in January.

Panayiotopoulos first order of business is to right-size the company's expenses and restore confidence in shareholders.

During Ariad Pharmaceuticals first quarter conference call, Panayiotopoulos said that there would be no sacred cows in his hunt for cost savings and yesterday, the CEO outlined his first cost-savings measures.

Specifically, Panayiotopoulos is eliminating 25% of its workers at its U.S. and European headquarters. Overall, 90 positions are being eliminated with all of the planned cuts coming from parts of the business that aren't responsible for direct sales to customers.

The workforce reduction is the first part of Panayiotopoulos five-part strategic review of Ariad Pharmaceuticals' business. Therefore, more news could be coming related to the company's efforts to boost sales, its geographical presence, its R&D program, and other business development activities.

Panayiotopoulos didn't spell out how much he expected these job cuts will save the company in the coming year, but a straight line 25% cut to its SG&A expenses would bring those costs to a bit below where they were in 2014. However, since cuts don't appear to include highly compensated members of its sales team, it's probably safe to guess-timate that SG&A expenses will be a bit higher than that back-of-napkin calculation.

Steps in the right direction
Cutting costs to the tune of tens of millions of dollars is a good start toward profitability, but these cuts alone won't be enough to put the company in the black. Panayiotopoulos targets Iclusig sales of only $190 million this year and since R&D spending isn't likely to drop until after the company puts the wraps on the development of its second drug, brigatinib, more losses are likely.

Overall, its good to see that management is finally taking the initiative to rein in spending, but absent more cuts or until we get more insight into brigatinib's commercial potential, there are probably better investment ideas out there.