P&G's stock is up -- for a change -- but investors who sell now to take those profits might regret that decision.

After its stock significantly underperformed the broader market in 2015, Procter & Gamble (PG -0.76%) shareholders' fortunes have shifted. The consumer goods giant is beating the Dow so far in 2016, and is also ahead of the blue chip index over the last 52 weeks. 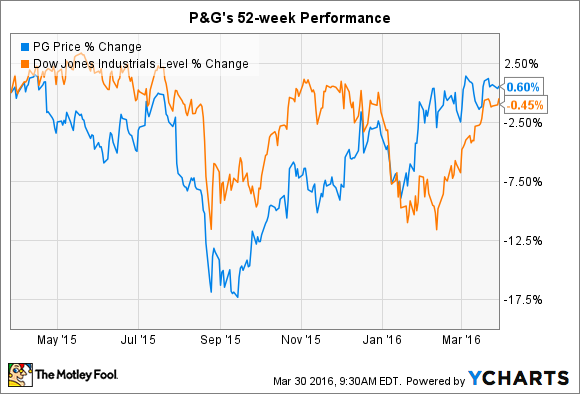 So is it time to cash out of this slow-moving consumer goods giant, or are recent gains just the start of a long-term rebound? Below, I'll highlight one good reason to sell and two good reasons to hold on to your P&G shares.

Sell on poor market share performance
There isn't much to cheer about P&G's latest business results or its short-term outlook. After all, revenue is down 10% over the past six months and net income in the past fiscal year was down 40%.

Sure, organic sales, which strip out currency changes and brand divestments, rose 2% last quarter to mark the first sequential improvement on that metric in almost two years. But those gains came only from higher prices, with no help from improving sales volumes. 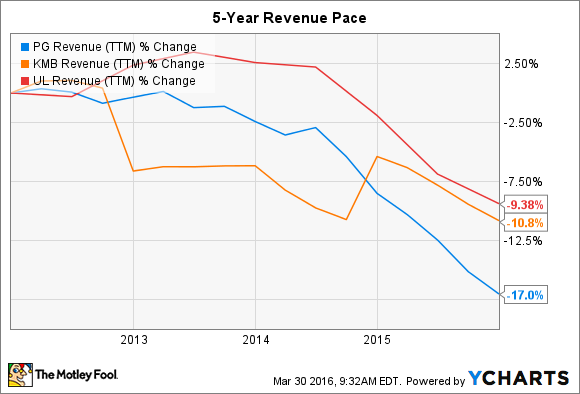 While rivals Kimberly-Clark (KMB -0.65%) and Unilever (UL -0.54%) are logging 5% volume gains, P&G's dropped by 2% last quarter. Volume fell in four of its five main product categories, and its best-performing division, fabric care, was flat. Meanwhile, management isn't projecting a quick return to organic growth: Its fiscal 2016 forecast calls for zero growth at the low end of the guidance range, compared to a 4% growth outlook for both Kimberly-Clark and Unilever.

Unlike those competitors, P&G gets a significant chunk of its business from geographies that are struggling economically and/or politically, including Venezuela, Russia, Ukraine, and Brazil. That's why if you're an investor looking for market-leading growth, you might consider selling P&G in favor of one of its faster-expanding rivals.

Hold for profitability and cash returns
On the other hand, P&G's portfolio transformation strategy, which involves removing 100 brands from the operations so that management can focus on just 65 powerhouse franchises like Downy, Always, and Pampers, is already making the company more profitable. Earnings rose 7% over the last six months despite the 10% slump in revenue. CEO David Taylor and his team believe that the smaller, more agile company will be able to improve organic sales at a faster pace (estimated to be at least 1% accelerated growth), with a significantly higher profit margin. The best reason to hold on to P&G's stock is for the mountain of cash that's likely headed your way as a shareholder. Thanks to its rock-solid cash flow (cash flow productivity hit 117% of earnings last quarter), the company has been able to boost stock buybacks and dividends even during the past few years of weak sales and earnings growth.

That's just a small taste of what's to come, though. Funded in part by a few billion-dollar brand divestments, P&G plans to deliver $70 billion to shareholders over the next four years and raise its annual cash return pace to $18 billion from the prior $12 billion pace. Investors who value cash might want to hold onto their shares, as the company plans to distribute the equivalent of one-third of its market capitalization out to shareholders through fiscal 2019.

Ultimately, it seems more likely that P&G's business will get better rather than worse over the next decade. And to add flexibility to that thesis, investors can at least count on a hefty dividend yield to cushion any losses. Therefore, in my view, selling now simply to book minor capital gains would be a mistake.