As the two fitness tracker companies slug it out in courtrooms and in the marketplace, the leader in wearables has taken a beating on Wall Street. But is Fitbit stock low enough to make it a fit buy for your portfolio again?

In the searingly hot wearables market, competition is slowly reaching a fever pitch.

Like many high-growth markets, the space has attracted an avalanche of entrants in recent years. However, as the space gradually matures, competitive pressures will likely cull the herd considerably.

Two of the most recognizable brands in the space have been FitBit (FIT) and privately held Jawbone, which have enjoyed different trajectories in recent years. However, over roughly the last year, the two longtime competitors' paths have increasingly crossed in a different arena: the courtroom.

Suit and countersuit
For almost a year, Jawbone and FitBit have been involved in an increasingly ugly series of lawsuits.

Last May, in the run-up to FitBit's IPO,  Jawbone sued the company, accusing it of stealing trade secrets when it hired a number of employees away from Jawbone. Only two weeks later,

Jawbone sued FitBit again, this time alleging it had violated certain patents granted to Jawbone. Then in the fall, FitBit responded in kind, filing three separate patent infringement cases and one complaint with the International Trade Commission against Jawbone. And the list of legal grenades being lobbed between the two only got longer from there. Suffice it to say, the web of suits and countersuits grew dizzyingly complex.

Fast-forward to today: FitBit has successfully defeated four of Jawbone's six total claims against it before the International Trade Commission, but the bad blood has by no means abated. According to a recent Bloomberg report, the two firms were scheduled to begin mandatory arbitration proceedings on March 25, which prompted a fresh wave of disparaging commentary from both camps. To be sure, the protracted legal brawl has reached near-comedic proportions, which certainly doesn't help restore confidence in one of the most badly beaten stocks in consumer electronics this year.

Down but not out?
To say things have gone south for FitBit thus far in 2016 would be an understatement in the extreme, as the chart below demonstrates. 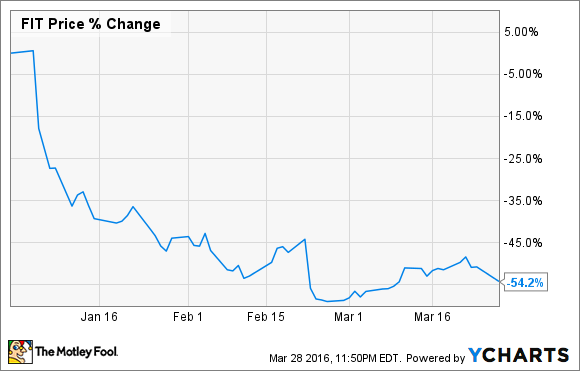 However, given that the firm now trades at 18 times trailing earnings, well below the S&P 500's P/E ratio, the investment thesis for FitBit has also become increasingly interesting.

The biggest positive FitBit has going for it is its continued leadership position in the fitness tracker space. Though other capable companies, such as Chinese smartphone powerhouse Xiaomi, increasingly covet this market, mounting evidence suggests the fitness tracker market should remain at least moderately insulated from the threat posed by leading smartwatches like the Apple Watch. For the full-year 2015, FitBit remained the most popular brand of fitness trackers and smartwatches, shipping an estimated 21 million devices versus 12 million fitness trackers for Xiaomi and 11.6 million smartwatches for the Apple, according to researcher IDC.

This makes intuitive sense on one level, since at least some consumers will never want full-feature smartwatches. The company also enjoys plenty of brand awareness as the largest player in the space. What's more, FitBit's software ecosystem continues to improve, and its corporate wellness program and premium software initiatives should help increase the firm's stickiness with its customer base. 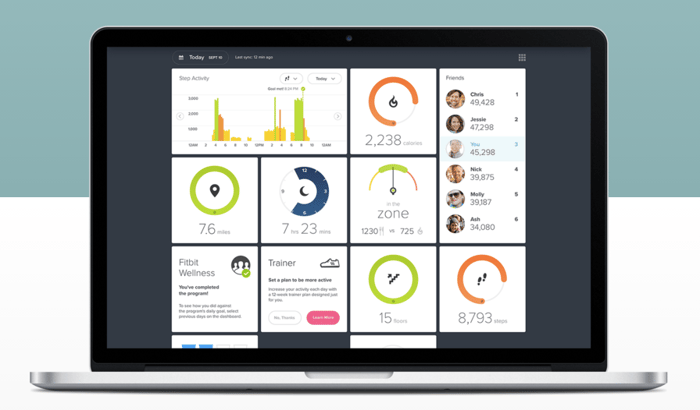 However, FitBit's growth is also slowing -- a point that factored heavily into the stock's sharp descent. The firm's shares dropped precipitously after the company's recent fourth-quarter earnings report offered lower guidance than analysts expected.  What's more, the company is coming off the release of the most derided product in its relatively brief history: the FitBit Blaze smartwatch.  It also faces the nearly perpetual risk that another tech company could migrate downstream from the smartwatch space with a product that could seriously impact the firm. An Apple smartband for example, as unlikely as it might be, is a risk all FitBit investors will have to permanently endure.

So while FitBit's recent sell-off and potentially dissipating legal woes suggest a rosier future for investors in this newly cheap stock, there are certainly plenty of reasons they might shy away from one of the most battered stocks in all of tech.