Here are three banks our contributors think you should buy before they get more expensive.

The market has rebounded somewhat over the past month or so, but many stocks still trade for attractive prices -- especially in the banking sector. In fact, many banks are trading at valuation levels that haven't been seen in several years. With that in mind, here are three bank stocks our analysts feel are great buys right here and now.

Brian Feroldi: When it comes to putting money to work in the banking sector I think that investors could do worse than simply copying the moves of master investor Warren Buffett. Since the "Oracle of Omaha" recently added a few million more shares to his already massive position in banking giant Wells Fargo (WFC -0.60%), that could be a sign that it's a good time to give the bank's stock a closer look.

It's easy to understand why Buffett has turned Wells Fargo into Berkshire Hathaway's largest position. Wells counts roughly 8,700 stores in its vast empire that help it to service more than 70 million customers nationwide. The company's huge size and scale allow it to offer a wide range of financial products to consumers and businesses alike, and its massive distribution network helps to ensure that the company is able to attract and retain customers.

But what has made Wells Fargo such a great investment over the long term is that it controls its costs so well as its efficiency ratio of 57.4% is one of the lowest in the industry. By keeping its costs so low the company is able to price its products competitively in the marketplace to win its fair share of new business and still produce healthy profits.

The company's stock is off to a rough start in 2016 as it has declined by more than 10% year to date and it's now trading around 1.45 times its book value. With the bank's shares now yielding about 3% I think it's a good time for investors to copy Warren Buffett and add a few shares of Wells Fargo to their portfolios.

Jason Hall: I've gone back and forth on Bank of America Corp (BAC -4.26%) over the past few years, even owning shares for a time only to sell them because of concerns about the company's financial liabilities and litigation risk coming out of the financial crisis. But I recently bought back in, and you should think hard about doing the same thing.

The thing is, BofA's stock has remained very, very cheap, both on a historical basis, and against its banking peers, in recent years: 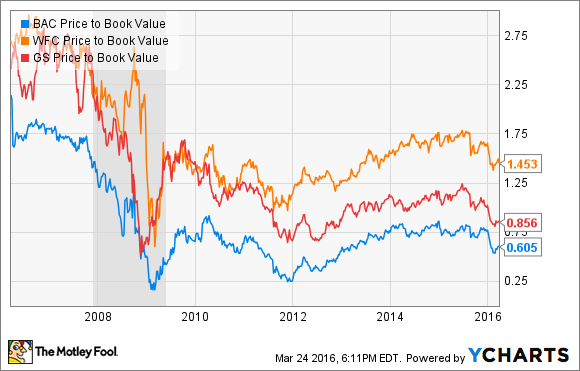 I've been reticent to reinvest in the company until now, but Bank of America has finally moved beyond the risk and uncertainty that has been hanging over the company, settling claims tied to Countrywide Mortgage with numerous state and federal agencies last year. At the same time, the bank has reduced its physical footprint, continues to take steps to improve its cost structure, and is set to benefit from rising interest rates.

The risks have come down, profitability is set to grow sharply, but the market is looking the other way. The recent downturn in banking stocks made an already-cheap Bank of America into a steal. As of this writing, Bank of America's stock is down more than 20% from late-2015 prices, and trades at a significant discount to its banking peers in valuation metrics including price to book value, and price to earnings.

Yes, BofA shares may remain cheaper than its peers for years to come, but there's still huge upside if that remains the case. Now's a great time to buy Bank of America.

Matt Frankel: Like Jason, I too have loaded up on Bank of America in my portfolio, and another bank that strikes me as particularly attractive right now is Goldman Sachs (GS -2.32%).

Like the rest of the banking sector, Goldman is facing headwinds that have caused its price to drop in recent months. The IPO market is a little weak, persistently low oil and gas prices could cause a wave of loan defaults, and overall global economic uncertainty has bank investors nervous.

However, I think Goldman's current share price compensates investors for these risks and more. In fact, Goldman is trading for a 5% discount to the value of its tangible assets -- a valuation level last seen in 2012 when the financial crisis was fresh in investors' minds.

In addition, Goldman Sachs' has diverse business lines that can compensate for each other during tough times. For example, the low oil prices could cause loan defaults, but they could also lead to a boost in M&A activity as well.

Finally, I love that Goldman prioritizes buybacks over dividends, which could add tremendous value for shareholders while the price is depressed. In a nutshell, Goldman Sachs is made up of the smartest guys on Wall Street, who will find a way to make money no matter what the economy is doing.