Wells Fargo’s straightforward business model should pay off again when it reports first-quarter earnings on April 14.

While it's impossible to predict the future, it seems fair to say that Wells Fargo (WFC 0.61%) will turn in the best earnings for the first three months of the year compared to its big bank counterparts JPMorgan Chase (JPM 0.49%) and Bank of America (BAC 0.23%).

This will come as no surprise to investors who follow bank stocks. The main reason for this is simply that Wells Fargo has long been one of the most profitable big banks in America. It turned in a 1.32% return on average assets last year. JPMorgan Chase and Bank of America, meanwhile, generated ROAs of 0.99% and 0.74%, respectively. 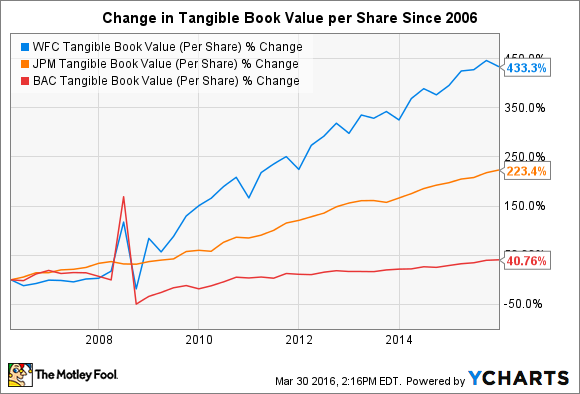 Wells Fargo's ability to distance itself from the pack could even accelerate in the first quarter of this year. This is because the California-based bank relies less on investment banking and trading revenue than JPMorgan Chase and Bank of America do. Both of these business lines are widely expected to lag the prior year in the first three months of 2016.

To get a sense for the impact this will have, JPMorgan Chase generated $1.8 billion in investment banking fees in the first quarter of last year. The same figure at Bank of America came in at $1.3 billion. By contrast, Wells Fargo does so little business in this area that its income statement doesn't even break out the total.

In sum, the stars are aligning to ensure that Wells Fargo will once again report the best quarterly earnings among the nation's three biggest banks.

Here Is Why Wells Fargo Is Shrinking Its Mortgage Business
401%