Shares are falling today, but let's keep it in perspective.

What: Shares of Genocea Biosciences (GNCA -9.25%), a clinical-stage biopharmaceutical company focused on vaccines and immunotherapies, have had a crazy couple of days. The stock nearly doubled in value on Thursday after the company released data from a phase 2, but they are currently giving back a little bit of the gain today. Shares fell as much as 13% in early morning trading, though they have largely recovered since.

Still, with shares up more than 75% over the last few days, it's been a great week to be an investor in this company. If you zoom out a little bit wider, you will see that Genocea is up more than 39% year to date, which is a terrific performance considering that the SPDR S&P Biotech ETF (XBI 2.25%), which holds a wide variety of biotech stocks, is down more than 24% over that same time span. 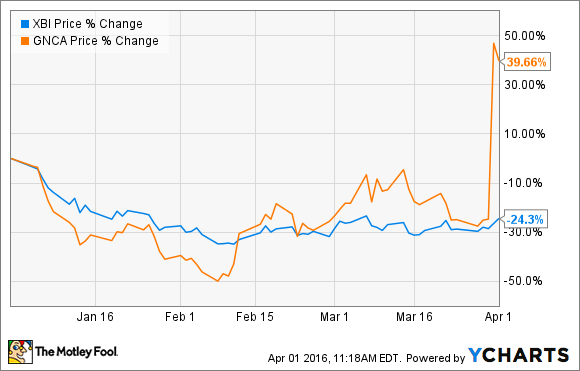 So what: The reason for the huge jump on Thursday had to do with results from a phase 2 trial for the company's lead compound GEN-003, a drug that Genocea is studying as a potential treatment for genital herpes.

The results from the phase 2 trial were highly encouraging as GEN-003 showed a statistically significant reduction in the rate of viral shedding over the entire 12 months period. Importantly, GEN-003 was shown to be safe and well tolerated by patient.

That's a great clinical result as GEN-003 showed similar efficacy when compared to currently antiviral treatment options. However, since GEN-003 only needs to be dosed once per year -- versus oral antivirals that have to be taken daily -- it holds the potential to be a far more convenient treatment options for patients.

Now what: The American Sexual Health Association estimates that there are 776,000 new cases of genital herpes diagnosed each year in the U.S. alone and roughly 400 million people around the world have the disease, so if GEN-003 can finds its way through the regulatory pathway, it could be staring down an enormous market opportunity.

It has already begun dosing of GEN-003 in another phase 2b trial that is aiming to confirm the efficacy of the drug with a phase 3 manufacturing process, and if that goes well, then it plans to initiate phase 3 trials in mid- to late 2017.

On the financial side, it ended the year with just over $106 million in cash on its books, which it believes will be enough to fund itself into the "second half of 2017." Since that is when it plans to start phase 3 trials of GEN-003, it's likely that it will have to raise more capital sometime over the next 12 months.

These results are clearly exciting, and it's great to see that Genocea is outperforming the XBI year to date, but investors should remember that it will be years before Genocea Biosciences could start to generate revenue from GEN-003. For that reason, only the most risk-tolerant investors should consider buying shares in this high-risk, high-reward company.

3 Scorching Hot Healthcare Stocks -- Are They Buys?
Can Genocea Biosciences Stock Rebound After a Rough August?