Please ensure Javascript is enabled for purposes of website accessibility
Log In Help Join The Motley Fool
Free Article Join Over 1 Million Premium Members And Get More In-Depth Stock Guidance and Research
By George Budwell - Sep 12, 2015 at 9:22AM

Genocea Biosciences fell victim to the stormy market in August. Is the stock now a bargain?

What: Shares of Genocea Biosciences (GNCA 51.07%), a small-cap biopharma developing developing T cell-directed vaccines and immunotherapies, dropped by over 10% in August, which was pretty much right in line with the drop in the broader biotech sector. 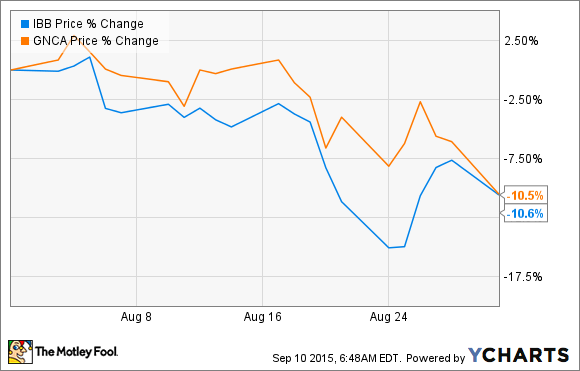 The good news is that this decline lacked an obvious catalyst and appears to mostly reflect the nearly-ubiquitous move lower by biotechs and biopharmas during the month.

So what: Mr. Market hasn't been kind to small-cap biopharmas in general lately, but he was particularly punitive when it came to stocks that were having a strong year, like Genocea. Specifically, the stock was up a noteworthy 71% prior to last month's downward move, despite the biopharma tapping the market twice for funds via secondary offerings: 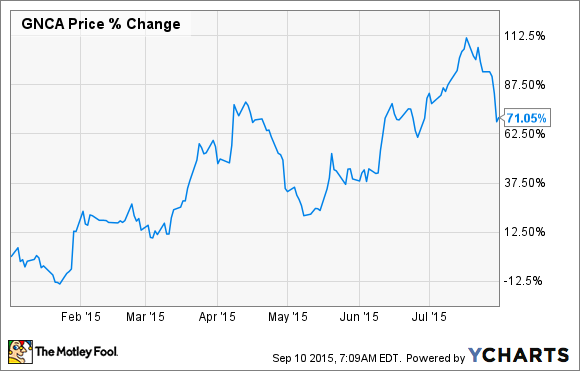 Now what: Genocea is setting up to have a rather eventful fourth quarter, with two mid-stage data releases expected for its universal pneumococcal disease vaccine candidate, GEN-004, and its immunotherapy, GEN-003, indicated as a treatment for genital herpes, respectively.

As the company is billing both experimental products as having blockbuster potential, investors should definitely keep their eyes peeled for these upcoming clinical updates. After all, a positive update for one or both clinical-stage products would probably result in a healthy move upward in Genocea's share price from current levels, given the company's sub-$300 million market cap, which seems small relative to the commercial opportunities presented by these two clinical candidates.

In light of the fact that both indications have proven to be stubbornly resistant to our best efforts to produce new therapeutic options in the past, though, I'm personally content to take a wait-and-see approach with this promising small-cap biopharma until these key experimental products progress further in the clinical testing process.

Why It's Been a Wild Few Days for Genocea Biosciences Inc.