Please ensure Javascript is enabled for purposes of website accessibility
Log In Help Join The Motley Fool
Free Article Join Over 1 Million Premium Members And Get More In-Depth Stock Guidance and Research
By Daniel B. Kline - Apr 2, 2016 at 6:46AM

It's about getting people in and out faster while also increasing how much they spend.

Starbucks (SBUX 2.03%) has leaned on technology to make its stores operate more efficiently.

Because the chain's cafes have only so much space for registers and production, the company has lessened its lines by allowing customers to order and pay through its app. Mobile Order & Pay, which is part of the chain's app, allows consumers to bypass the line, which lets the store put more of the people behind the counter into making drinks, preparing food, and otherwise serving customers.

It's an elegant solution that should lead to a higher capacity for sales in each location. It also has a side benefit of visually reducing the amount of people in line which might make stopping more attractive for a casual customer. 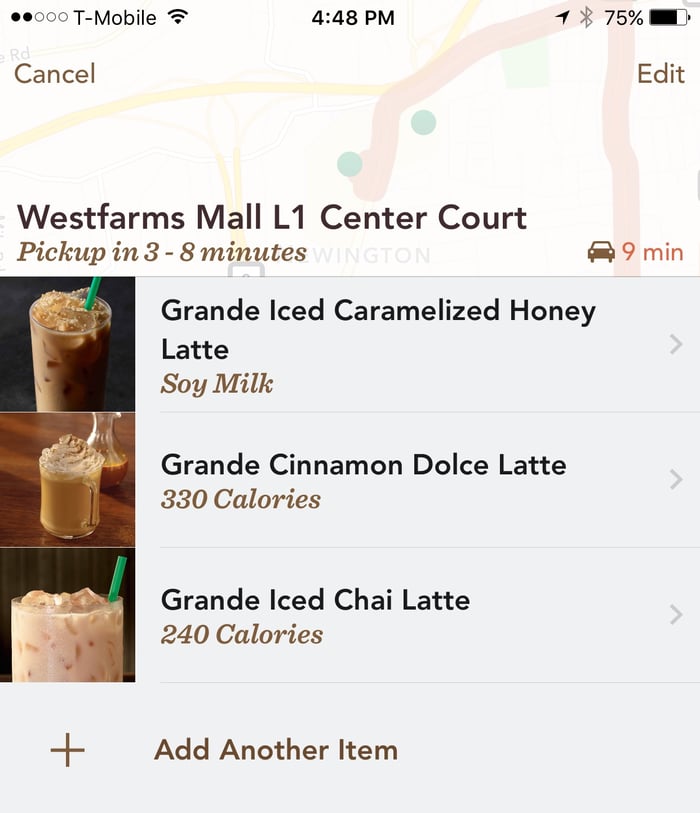 The Starbucks app makes it easy to order and pay.

Starbucks coffee rival, Dunkin' Brands (DNKN) also has a Dunkin' Donuts app customers can use to pay at the register, but it doesn't offer mobile ordering. It's possible that the company will add that feature soon, but before it does, it's trying a low-tech solution -- two variations on grab-and-go kiosks -- to increase its ability to serve more customers faster.

What is Dunkin' doing?
Like Starbucks, Dunkin' Donuts wants to make its stores more efficient so it can move people through faster. That creates a better customer experience, and it allows each location to do more business. The chain also wants to get people to spend more without pushing them into ordering more hard-to-make drinks or made-to-order sandwiches.

Instead of using a technology-based solution to do this, the coffee-and-doughnuts chain has begun testing self-serve kiosks at some of its locations, Nation's Restaurant News reported. The website cited Stephen Anderson, an analyst with Maxim Group, who wrote about the kiosks, which contain sandwiches and other prepared items including an Italian sub for $5.49 or a fruit-and-cheese platter for $6.29.

"We believe that morning customers may pick up an additional item, such as a sandwich or salad, for consumption later that day, while afternoon beverage customers can pick up a snack on the run," Anderson wrote. This type of kiosk can not only add money to orders; it adds efficiency because the line is not held up by people ordering sandwiches or other long-prep items.

In addition to the kiosks that feature lunch items, the chain also has a version of the concept at Connecticut's Bradley Airport that offers self-serve doughnuts, baked goods, and even self-pour coffee. The kiosk, which sits next to a full-service location, lets people skip the often-long line at the main store and instead opt to pay at an alternative register.

Both types of kiosks can help stores sell more while lessening wait time for customers.

What happens next?
Dunkin' Donuts needs to keep up with Starbucks when it comes to keeping its lines moving. Grab-and-go lunch items may help slightly, but that seems like more of an effort to pump up checks with impulse buys than a move toward efficiency. The airport kiosk with the chain's most-popular items, however, seems like a very strong way to move people through faster.

It's a low-tech answer to Starbucks that could increase customer satisfaction. The company could even enhance the convenience aspect by enabling kiosk payment through its app.

There are some logistic problems with that, given the possibility for theft at a self-serve location (a problem that seems evident at the airport location, where walking away with a doughnut appears pretty easy). But it seems Dunkin' could solve those problems and add kiosks to its highest-volume stores, making lines shorter, and keeping old-school coffee-and-doughnuts customers happy.