Please ensure Javascript is enabled for purposes of website accessibility
Log In Help Join The Motley Fool
Free Article Join Over 1 Million Premium Members And Get More In-Depth Stock Guidance and Research
By Travis Hoium - Apr 3, 2016 at 11:02AM

Apple has put hundreds of millions into solar energy to power its world-spanning business, and these two major players have been the biggest winners from that green strategy.

When Apple (AAPL 3.19%) announced that its operations worldwide are now run on 93% renewable energy, it didn't say a lot about the companies that built and operate the solar plants that provide it. But two in particular have played a central role in Apple's push into renewable energy so far, and will likely continue to in the future: SunPower (SPWR 9.27%) and First Solar (FSLR 4.64%).

A major buyer of green energy
Apple has used a variety of strategies to reach its renewable energy targets, including buying some from utilities, an option that's available for business and household customers in some parts of the country.

But it's increasingly choosing to own solar plants or buy solar power directly from partners like SunPower and First Solar. Below are a few of the deals those companies have made in just the last few years.

The fact that Apple chose to partner with First Solar and SunPower isn't surprising given their positions in the solar industry. Both have differentiated technology and consistent track records of building projects on-plan that produce the level of energy output expected. That's the kind of reliability Apple is looking for. 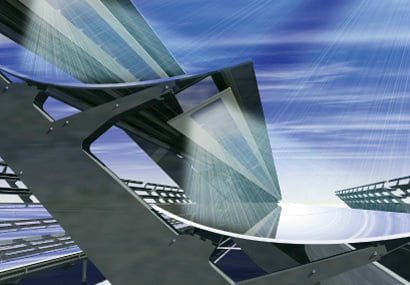 Apple owns power plants in the U.S. and China that use SunPower's concentrator technology, known as C7. Image source: SunPower.

Could another solar push be in Apple's future?
Apple's push into renewable energy could also point to future product developments. What Apple doesn't include in its renewable energy calculation is the amount of energy all of the devices it sells use on a daily basis. Could solar tech be a part of the iPads and iPhones of the future?

Apple has patented an embedded solar cell that can be put within touchscreens, where it would collect solar energy. Given that energy consumption is such a big issue for mobile devices, this could be a big value for consumers. Could technology from First Solar or SunPower be at the heart of such an innovation?

Whether or not Apple decides to incorporate solar cells directly into its products, it has clearly made a big bet on the technology powering its business for decades to come.

A big win for two solar giants
As companies like Apple expand their renewable energy footprints, it's important for investors to see who is winning that business. Apple is looking for partners that are reliable, have superior products, and will augment its brand. That's what SunPower and First Solar provide, and I think the fact that they're winning business from such an environmental leader shows that they'll be the partners of choice for many corporations in the future.