On the surface, ONEOK (NYSE:OKE) appears to be a rock-solid dividend stock. Not only does it offer a very generous 8.5% yield, but that yield is backed by a solid 1.3 times distribution coverage ratio. That being said, below the surface there are some concerns, not necessarily with ONEOK, but with its MLP ONEOK Partners (NYSE:OKS). Because of those concerns, and the implication they have for ONEOK, investors might want to consider some other energy dividend stocks instead.

Drilling down into the issues at ONEOK Partners

Lower oil and gas prices have created some challenges for ONEOK Partners because not all of its midstream contracts are fee-based. That has it directly exposed to commodity prices, which has put downward pressure on the company's earnings. It's a situation it is working to address by restructuring some of its contracts to fee-based contracts.

That said, even with those contract restructurings the company still will have some direct exposure to commodity prices. However, it estimates that it will still earn enough to completely cover its distribution, though with no room to spare. The problem is that this estimate is based on oil averaging $40 to $45 a barrel this year, which is not something it has done yet this year. Worse yet, if oil weakens it could cause the company to really miss the mark and possibly cut its distribution, which could impact the payout at parent company ONEOK. It's a risk that some investors might want to avoid this year.

A refined dividend growth story
While dividend growth certainly isn't in the cards for ONEOK investors, it's something that can be expected at Valero Energy (NYSE:VLO). In fact, after boosting its payout 80% last year, the company has already increased its dividend by 20% this year. It has plenty of room to keep increasing that payout because unlike ONEOK, which pays out roughly two-thirds of its cash flow, Valero's payout ratio is much safer, only in the mid-20% range: 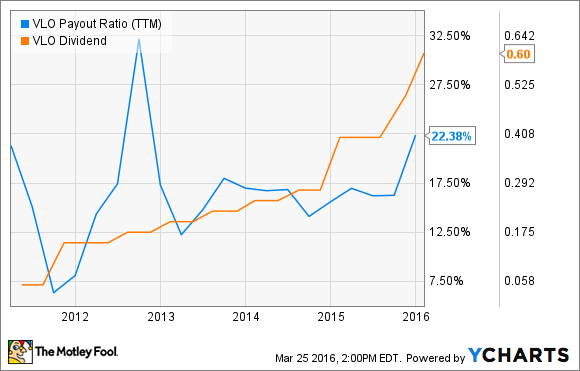 Not only does the company have plenty of room to grow its payout given that ratio, but it's actually the beneficiary of low oil prices. Those low prices not only reduce the input costs at its refineries, but they fuel stronger demand for gasoline. In fact, last year was the best year for gasoline demand in the U.S. since before the financial crisis, and demand this year has been coming in much higher than projected. All of which points to Valero's ability to increase its dividend even more this year.

An oil company with a boatload of cash
Oil and gas producers have been the hardest hit during the downturn due to their very direct exposure to those weakening commodity prices. That has forced a lot of these companies to reduce or suspend dividend payouts because they lack either the cash or the cash flow to both fund capex and their dividends. Occidental Petroleum (NYSE:OXY), on the other hand, has been able to avoid this pain thanks to a cash-rich balance sheet as well as outside sources of cash that are flowing into its coffers this year.

As of the end of last year Occidental Petroleum's cash balance stood at $4.4 billion. Furthermore, the company was expecting to receive another $900 million in cash from a legal settlement and $300 million in proceeds from asset sales. Add it up and the company's cash on hand alone can fully cover its expected $3 billion capex budget and its $2.23 billion dividend outlay with room to spare. That is before factoring in cash flow from operations, which last quarter was $944 million at a low-to-mid $40 oil price. In other words, this is an oil dividend that's not at risk of being cut in 2016 and could even head higher.

Investor takeaway
While the chance is remote that ONEOK will be forced to cut its payout this year, that doesn't diminish the fact that the risk is still there. Investors that want to avoid the risk of seeing their dividend cut this year, might want to take a look at Valero, Enterprise Products Partners, or Occidental Petroleum. All three companies have payouts that appear to be on solid ground in 2016, even if oil prices take another tumble.