Please ensure Javascript is enabled for purposes of website accessibility
Log In Help Join The Motley Fool
Free Article Join Over 1 Million Premium Members And Get More In-Depth Stock Guidance and Research
By Daniel B. Kline - Apr 3, 2016 at 9:41AM

Netflix (NFLX 0.58%) helps its users avoid overage charges from AT&T (T 1.67%) and Verizon (VZ 0.28%) by putting a cap on the number of bits per second at which it streams into mobile devices. Call it self-preservation for the streaming leader, where it also gets to look out for its customers and stick it to two not-always-cooperative partners

Netflix explained in a recent blog post that it has been throttling its content on mobile networks -- reducing the default bitrate to 600kbps -- to help customers avoid piling up charges for exceeding their data allotment. This prevents the carriers from making more money in overage fees, but it also benefits Netflix, which wants to make sure consumers don't exceed their data caps and then decide against future viewing, according to statements the company made to The Wall Street Journal [subscription required]. 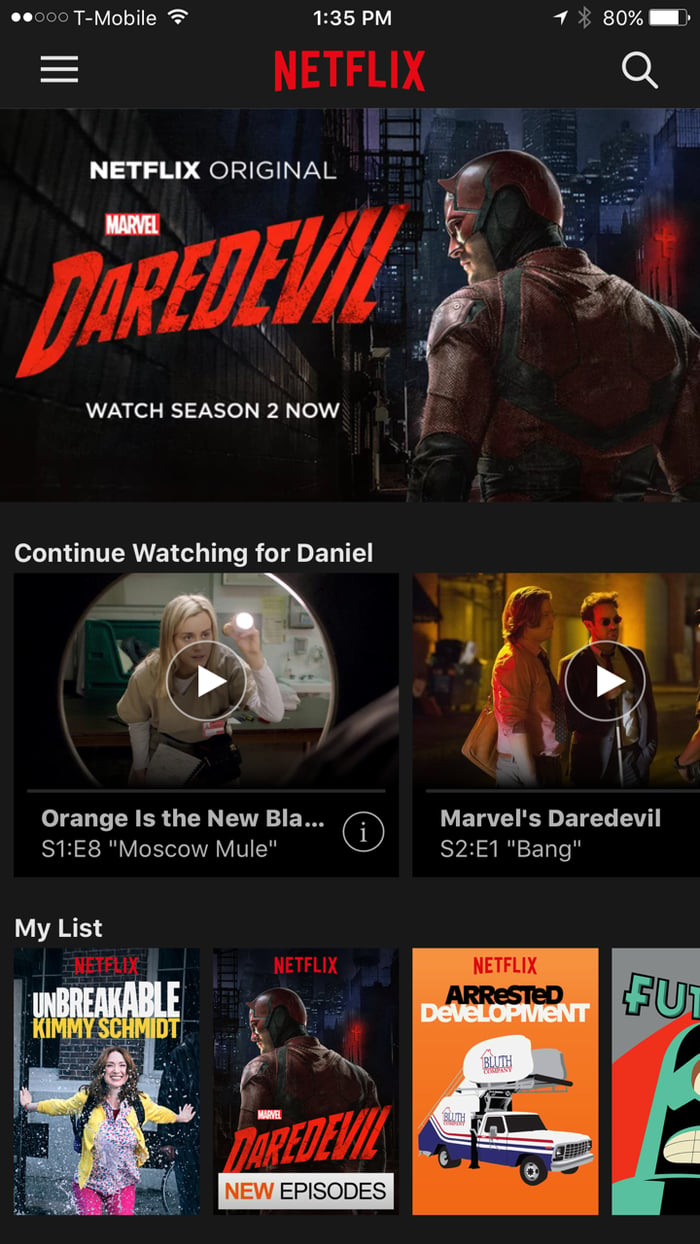 The Netflix app on a T-Mobile phone. Image source: screenshot.

Why is this coming out now?
Netflix has reportedly been throttling the streams to wireless partners around the globe, including Verizon and AT&T, for about five years. It doesn't slow down its service for T-Mobile (TMUS 3.06%) and Sprint (S) because "historically those two companies have had more consumer-friendly policies," the Journal reported. T-Mobile, for example, doesn't charge overage fees and instead slows down its networks after customers go over their allotment. Sprint has a similar policy for a portion of its user base.

The reason Netflix's slower speeds on A&T and Verizon became public is that T-Mobile CEO John Legere pointed it out in a recent video he posted on social media.

"Did you know that when you watch Netflix on T-Mobile you get it at 480p?" Legere asked. "And the duopoly is actually delivering your Netflix content at 360p. I'll bet you didn't know that. Go check; it's true."

The CEO was defending his company's Binge On service, which lets customers watch unlimited video that doesn't count against their data caps. His remarks were meant to point out that AT&T and Verizon customers may be getting less than they think. That's true, but it's actually because Netflix is taking action on their behalf, not because AT&T and Verizon, the duopoly Legere refers to, are doing anything.

Netflix, for its part, is simply against data caps and seems willing to help its subscribers thwart them.

"We believe restrictive data caps are bad for consumers and the Internet in general, creating a dilemma for those who increasingly rely on their mobile devices for entertainment, work, and more," Anne Marie Squeo, a member of the Netflix communications team, wrote in its blog post. Netflix users haven't complained, she wrote, as a lower resolution works fine for watching a movie on a phone as compared to a TV.

How does this hurt AT&T and Verizon?
AT&T and Verizon wouldn't want their customers to receive a throttled version of Netflix, because that affects their bottom lines. Both companies make billions from customers who either exceed their data plan or opt for a bigger plan than they need so as to not go over.

At the end of 2015, Legere said in his year-end message that consumers paid $2.5 billion in overages, 95% of which he said came from AT&T and Verizon. Overages are a hard number to define, because it's debatable as to whether a customer electing to add data on a one-time basis is really paying an overage, but consumers' perception that they're paying up big is clear, according to research from Cowen & Co.

"Nearly one in five cell phone customers reported paying overages during the past six months. But AT&T continued to lead all of its rivals -- 28% of AT&T customers told Cowen & Co. that they were charged for overages, compared to 20% of Verizon customers, 12% of T-Mobile customers, and 5% of Sprint customers," wrote CNN Money's David Goldman.

AT&T and Verizon want consumers to use more data, because if they do, more consumers will either increase their plan or pay overage fees.

What happens next?
Call this just another thing chipping away at the bond between AT&T and Verizon and their customer bases. It's easy to dismiss Legere when he points out the evils of overages, but it's less hard to dismiss the actions of a third party like Netflix.

Clearly, the streaming leader has struck a blow for its customers against the two wireless carriers. Whether that sparks any sort of outrage over a system built to force consumers into racking up bigger bills remains to be seen.