Please ensure Javascript is enabled for purposes of website accessibility
Log In Help Join The Motley Fool
Free Article Join Over 1 Million Premium Members And Get More In-Depth Stock Guidance and Research
By Sam Mattera - Apr 3, 2016 at 7:00AM

A large and reliable dividend payment can make almost any stock attractive.

Companies that return much of their cash to shareholders in the form of dividends may not offer the potential for as much growth as their lesser-paying counterparts, but they can provide a steady stream of income, boosting the returns of nearly any portfolio. Moreover, they're often less volatile stocks, with firmly established business models. A dividend yield of 3% is generally seen as adequate, but some stocks yield much more than that. Investors looking for even higher rates of return have many companies to choose from.

These two Detroit automotive titans are paying investors to hold their shares
American auto giants Ford and GM both boast impressive dividend yields. GM pays its shareholders $1.52 each year for every share they own; Ford sends out $0.60. That means GM and Ford are currently yielding about 4.87% and 4.55%, respectively. But that doesn't mean much if those dividends aren't sustainable. Fortunately, it doesn't seem likely that either will be cut anytime soon.

The dividend payout ratio is a useful tool for determining the likelihood that a given company can continue to pay its dividend. It compares the amount of cash the company pays out to shareholders each year with its annual net income. A company that's earning $1 per share annually but paying out $1.10 in dividends would have a payout ratio of 110%, and a tough time returning cash to its shareholders over the long haul (unless its business improved). Inversely, a company that's earning $1 but paying out only $0.10 would have a payout ratio of just 10% -- its business is producing more than enough income to cover the cost of that that dividend payment. GM's payout ratio is just 23.14%. Ford's is a bit higher at 32.28%. Neither would be considered extraordinarily low, but they aren't high either.

Of course, a sharp decline in the market for automobiles could take a toll on their earnings. But fuel remains inexpensive -- great for Ford and GM's higher-margin SUVs and trucks -- and the average American car is still more than 11 years old. Both stocks are inexpensive, with trailing price-to-earnings ratios in the single-digits.

If you're looking for a stock that's yielding more than 4%, it would be hard to find a more attractive buy than either of these auto titans.

The PC market is shrinking, but HP is returning capital
But if you're not interested in either auto-maker, HP presents an interesting opportunity. The company, which split from Hewlett-Packard last year, is the world's second-largest PC-maker. It currently yields 4.11% and sports a payout ratio of just 30.87%. Like GM and Ford, it's a cheap stock on a valuation basis, with a price-to-earnings ratio just under 6. 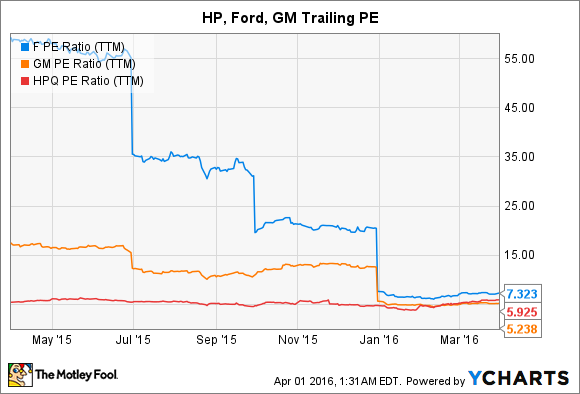 HP is cheap for a reason. Last quarter, about 60% of its revenue came from the sale of traditional desktop and laptop PCs. The remaining portion came from printers. Both businesses appear to be challenged by newer technology -- in an increasingly digital world, the relevance of paper is slowly slipping. Meanwhile, a growing number of consumers and even business users are replacing their PCs with mobile devices. In the fourth quarter of 2015, PC shipments slipped 10.6% on a global basis.

Nevertheless, there's still strong demand for PCs. Global PC shipments topped more than 276 million in 2015, and there are still hundreds of millions of PCs in use. More than 600 million of them are at least five years old, suggesting that a PC upgrade cycle is possible.

Should the market for its products stabilize, HP could reward shareholders. In the meantime, it will pay them a respectable dividend.

Worried About a Prolonged Bear Market? Rest Easy With These 3 Dividend Stocks