Please ensure Javascript is enabled for purposes of website accessibility
Log In Help Join The Motley Fool
Free Article Join Over 1 Million Premium Members And Get More In-Depth Stock Guidance and Research
By Anders Bylund - Apr 4, 2016 at 8:48AM

One of these stocks is for gamblers, while the other one should appeal to growth and value investors alike. Which one's which? I bet you just guessed wrong.

Microsoft (MSFT 1.14%) and Amazon.com (AMZN 3.06%) are two of the most heavily traded and commonly owned stocks on the market. Would either one be a good fit for your investment strategy?

By the numbers
Amazon is a relentless growth engine. The e-tailer's trailing revenues recently passed Microsoft, which is dealing with a recent blunting of its formerly impressive sales growth. 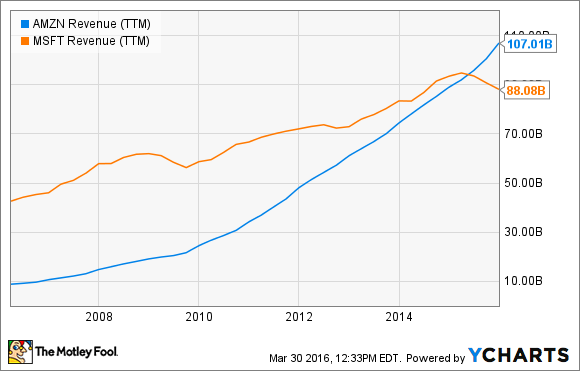 On the other hand, it is well known that software sales carry much wider profit margins than Amazon's online retail operations. Amazon's operating margins are razor-thin at best, and Microsoft looks downright impressive by comparison.

The story doesn't change much if we drop down to the cash flow line, where Redmond's annual winnings run more than three times as rich as Amazon's. However, there's a wind of change blowing here: 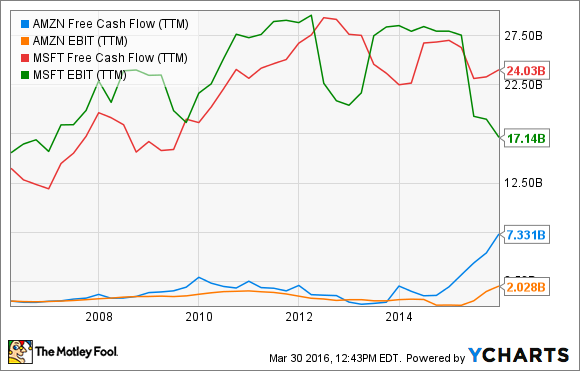 Microsoft is now trading at 16 times trailing cash flows. That's up from 10 times free cash a year ago, as Microsoft's free cash flows shrank by 11% while the company's enterprise value rose 40% higher.

Meanwhile, Amazon's cash flows nearly quadrupled, but market prices only rose by 60%. Thus, the enterprise value-to-free-cash-flow ratio dropped from 53 to 36.

In other words, Microsoft's stock is becoming more expensive while Amazon is quickly growing into its generous valuation. Another couple of years like this, and Amazon would become the obvious value pick in this duel.

What's next?
Of course, no one knows exactly how much further Amazon's current growth spurt will last, how much of it will drop down to the free cash line, or how mellow the market reaction to such a romp would be. But it's clear that Amazon's fortunes no longer live and die by online retailing alone. That once-silly little Amazon Web Services division is now pulling its weight, supplying 7% of Amazon's total sales in the recently reported fourth quarter of 2015 -- but 39% of Amazon's operating income.

The dominant AWS operation positions Amazon as a whole for many years of continued growth, regardless of what happens in the online retail market. That retailing segment, of course, is still kicking butt and taking names in its own industry, giving Amazon a stable financial platform from which to launch AWS and other innovative projects without betting the entire farm.

So Amazon takes the prize for both growth and value investors here. Is there anywhere left for Microsoft to go?

But of course. Under the refreshingly open-minded leadership of CEO Satya Nadella, Redmond has become a turnaround story on a grand scale.

Nadella embraces ideas that predecessor Steve Ballmer would have thrown a chair at, including open-source development and settling for second place when winning isn't worth the investment.

For example, Windows 10 is not only a free upgrade for millions of old-school Windows users, but an automatic and nearly required one in many cases. That would never have happened under Ballmer's "show me the money" reign, even though it's almost certainly the only approach that can keep Microsoft relevant for the long-term future.

Buying Microsoft means accepting the risks that Nadella invites, and betting that the rewards will be worth it. If Nadella's vision works out as planned, his company might retake the growth-stock favorite mantle that Amazon holds today. But that's by no means a guaranteed outcome.

For the first time in forever, Amazon is the safe play while Microsoft balances huge risks against -- considering Redmond's currently low-key valuation ratios -- even larger potential rewards. Amazon is for level-headed investors, and Microsoft is for the gamblers among us.