Investors have not been kind to Sierra Wireless (SWIR -2.42%) and InvenSense (INVN) over the past 12 months. Sierra is down 56% and InvenSense has dropped 47%, and both have a long road ahead of them before they recover. But one of these stocks seems to have a much better chance of seeing that happen. 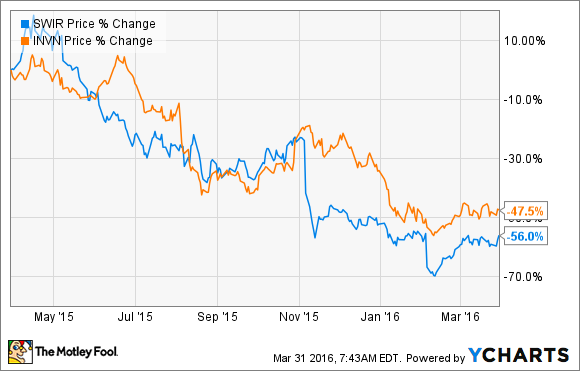 First, let's talk about why these stocks have fallen so hard over the past year.

Sierra Wireless' problems
Some of Sierra's more recent problems stem from two quarters of bad -- though not terrible -- news.

In Q3 2015, earnings failed to meet management's guidance, which was the first time that had happened in years. Then enterprise notebook makers didn't order as many 4G connections Sierra had anticipated, which pushed down the company's OEM solutions revenue.

Things got worse from there, as the company's automotive clients pushed back orders that were supposed to come in in Q3 2015 to later in the year and into 2016.

That may have attributed to Sierra Wireless missing guidance once again in the following quarter, leaving two consecutive quarters of missed guidance.

InvenSense's problems
As bad as Sierra Wireless has been, InvenSense appears a bit worse. The company's stock has suffered in part because of InvenSense's over-exposure to Apple (AAPL 0.17%).

The iMaker uses InvenSense's sensors in its iPhones, but notably left the company's sensors out of the Apple Watch last year. It was a big miss for InvenSense, not only because of its relationship with Apple but also because InvenSense was one of the leading suppliers of motion sensors to smartwatch makers at the time.

Additionally, news of an iPhone sales slowdown has scared InvenSense investors. They see the company's fate being closely tied to iPhone sales, and if those aren't moving in the right direction, then neither is InvenSense.

And then there's Samsung. The South Korea-based conglomerate chose not to use Invense's motion sensor for its new Galaxy S7 devices. Samsung used to compose about 18% of InvenSense's total revenue, but the company's management said that that percentage will likely fall to single digits because of Samsung's recent decision.

Which stock could bounce back
Neither company is in a great position right now, honestly. But Sierra Wireless does appear to have better prospects than InvenSense.

Sierra has made some major OEM wins recently, and the company could start to see this pay off soon. Sierra Wireless is also focusing new attention on its cloud services and broke out the segment recently in its quarterly filings. The cloud business offers Sierra an opportunity to diversify some of its revenue streams, though it might take time before that happens.

Admittedly, it won't be an easy road to recovery for Sierra Wireless. But I think the company has a better chance of turning things around than InvenSense does. Invnensense will probably continue to suffer from its over-exposure to Apple and Samsung. And a slowing smartphone market will only make matters worse.

Sierra Wireless investors may have to stomach some more turbulence, but it'll likely be a smoother ride than InvenSense will have.