Please ensure Javascript is enabled for purposes of website accessibility
Log In Help Join The Motley Fool
Free Article Join Over 1 Million Premium Members And Get More In-Depth Stock Guidance and Research
By Cory Renauer - Apr 5, 2016 at 7:22AM

A string of recent clinical wins with partner Sanofi makes Regeneron look like a winner, but this Fool believes investors will find these two companies better suited to their investing goals. 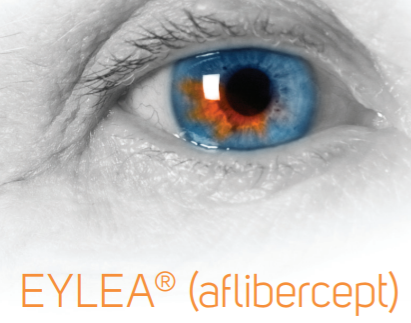 Clinical-stage success with sarilumab in an important niche of rheumatoid arthritis patients, and more recently with dupilumab in certain eczema patients, could very well lead to two more future blockbusters. With a bit of luck -- in the form of initial approvals, label expansions, and commercial success -- these three drugs from the partnership between Sanofi and Regeneron could reach combined peak annual sales of roughly $10 billion.

With so much to look forward to, you probably think I'm crazy to suggest any healthcare companies are better buys than the rising star of Tarrytown, N.Y. Give me a few more minutes and I'll show you why conservative investors with tuition payments and retirement needs approaching would probably do better adding Gilead Sciences (NASDAQ: GILD) or Amgen (NASDAQ: AMGN) to their portfolios.

Why not Regeneron?
Regeneron investors that have been holding on to their shares for the past five years have watched their stock grow from $50 to over $600 at one point, as sales of anti-VEGF eyeball injection Eylea exploded around the globe. The downside to such success is now the $3.24 billion in 2015 Eylea sales recorded comprised nearly 79% of Regeneron's total revenue of $4.10 billion for the period.

Relying on one drug for 79% of revenue is pretty scary, but the situation is actually much worse. Nearly all of Regeneron's non-Eylea revenue last year came from the Sanofi collaboration. Sanofi only recorded $10.4 million in Praluent sales last year, and Regeneron's share of losses in connection with commercializing partnered antibodies, such as Praluent, was $240 million. The vast majority of the $758.9 million in collaboration revenue Regeneron recorded last year from Sanofi was for reimbursement of R&D and commercialization expenses incurred during their collaboration.

In a nutshell, Eylea is responsible for practically all of Regeneron's product sales, but it's not the only anti-VEGF eyeball injection used to treat the handful of indications it's approved for. Roche's Lucentis, priced at about $2,000 per dose, won its first FDA approval five years ahead of Eylea but quickly lost market share in part because Regeneron set a price of $1,850 per dose.

What should have Regeneron shareholders terrified, though, is ophthalmologists' tendency to use another of Roche's anti-VEGF drugs, Avastin, off-label in place of either Eylea or Lucentis. Approved and distributed as an intravenous infusion for treatment of a handful of different cancers, preparing Avastin for intraocular injection is no walk in the park. But at about $50 per dose, budget-minded healthcare providers are often willing to make the effort.

The medical community has been debating which of the three is superior in terms of safety and efficacy in different populations for years. I'm not about to open this can of worms, but I will say off-label use of Avastin for Eylea's indications presents a value proposition that's hard to ignore.

Increasing scrutiny of pricey specialty drugs, including Eylea, made ignoring off-label usage of Avastin difficult heading into the last months of 2015. In February, Regeneron guided U.S. sales of Eylea to decelerate from 54% growth over 2014 to "approximately" 20% growth over 2015 -- making the Avastin issue front-and-center.

Eylea could continue growing at 20% annually. Praluent, sarilumab, and dupilumab could all become multibillion-dollar blockbusters, and Regeneron's share of their combined sales could overtake Eylea. But with the stock trading around 74 times trailing GAAP earnings, all this had better come true, or investors buying Regeneron at recent prices could face heavy losses.

Gilead Sciences: Less near-term growth potential, more certain returns
With Merck's Zepatier entering the hepatitis C space at a list price of $54,000, Gilead Sciences' Harvoni is certain to feel some pressure. Although, given the proprietary nature of rebate and discount arrangements, just how much pressure is guesswork at best.

The good news is that Gilead's stock is trading at less than 8 times trailing earnings. With over $19.5 billion in free cash flow generated last year, the company could tread water for years and you would enjoy double-digit returns in the form of dividends and share repurchases. 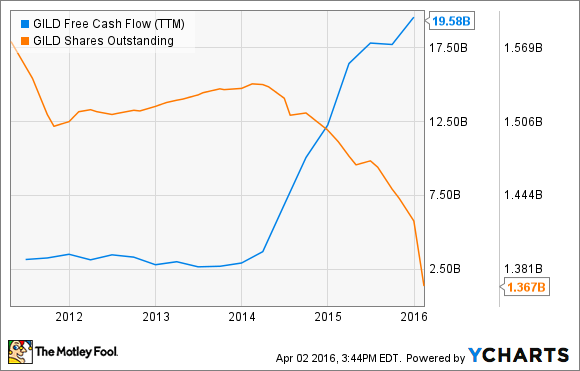 This company is shoveling cash into its shareholders' accounts. At recent prices, the stock offers a 1.9% yield. Last year's dividend payments were just 9.6% of the free cash flow generated, so there's room for big increases in the years ahead. In early February, when the company's shares dipped, the board quickly approved the repurchase of $12 billion of its shares, in addition to the existing $15 billion repurchase program authorized last January.

While Gilead is a great investment even if earnings remain flat, I'm expecting them to increase somewhat in the years ahead for two simple reasons. First, Gilead's blockbuster hepatitis C treatment Harvoni is still a favorite among physicians because of its superior safety profile. Also, the number of infected patients in the U.S. left untreated is staggering. Meanwhile, Gilead also sports a very profitable HIV drug franchise and has some intriguing candidates in the pipeline in multiple therapeutic areas, including oncology.

Amgen: A more diverse, more expensive cash machine
If Gilead's reliance on its hepatitis franchise disturbs you, especially in the wake of recent patent litigation, consider Amgen. Its dividend yield of 2.7% is far more attractive than Gilead's at the moment. Its diverse product line generated $8.5 billion in free cash flow last year, or more than 3.5 times what it needed to make 2015's dividend payments. I feel Amgen's future is less certain than Gilead's, but at about 16.5 times trailing earnings it's far more expensive.

Enbrel and Neulasta combined for about 48% of Amgen's product sales last year. The European Commission has already greenlighted a biosimilar version of Enbrel. In the U.S., the FDA accepted Neulasta and Enbrel biosimilar applications from Novartis last year, but patents granted to Amgen in 2011 may keep Enbrel competition at bay through 2029. Amgen is currently suing Novartis for infringing on those patents, which could allow Amgen to continue racking up more than $5 billion in annual U.S. Enbrel sales.

A couple of months before suing Novartis for piggybacking on the fruits of its trailblazing efforts with Enbrel, Amgen announced the FDA accepted an application for its biosimilar version of AbbVie's tremendously successful Humira, an arthritis therapy that brought in U.S. sales of $8.4 billion just last year.

Beyond biosimilars, Amgen has a cholesterol therapy similar to Regeneron's called Repatha and is arguably doing a better job of getting it into the hands of a larger patient population. At the American College of Cardiology's annual session, Amgen presented a slew of data making a case for its use in patients who can't tolerate statins.

One final hang-up
Amgen reaching a larger patient population first may be the least of Regeneron's worries with Praluent. A jury decision made in Federal Court last month could keep Praluent off the U.S. market entirely... or not.

Confounding the entire process however, the court somehow dismissed Sanofi and Regeneron's case on obviousness before it went to the jury.

While I'm inclined to believe the court's dismissal overrides the jury's findings, Regeneron investors will want to look into federal court Judges' abilities to travel back through time to dismiss defendants' cases after juries find them guilty.

There is a very important takeaway here: At about 16.5 times trailing earnings, and with more than one current source of revenue, Amgen doesn't need Repatha to succeed. Regeneron, on the other hand, is trading at a multiple that insists Praluent, sarilumab, and dupilumab will all become blockbusters and Eylea sales will continue growing by double digits.

So far, things aren't looking great for Praluent, and company guidance for Eylea was hardly reassuring. Regeneron's an incredible company, but at recent prices, Amgen and Gilead are far better buys.