What: Superior Energy Services' (NYSE:SPN) stock climbed 30.2% in March thanks to better than expected earnings at the end of February, some favorable guidance figures for 2016, and an analyst upgrade.

So What: Like several of its oil services peers, Superior Energy Services saw its earnings swing deep into the loss column as it took several asset write downs and other one time charges to the income statement. After stripping out the $1.17 per share loss for those charges, the company's $0.41 per share loss was slightly better than analyst expectations.

Most of those gains came from Superior's recent cost cutting. Since the beginning of oil's decline, Superior has reduced its workforce by 40% and has also cut SG&A costs by 35% compared to 2014. So despite seeing large declines in service revenue, it has been able to stave off massive losses that could really hurt the company.

Ever since the company reported earnings after the market closed on February 22nd, Superior's shares have been on a strong upswing. Of course, some of that may also have to do with the price of crude oil seeing some strong gains over the same time period. 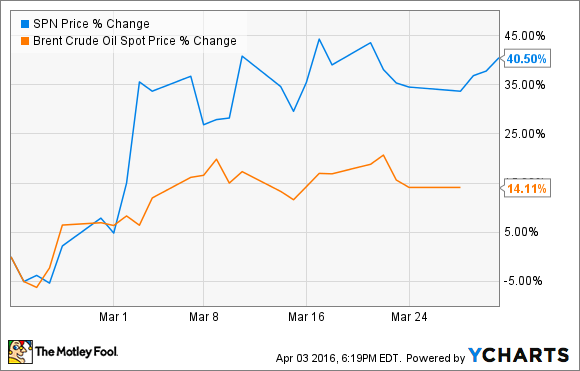 Now What: Seeing Superior make such drastic cuts to its workforce and remaining cash flow positive suggest that the company will come out of this energy industry downturn in relatively good shape. Its balance sheet today is pretty much in line with its larger peers and its cheap valuation does hint at a strong rebound when the market for oil and gas turns. At the same time, though, Superior has consistently lagged behind its larger peers in generating returns on invested capital and returns on equity. 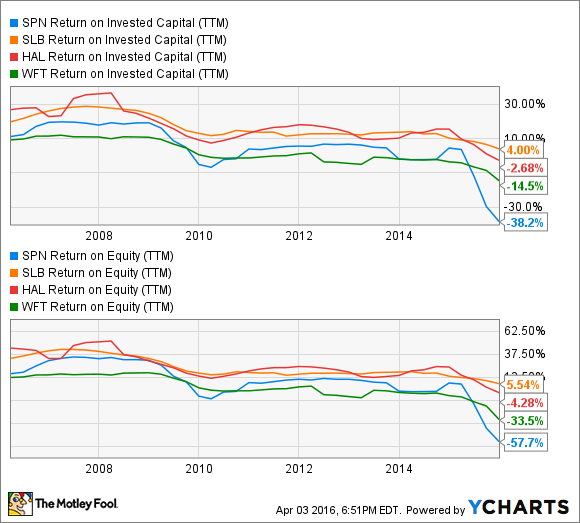 Investors that are looking for that business that will continue to outperform may be tempted to look at Superior's cheap stock valuation as a chance to ride the wave of increasing oil prices, but if you are looking for an investment to hold on through multiple commodity cycles, then Superior Energy Services still doesn't quite stack up to its larger peers.