Please ensure Javascript is enabled for purposes of website accessibility
Log In Help Join The Motley Fool
Free Article Join Over 1 Million Premium Members And Get More In-Depth Stock Guidance and Research
By Lee Samaha - Apr 7, 2016 at 9:53AM

The industrial supply company is anticipating an improvement in the economy. But does it show up in the second-quarter numbers?

MSC Industrial Direct Co. Inc.'s (MSM 1.55%) second-quarter results were a mix of positives and negatives, and there is something in them for glass-half-full and -empty proponents. Its end markets aren't improving, but they aren't getting much worse. The company continues to execute well and maintain gross margin, but sales growth is disappointing. It was truly a mixed quarter, so let's take a closer look at the details and what to expect going forward.

MSC Industrial's second quarter: The raw numbers
In common with fellow industrial supply companies, Fastenal Company (FAST 3.05%) and W.W. Grainger (GWW 2.71%) have been flying high in 2016. It's a sign that the market is anticipating a bottoming process in U.S. industrial conditions. However, the evidence from MSC Industrial's second quarter is tantalizingly vague. The headline numbers: 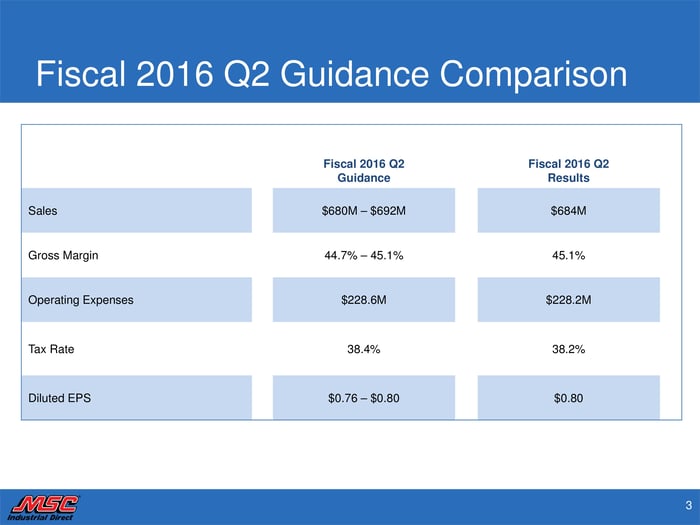 As you can see above, revenue came in below the midpoint of guidance -- a sign that end-market conditions were weaker than expected -- but the company executed well with gross margin at the high end of expectations and operating expenses below guidance.

In addition, management claims that MSC Industrial is gaining market share -- a key objective as part of its expansion strategy. In one sense, a depressed marketplace throws up opportunities for the large players such as MSC, Fastenal, and Grainger to grab share in what is a highly fragmented market.

Into the details
A look at average daily sales growth by month shows how the improvement seen in December failed to carry through into MSC Industrial's second quarter. This is somewhat disappointing given that Fastenal and Grainger had both reported relative improvement in early 2016. 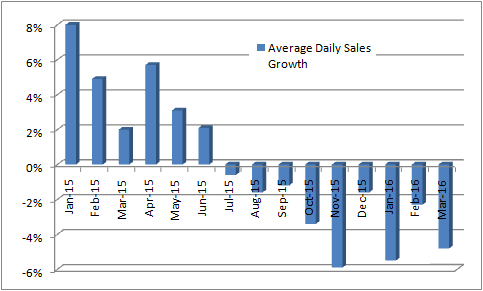 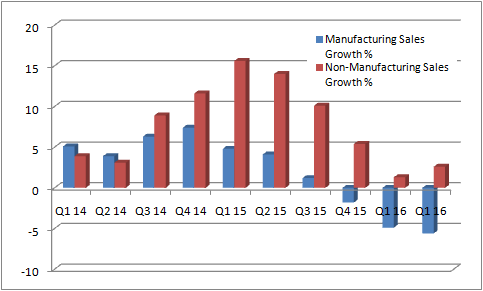 Guidance and management commentary
On a more positive note, management's guidance indicates that conditions are likely to get better. A brief summary of company expectations for the third quarter:

Also, commentary on the earnings call suggested overall conditions were stabilizing. CEO Erik Gershwind said, "We just completed a survey of our customers and the prevailing sentiment is that business will at least stay the same and possibly improve in the months ahead," and he then described how "we historically see roughly a four-month lag between movements in sentiment indices and our growth rates."

In other words, the current numbers may not look good, but conditions appear to be stabilizing and could improve in a few months' time.

It won't be plain sailing
However, any improvement is unlikely to be linear or even consistent. As you can see in the average daily sales chart (second chart above), sales are erratic and sensitive. On the earnings call, CFO Rustom Jilla described how March started strongly but then descended into "mid-month softness" led by weakness in oil and gas and heavy equipment and machinery, the usual culprits.

More surprising was the "weakness in aerospace driven by a push out in orders of commercial aircraft and in government, the timing of quarter-end budget crunches." It's a salutary reminder of how uneven and bumpy the recovery since 2010 has been. Assuming that, end demand will grow in an orderly fashion.

Looking ahead
In the third quarter, investors will be looking to see if the relatively better industrial data translates into some improvement -- or at least stabilization -- in MSC Industrial's sales growth. Meanwhile, management needs to carry on executing and increasing productivity while grabbing market share. In the end, these actions will prepare the company for substantive margin expansion, if and when sales start growing again.

All told, MSC Industrial is executing well, and there are signs of improvement to come, but it hasn't shown up in the results just yet.