With a dividend yield well north of 10%, BP Prudhoe Bay Royalty Trust (NYSE:BPT) certainly catches an income-focused investor's eye. However, before pulling the trigger and putting that generous income stream into your portfolio, there's something you need to know. That income stream is projected to cease as early as 2020 given where oil prices are right now.

According to the most recent annual report from BP Prudhoe Bay Royalty Trust, the trustee that oversees it estimates that "royalty payments to the Trust will continue through the year 2020, and would be zero in the following year. Further, no proved reserves are currently attributed to the BP Prudhoe Bay Royalty Trust after that date." In other words, given where things stand right now, the trust's income stream will run dry in less than five years, leaving investors with worthless paper. 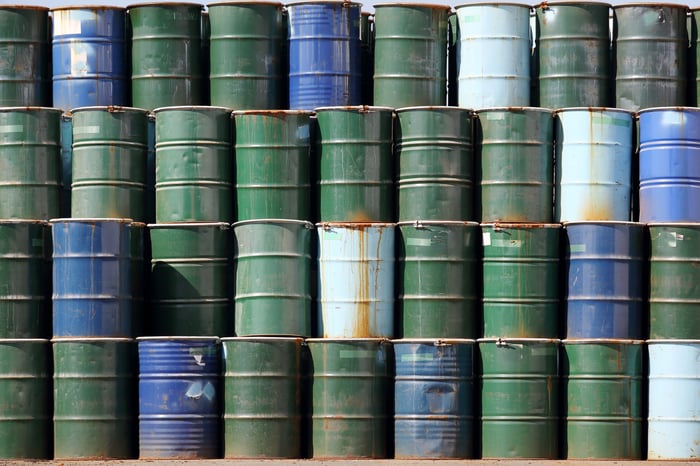 Betting on a rebound
With oil now half of where it once was, British oil giant BP (NYSE:BP) has scaled back its activity in the Prudhoe Bay area, which has an impact on current and future production from the area. Earlier last month the company cut its active rig count from five down to two rigs. With that cut back, BP is one of a growing number of oil producers that have cut back investments in Alaska because it's just not economical at current oil prices.

Having said that, while the value of the oil and gas underneath Prudhoe Bay has fallen along with commodity prices, the oil resources still remain in place. That's important because those resources could continue to be produced beyond 2020 should oil prices improve. Therein lies the pitfall and the promise of BP Prudhoe Bay Royalty Trust. If oil does stay lower for longer than this Trust will die a slow death over the next five years. However, if oil rebounds sharply and eventually reclaims triple digits then it would breathe new life in the trust. In other words, an investment in BP Prudhoe Bay is a bet on higher oil prices in the future.

That's something that at least at the moment is very up in the air. Having said that, the oil market is driven by two factors: Supply and demand. These are the two factors that caused the recent oil crash after surging supplies were met by weaker-than-expected demand. However, in recent months these two factors have reversed course, with demand growth strengthening while supplies are coming down. As such, oil prices are starting to strengthen and could continue to do so in the years ahead after two years of under investment and lower oil prices put even more upward pressure on demand and downward pressure on supply. In other words, don't start digging the grave of BP Prudhoe Bay just yet.

Investor takeaway
BP Prudhoe Bay has really become a binary investment. If oil stays lower for longer it's likely to die a slow death as it depletes its economic oil reserves by the dawn of the next decade. That said, if the oil market recovers, it would breathe new life in the trust because it could continue to produce its reserves for another decade or more. So, while the investment certainly isn't suitable for most investors, its death might not be as imminent as it would appear at the moment.