MasterCard is looking to partner with the tech giants, but it's not clear what for. 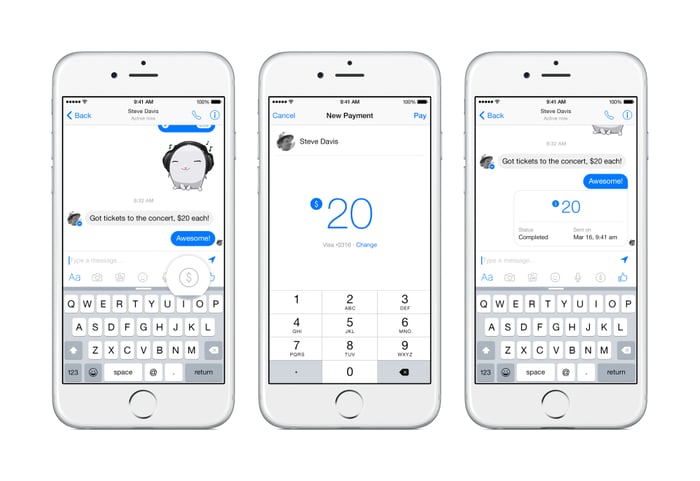 As shoppers go from swiping plastic to digital payments, MasterCard (MA 2.27%) doesn't want to be left behind. The company is already partnering with multiple tech companies, including Apple and Google for Apple Pay and Android Pay, respectively, but it wants to add a couple more to the list. CNBC reports the credit card issuer is in talks with both Facebook (FB 0.08%) and Twitter (TWTR 2.79%) to develop products in partnership with the social networks.

Details were sparse, as it seems not even MasterCard is sure of what they could do together. "We would figure out what we can do together, where our network could play into their space and connect up," Ann Cairns, president of international markets at MasterCard, told CNBC. Facebook and Twitter both have a lot of users and data. So, what could MasterCard offer to help?

Peer-to-peer payments
"If you think about somebody like Facebook, it would probably be something like a P2P (peer-to-peer) service," Cairns noted in her interview. Facebook already has a peer-to-peer payment feature within Facebook Messenger, but it doesn't have any formal relationships with either MasterCard or Visa (V 2.31%), the two biggest credit and debit card issuers. Instead, it uses debit cards to acquire bank account information and transfers money directly to bank accounts.

Facebook has indicated in the past that it's not looking to make money directly from payments, so any break MasterCard can offer could be passed on directly to users. While it's unlikely Facebook would shun Visa or other card issuers, MasterCard may get preferential treatment if it strikes a deal with the social network.

Twitter has experimented with peer-to-peer payments in the past and still operates a "buy" button for ad purchasers. Last year, it expanded deeper into commerce with Collections and pages dedicated to specific products. Clearly, there's room for MasterCard to partner with Twitter in those areas, but it's not obvious that's where Twitter (or MasterCard) wants to head with its product.

Jack Dorsey wrote in his fourth-quarter letter to shareholders that Twitter is all about "live" content. Twitter is most active during big events and when news is breaking, and it's hugely popular with publishers that use the platform to disseminate their content. This is purely speculation, but Twitter could partner with publishers for micropayments or paywalls for content, and MasterCard may be interested in processing those fees. That would take advantage of both company's networks, as Cairn indicated.

Beating Visa and the digital competition in e-commerce
About 18 months ago, Visa launched Visa Checkout to increase its share of the online payment processing market. So far, the company has more than 10 million registered users and more than 250,000 registered merchants, representing $100 billion in addressable sales volume.

MasterCard is more quiet about the status of its digital wallet, MasterPass, which supports both online and in-store sales. However, it was keen to note the platform is now available in 29 countries, nearly twice as many as Visa Checkout.

As more sales move online, it's important for both Visa and MasterCard to maintain their brand identity as shoppers opt to use more digital platforms like PayPal and other payment options. Visa Checkout and MasterPass are just two attempts by the stalwart card issuers. Partnering directly with two of the biggest Internet companies in the world would go further to help MasterCard overcome the digital competition and improve its position to win payment processing revenue.