Please ensure Javascript is enabled for purposes of website accessibility
Log In Help Join The Motley Fool
Free Article Join Over 1 Million Premium Members And Get More In-Depth Stock Guidance and Research
By Daniel B. Kline - Apr 7, 2016 at 1:20PM

A rumor that makes a lot of sense has made the rounds, but will it actually happen?

Speculation that TiVo (TIVO) might be acquired by Rovi (NASDAQ: ROVI) sent shares in the former,  which makes set-top digital video recorders (DVRs), moving in the right direction last month. 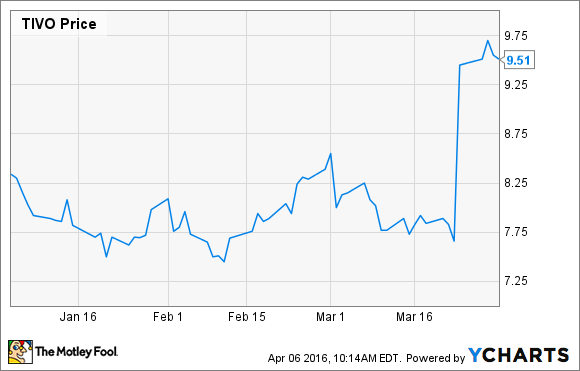 What: Multiple media reports that the two companies were talking pushed TiVo shares out of the general malaise they had been in for not just March, but really the entire year. After closing at $8.39 on Feb. 29, TiVo shares finished the month at $9.51, a 13.34% increase, according to data provided by S&P Global Market Intelligence.

So what: TiVo and Rovi are in complementary businesses and the two companies appear to be a good match. Fellow Fool Dan Caplinger explained how the two brands would work well together in a piece written at the time the rumors broke:

Recently, TiVo has focused its efforts to make deals with cable and satellite television providers to give customers access to its set-top boxes or to incorporate DVR technology into the boxes that the TV providers themselves offer their customers. Given Rovi's work in providing copy protection, software licensing, and other features on set-top boxes, DVRs, and other devices, the combination with TiVo seems like a natural fit.

The potential acquisition also comes at a time when the Federal Communications Commission (FCC) has moved toward opening up the set-top box market. That may increase TiVo's value as it's really the only player in the space already operating in competition with the major cable providers.

Now what: So far this is all speculation and it's never wise to invest based on hopes for a merger or acquisition. A deal makes sense and it seems pretty clear the two companies are talking, but it's a long road from that to an actual deal. If an acquisition or a merger moves forward, then this stock increase should stick because Rovi would likely pay some premium over market in order to buy the company. But, if this turns out to be talk with no action, then these gains will fade over time as hope for a deal dims.