Please ensure Javascript is enabled for purposes of website accessibility
Log In Help Join The Motley Fool
Free Article Join Over 1 Million Premium Members And Get More In-Depth Stock Guidance and Research
By Jay Yao - Apr 9, 2016 at 11:15AM

Given the record inventories and burgeoning oversupply, natural gas has fallen out of favor with investors. The following are factors that might help natural gas balance itself and send prices higher.

The stars have not aligned for natural gas producers. The combination of a warmer-than-expected winter and resilient production has led to record inventories and sub-$2 per thousand feet gas prices. The unfavorable environment has depressed stock prices for sector leaders such as Range Resources (NYSE: RRC) and EQT Corporation (NYSE: EQT) and has hurt less-capitalized companies even more. Although the spot price for natural gas remains weak, there are nevertheless some reasons for investors in these beaten-down gas-producers to have some cautious optimism.

3. The lower rig count will eventually translate to lower supply, and the moderate weather won't last
Although supply has been remarkably resilient, the natural rig count hasn't been. According to Baker Hughes, there were only 89 operating natural gas rigs for the week of March 18, down 5.32% from the previous week and off by 63.22% from a year ago. 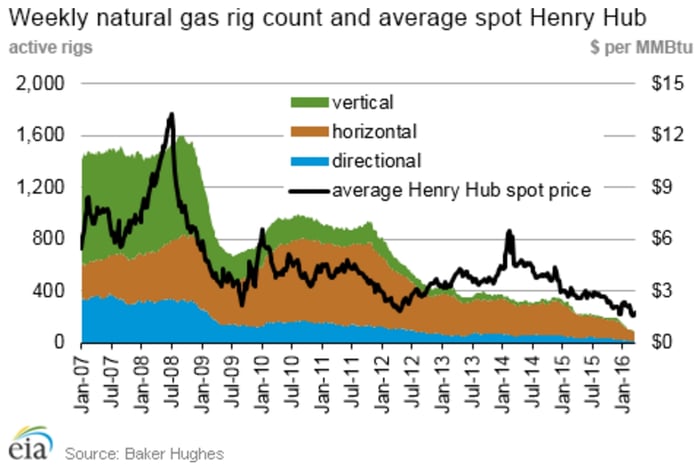 The low rig count is bullish for future prices. As EQT CEO David Porges put it, "there is a longer lead time between spuds and marketable production than there used to be' because rigs have become more efficient." Porges nevertheless "consider[s] rig count to be a reasonable, if rough, leading indicator of natural gas production". Because rig counts are still a leading indicator of production, the current resilient supply isn't guaranteed to last and supply growth could be slower than expected as production from existing wells declines.

Mother Nature could also aid natural gas prices. Although no one can predict the weather, it is a safe assumption that the recent period of moderate temperatures isn't guaranteed to last. If the coming summer is warmer than expected, the record inventories will recede and sentiment will improve.

Better times ahead
Because of these conditions, the EIA estimates that Henry Hub spot prices will improve to the $3 per Mcf range in 2017, up from its estimate of $2.25 per thousand cubic feet for 2016. Given the $3 range assumption, Range Resources and EQT are both attractive. Both Range Resources and EQT have substantial assets in the Marcellus and Utica, where production is expected to double from by the end of the decade from present levels, and which experts think might have enough recoverable natural gas to meet U.S. demand for multiple decades. Because the geography is favorable, the wells in the two plays also have average breakevens of below $3 per thousand cubic feet. The research firm Wood Mackenzie estimates that Range has the lowest breakeven in the South West Marcellus of around $2.60/Mcf while EQT states that "given the industry-leading cost structure of our core Marcellus acreage and potentially the Utica, EQT can make excellent returns at mid-$3 gas [when factoring other costs]."

Range Resources and EQT's low production costs and valuable acreage make them ideal natural gas plays in times of uncertainty. The companies' low production costs and financial flexibility allow them to survive until the market improves and their valuable acreage affords them substantial leverage once prices rise. Range Resources and EQT are two companies that will probably make a comeback when natural gas prices increase.