Please ensure Javascript is enabled for purposes of website accessibility
Log In Help Join The Motley Fool
Free Article Join Over 1 Million Premium Members And Get More In-Depth Stock Guidance and Research
By Andrés Cardenal, Jason Hall, and George Budwell – Apr 10, 2016 at 7:18AM

Buying the right stocks is only half of the game -- you also need to know what and when to sell.

At The Motley Fool, we're big fans of buying high-quality companies and sticking with them for the long term. However, you sometimes need to be willing to sell a position when the investment thesis is not playing out as expected, or if the business fundamentals are simply deteriorating.

In that spirit, we asked our contributors to share with our readers which stocks they might consider selling in the middle term, and names such as 3D Systems (DDD -5.23%), Pfizer (PFE -0.91%), and Brookfield Infrastructure Partners L.P. (BIP 0.56%) popped up during the conversation.

Andres Cardenal: 3D Systems stock is up by 165% from its low point in January, but even after this massive gain, the stock is still down by more than 40% over the last 12 months. This shows that 3D Systems is a tremendously volatile stock, and that's not even the worst part. Volatility would not be much of a problem if the business fundamentals were moving in the right direction, but 3D Systems is a fairly uncertain investment at this stage.

The company is one of the leading players in 3D printing, an exciting industry offering potential for innovative disruption. Nevertheless, just because the industry looks promising doesn't guarantee that different companies in the business will be solid propositions for investors, and 3D Systems is just not delivering in accordance to expectations.

Total revenue during 2015 came in at $666 million, a sluggish increase of 2% year over year. Most of the weakness was concentrated in products and materials, with revenues in these segments declining 9% and 5%, respectively. The services division, on the other hand, is doing much better; revenue in this segment grew 22%. Adding to the concerns, 3D Systems is being hurt by declining profitability; gross profit margin fell from 48.6% of revenue in 2014 to 43.8% of sales in 2015.

I still believe 3D Systems offers upside potential over the long term. However, unless the company proves it can capitalize on its growth opportunities in a profitable way, I may need to sell 3D Systems and invest the proceeds in a sounder and more reliable stock.

George Budwell: After its second high-profile M&A flame out, I'm seriously considering kicking Pfizer out of my portfolio. While the market cheered the U.S. Treasury's actions to break up the planned merger between Allergan and Pfizer, I think this whole episode reveals a deeply disturbing aspect about Pfizer's approach toward creating value for shareholders: In short, Pfizer's management seems to be focused far too much on accounting issues -- such as its effective tax rate and outstanding share count -- rather than on growing its top line.

While it's true that some of Pfizer's newer products such as Eliquis, Ibrance, and Prevnar 13 are expected to grow the drugmaker's top line by 4.4% this year, the fact remains that the company hasn't effectively dealt with its headlong dive over the so-called patent cliff. After all, its Global Established Products business reported a 14% decline in total sales in 2015, offsetting a healthy 11% annual sales increase within its Innovative Products segment last year. The net result is that Pfizer's shares have steadily marched lower over the last 12 months: 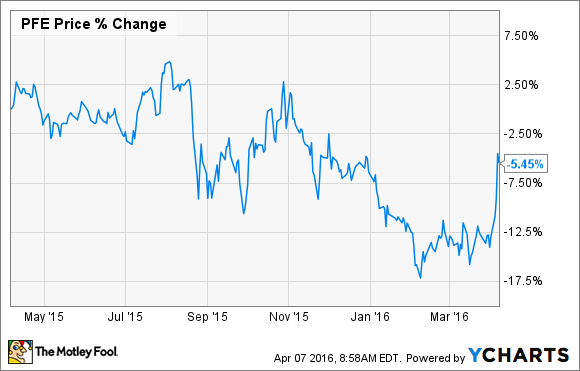 The bottom line is that Pfizer's cohort of newly approved products are being diluted -- from a value creation standpoint -- by the drugmaker's older products that have lost patent protection. The merger with Allergan would have positioned Pfizer for a possible split in, perhaps, 2018 to solve this problem, but management's decision to shutter the merger after the tax benefits evaporated leaves the company in a precarious position going forward.

Basically, Pfizer is wasting, in my opinion, some of the best years of its Innovative Products business because of its burning desire to lower its effective tax rate. In the process, Pfizer is getting left behind by many of its big pharma peers that are already starting to push past the patent cliff. Worse still, management doesn't appear to have a solid plan in place to finally resolve these lingering patent problems, and that's the main reason I may part with my shares in the not-so-distant future.

Jason Hall: This is a tough one for me, but I think in the long run, it's going to be the right decision to sell Brookfield Infrastructure Partners L.P. Why is it tough? Because I love the business, and I think it's likely to beat the market's total returns on average over the long term.

So, why sell a business I love? Because I hold shares in an IRA, and Brookfield Infrastructure Partners is a master limited partnership, or MLP.

Why does that matter? It matters because MLPs don't pay corporate taxes, passing the tax liability down to investors. And unfortunately, that can lead to owing taxes on distributions, even if the shares are held in a retirement account. It's a terribly inefficient investment in a tax-advantaged retirement account.

Today, it's not a problem, since the income I derive from my Brookfield Infrastructure Partners investment is still below the threshold that would cause me to owe tax on it. But it's in my best interest to not build up enough assets like Brookfield in my retirement accounts over time, since they could turn into a problem down the road. In other words, this is purely a tax-planning move.

For that reason, I'm probably going to sell the units I hold in my IRA, though I'm certainly not selling the ones I own in my taxable investing account. To the contrary, this would be one of the first income investments I'd buy in a taxable brokerage account.

Andres Cardenal owns shares of 3D Systems. George Budwell owns shares of Allergan PLC and Pfizer. Jason Hall owns shares of 3D Systems and Brookfield Infrastructure Partners. The Motley Fool recommends 3D Systems and Brookfield Infrastructure Partners. Try any of our Foolish newsletter services free for 30 days. We Fools may not all hold the same opinions, but we all believe that considering a diverse range of insights makes us better investors. The Motley Fool has a disclosure policy.