You don't need to be told that the cost of a college education is rising faster than the rate of inflation or that you'll need a king's ransom to pay for four years of Junior's schooling. But you could use some help finding a stock today that might be worth a royal sum some 18 years down the road.

Three Motley Fool contributors take a look at why Pfizer (NYSE:PFE), A.O. Smith (NYSE:AOS), and Ceridian HCM (NYSE:CDAY) could be the stocks that help pay for Junior's sheepskin. 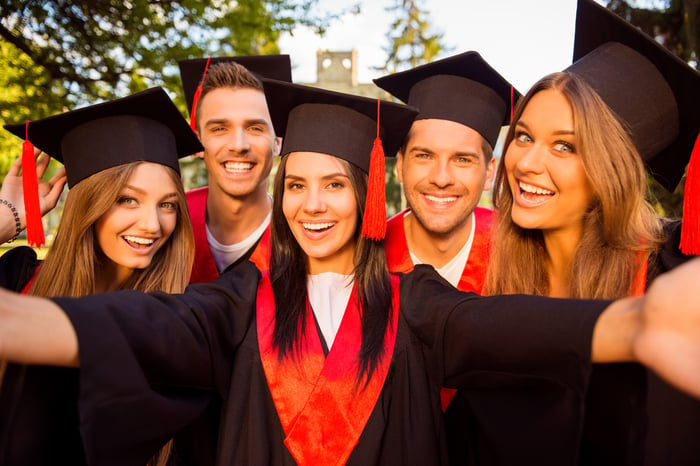 George Budwell (Pfizer): Buying stocks and holding them for long periods of time can be a great way to help cover the enormous costs of sending a child to college. This strategy, though, only works if you buy the right types of stocks that can power higher regardless of market conditions. Pharma behemoth Pfizer fits this profile nicely.

Why is Pfizer a great stock to own for long periods of time? For one, this blue-chip drugmaker has proven its ability to create value for shareholders, even under less-than-ideal conditions.

Over the past few years, for instance, Pfizer has been stung by a host of patent expires for top-selling drugs such as Lipitor, Celebrex, and Viagra -- costing it billions in annual revenue in the process. Nevertheless, the company's shares have still managed to produce a total return on capital of 72% over the last five years (including dividends). That's some of the best returns on capital among large-cap healthcare stocks in general or big pharma stocks in particular in the past five years.

Next up, Pfizer is close to finally pushing beyond the last of its major patent issues. Once the nerve pain medication Lyrica goes off patent in the U.S. at the end of this year, the company will then be free to focus squarely on its high-powered lineup of newer drugs that include the breast cancer medicine Ibrance and the breakout blood thinner Eliquis, among several others. As a result, this titan of the pharma industry should be able to continue delivering top-notch returns on capital for a long time to come.

A high-growth play from a boring industry

Neha Chamaria (A.O. Smith): When you're talking about a stock that could help you fund your child's higher education, you want to find a potential multibagger in the making. Companies with a solid foothold in a promising industry stand a fair chance to be one, which is why I'd recommend you consider A.O. Smith.

Now, A.O. Smith doesn't belong to high-flying sectors like technology, but it's also a fine example of how beautiful boring can sometimes be. As a manufacturer of water heaters and boilers with presence in more than 60 countries, the company is catering to a market that'll likely remain big unless someone invents better ways to heat water or winters become a thing of history. A.O. Smith also recently forayed into the water treatment industry in China.

A.O. Smith's sales and adjusted earnings per share (that is, excluding the impact of nonoperational items such as pension, tax reforms, and restructuring) have growth at compound annual rates of 10% and 25%, respectively, since 2010. Credit largely goes to a judicious mix of acquisitions and growth initiatives in high-potential markets like China and India. These two, in fact, could be the biggest growth markets for A.O. Smith in coming years: Its sales from China alone crossed $1 billion last year, growing at a compound annual rate of 21% in the past decade.

I expect A.O. Smith stock to generate rich returns in the long term for two reasons. First, the company's growth moves to tap global opportunities should consistently add value to its top and bottom lines, which should reflect in its share price. Second, as a Dividend Aristocrat, A.O. Smith has a great dividend history: In October, management raised dividends for the second time this year and now boasts a solid five-year dividend compound annual growth rate of 30%. This combination of potential EPS accretion and dividend growth should work well in favor of A.O. Smith shares in the coming years.

Not your typical day laborer

Rich Duprey (Ceridian HCM): Payroll processing is a necessary function of any business, but its complexities usually result in businesses outsourcing the operation to a third party. It's a burgeoning industry with a diverse array of competitors, from smaller shops like Paycom and Workday to large outfits such as ADP.

Ceridian HCM is new to the public markets, having just IPO'd in April, but its lineage stretches back to the 1950s and Control Data Corp., and more recently (1990s) to information services firm Ceridian. It was the acquisition of Dayforce, a software-as-a-service provider for HR and related activities that ultimately led to the creation of Ceridian HCM.

What separates this HCM business -- HCM stands for human capital management -- from everyone else is its ability to process same-day transactions, a necessary requirement of the on-demand and gig economy. According to some estimates, 40% of the U.S. workforce will work for themselves by 2020. Ceridian's flagship Dayforce cloud platform is adding on-demand pay functionality that will enable employees to request a payout based on their earnings at any time. It's the first of its kind in the industry.

Ceridian has gained more than 70% since its IPO, but there's good reason to think it can go much higher still, as it establishes itself in the forefront of the contingent employee workforce that could reshape the job market as we know it.