Please ensure Javascript is enabled for purposes of website accessibility
Log In Help Join The Motley Fool
Free Article Join Over 1 Million Premium Members And Get More In-Depth Stock Guidance and Research
By Tyler Crowe - Apr 16, 2016 at 9:15AM

ExxonMobil, Union Pacific, and Textainer Group Holdings have the qualities of companies that you will want to buy and hold for a very, very long time.

Despite the different styles that the great investors of our time have used, they've all shared a common theme: Buy stocks and hold them over long time periods. The earnings potential of great companies over time will far outperform one's ability to go in and out of stocks at the right times. To succeed at holding companies over decades, you need to look for those with immensely strong competitive advantages that will stand the test of time. That's why ExxonMobil (XOM 2.01%), Union Pacific (UNP 0.15%), and Textainer Group Holdings (TGH 1.58%) should make for great investments over such a long time frame.

There's still value in oil
Any media related to oil can be a fickle thing. A year ago, $40 for a barrel of oil was considered a death kiss for oil and gas companies. Today, though, that same price is considered the kiss of life that will help the industry get back on its feet. These kinds of back and forth are enough to make one's head spin. Over the next decade, however, we can pretty safely assume that oil and gas will be key components of our energy mix. Companies in the space may come and go, but one that will likely stick around for a while is ExxonMobil, and its track record as a great capital allocator suggests it's a company you could buy and hold for the next decade.

Looking beyond ExxonMobil's size and scale, which allow it immense competitive advantages, one thing that we can reasonably assume with this company is that it will be disciplined when spending its capital. This downturn has shown yet again that, even among its well-capitalized peers, ExxonMobil is still one of the best at generating returns on capital employed. 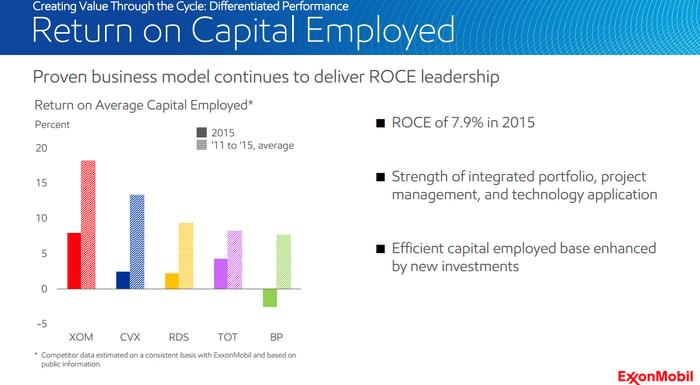 The industry will go through fits and starts, but over time, companies that churn out superior returns on their investments will be the ones that will be successful over the long term. That is why ExxonMobil has stayed on top of the business for decades, and has one of the best chances to remain on top for another decade.

Keep on chugging along
When looking for a company worth buying and holding for a decade or more, a great place to start is in industries that will be very, very hard to disrupt. One of those industries is railroads. Rail is the most economical method for moving large volumes of cargo over land, but it's only economical when a rail company has a massive rail network already built out. Simply getting the property rights to lay new rail is extremely expensive, and it takes billions of dollars a year to build and maintain those rail networks. With one of the largest rail networks in the U.S., Union Pacific is one worth buying and holding indefinitely.

While Union Pacific has to spend billions of dollars every year to keep its infrastructure up and running, those investments have paid off. Over the past decade, the company's operating ratio -- total operating costs divided by total revenue -- has improved by 24 percentage points, which has drastically improved earnings per share and returns. 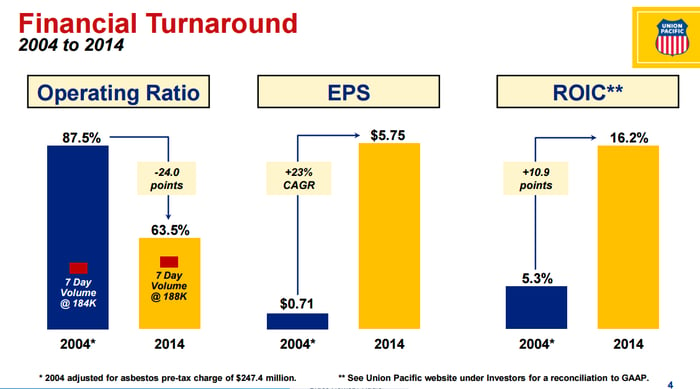 Also, for all the billions that go out the door in investments, an even greater amount of cash comes back. In 2015, the company generated close to $3 billion in operational cash in excess of its capital spending needs, which helped pay for its dividend and share repurchases.

Rail companies have hit a weak period as volumes of coal and agricultural products have been on the decline, but that also gives investors a chance to pick up shares at a 33% discount from their highs back in 2014. As Union Pacific continues to churn out high rates of cash, it looks to be a strong investment for the next decade.

Investing in global growth, one container at a time
One of the things that has allowed rail to flourish in recent years is the expansion of intermodal transport, and intermodal containers have made it largely possible. These containers can be easily transferred between, ships, rail, and truck transport -- making the transport of goods that much more efficient. While it's a pretty commoditized business, it helps to have one of the largest fleets of intermodal containers, and that is what makes Textainer Group so interesting as a long-term buy-and-hold company.

Textainer owns and leases a global fleet of containers that lists all 20 of the world's top shipping companies as its customers, and over the past decade, it has done a very commendable job of utilizing its fleet at a very high rate under long-term contracts, making its revenue streams rather predictable. 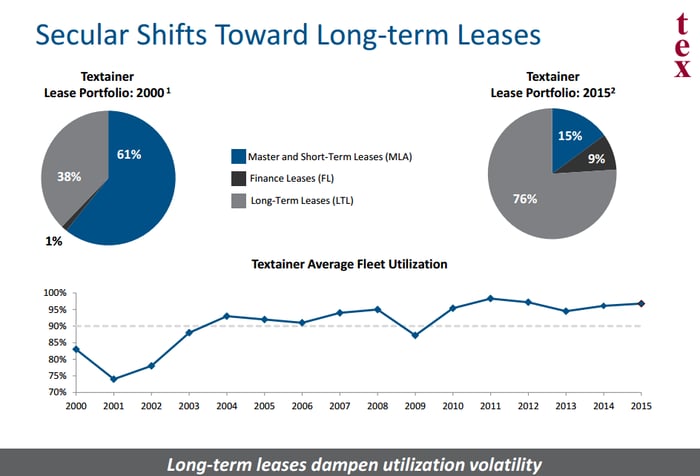 Textainer has struggled recently because of cheap steel prices and a catatonic global economy, which led it to cut its dividend in November of last year. This has resulted in a massive sell-off of shares over the past two years, but there are reasons to be optimistic about Textainer. There is a clear-cut trend toward increased trade and the use of intermodal transport over the coming decades as the world economy becomes more integrated that Textainer will be able to capture, and the company has maintained strong returns on equity. With shares trading so low, there is a very good chance that buying and holding Textainer stock over the long term will pay off handsomely.