All of us who have money invested in the market hope to replicate these famous investors' success. We read their biographies, we try to reverse-engineer the thesis on the stocks they pick, we attempt to channel our inner Buffett (or Price, or Lynch, or Graham) when making investment decisions. Unfortunately, hardly anyone will ever reach those stratospheric levels of investing success.

It might surprise many that those people listed above each employed wildly different investing styles. Price was a growth investor who sought out companies with "fertile fields for growth." Lynch promoted the idea of investing in what you know. Graham insisted on waiting for his imaginary counterparty, Mr. Market, to act irrationally and then buying companies that had become wildly undervalued.

Buffett? Well, we all know his love for buying only the best companies at a reasonable price.

These examples make investing seem so simple. So why, if there is more than one way to skin the stock market, are so many people failing at it? Somehow, the average investor's portfolio looks less like a fertile field of growth and more like a fallow field of manure.

The key lesson to be learned is that it was not their investing style itself that made these market icons so wildly successful, but rather the ability to stick with their chosen style through everything the market threw at them.

There is probably no better example of this than Buffett during the late 1960s. At the time, newly minted money managers who hadn't tasted the bitter times of the Great Depression were bidding up the prices of stocks almost regardless of price. When everyone else was buying and selling stocks as fast as cooking food in one of those newfangled microwave ovens, Buffet's buying slowed to a grinding pace as he sought out a decent price for the companies he wanted to buy.

Instead of breaking his principles and splurging on stocks from time to time, Buffett stuck to the investing style that made him successful, even if it meant missing out on huge opportunities. As he stated in a letter to his partners in 1967:

When the game is no longer being played our way, it is only human to say the approach is all wrong, bound to lead to trouble, etc. I have been scornful of such behavior by others in the past. I have also seen the penalties incurred by those who evaluate conditions as they were -- not as they are. Essentially I am out of step with present conditions. On one point, however, I am clear. I will not abandon a previous approach whose logic I understand even though it may mean forgoing large, and apparently easy, profits to embrace an approach which I don't fully understand, have not practiced successfully and which, possibly, could lead to substantial permanent loss of capital.

Show of hands, how many of you have held to your investing principles, regardless of the market conditions, knowing full well you could be missing out on huge gains?

Based on this chart I'm stealing from the Fool's Morgan Housel, chances are that your hand is still down: 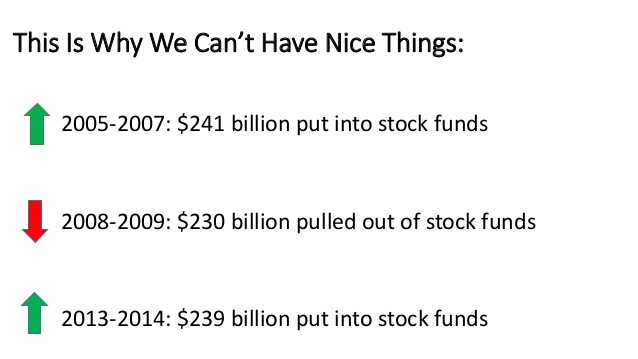 Either investors are not sticking to their investing style, or they simply don't have a style at all other than following the whims of the fanatical Mr. Market.

I can't say with any conviction that one of the investing styles cited above is better than the others; nor am I certain that these people could have employed another's investing style with the same success. (Although I bet that investing in companies with smaller market caps and long runways, like Lynch did, would have made Graham nauseous).

What was important was that these investing styles fit how these people were wired emotionally and intellectually, and that each found the one that fit them best and held a steadfast commitment to it. In the process, they made more money than you or I can ever hope to see.

So go ahead and pick an investing style. Maybe you are the venture capital-type growth investor who is willing to put your money on the reputation of smaller companies with the hope that a few great wins will make up for a few losses. Or maybe you love to get down and dirty with value and will look for out-of-favor companies at bargain-basement prices. Based on the performance of the average investor, you can do better than most if your style is simply investing in the S&P 500 at regular intervals.

Whatever investing style you land on, though, stick with it.