Please ensure Javascript is enabled for purposes of website accessibility
Log In Help Join The Motley Fool
Free Article Join Over 1 Million Premium Members And Get More In-Depth Stock Guidance and Research
By Adam Galas - Apr 21, 2016 at 10:10AM

Recently rising crude prices sent frack-sand stocks soaring. Here are three reasons this situation may end up being a short-term reprieve and why the rest of the year may be far less rosy.

Since bottoming out at $26 per barrel in February, oil rallied 54% to above $40. This situation has greatly benefited investors in America's four largest frack-sand producers: Fairmount Santrol (NYSE: FMSA), US Silica Holdings (SLCA -1.58%), Hi-Crush Partners (HCRS.Q), and Emerge Energy Services (NYSE: EMES), all of whose share prices have been chucked into a wood chipper over the past year. 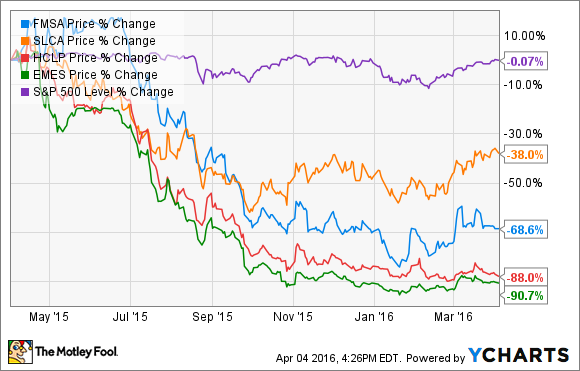 However, there are three reasons investors shouldn't expect the recent rally to continue. Yet one of these stocks remains the best positioned to massively profit from the impossible-to-predict yet inevitable oil recovery.

While all frack-sand producers suffered in 2015, the extent of the financial damage was far from equal. For example, Hi-Crush Partners managed to increase its market share the most last year. Thanks in part to its extremely strong transportation network, Hi-Crush was able to deliver sand directly to oil producers rather than have its customers pick it up at its Wisconsin facilities (in basin delivery).

Meanwhile Emerge Energy was able to maintain the best overall pricing power because it put its large number of idle rail cars to use to nearly double the proportion of tonnage delivered in basin, (which allows sand producers to secure higher prices) from 23% to 42%.

Fairmount Santrol, on the other hand, faces the worst declines in price per ton, and thus the steepest drop in profitability. That's because much of its business is in more expensive resin-coated frack sand. With oil and gas producers desperate to cut costs as much as possible, its more specialized sand simply couldn't maintain its premium price in the face of cheaper competition.

The thing that frack-sand investors need to remember, though, is that 2016 is shaping up to be an even worse year for each of these stocks. That's because in the fourth quarter of 2015 the average price per ton sold fell to new lows, indicating that 2016's average may end up even lower. For example, Hi-Crush's Q4 average price per ton sold was $52, compared with its 2015 average of $62.

In addition, Fairmount, Hi-Crush, and Emerge face a bigger threat than simply continued margin deterioration that could potentially threaten their ability to survive the worst oil crash in over half a century.

Not only is US Silica's balance sheet by far the strongest, but its large cash position also allows it to wait out the oil crash and potentially even profit from it. That's because US Silica recently announced that it's taking advantage of its far stronger share price to sell an additional 8.7 million to 10 million shares at $20 each. While this might result in as much as 16% shareholder dilution, it could also bring in as much as $200 million in gross proceeds, which would raise US Silica's cash position to almost $500 million.

This situation should greatly increase US Silica's financial flexibility as the industry waits for energy prices to recover. For example, while US Silica could use that cash to pay down its debt, the company might use its cash to acquire more distressed competitors.

That would raise US Silica's market share from an industry best 20% to 30% and set it to come out of the downturn stronger than better poised for long-term growth. 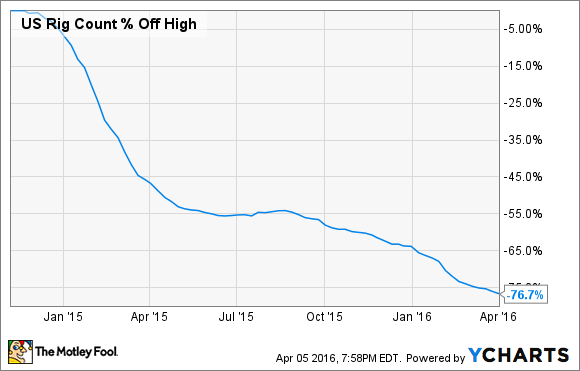 Frack-sand investors need to realize that the recent sharp recovery in crude prices was largely due to speculators' hopes that an agreement to freeze oil production at current levels would alleviate the massive global surplus of oil. But that thesis may not last.

After all, Iran says it's committed to increasing production by over 1 million barrels per day and has called the freeze agreement "ridiculous." Meanwhile, Russia continues to increase production, and Saudi Arabia has said that without Iran and Russia's complying with the freeze, it won't go along with the deal.

Bottom line
With oil the oil markets still going through fits and starts as the global oil glut begins to clear, investors need to realize that frack-sand producers such as Fairmount Santrol, US Silica, Hi-Crush Partners, and Emerge Energy are in a potentially precarious position.

Only US Silica has a strong and strengthening balance sheet, while the others remain highly leveraged and at the mercy of their creditors, which makes the best long-term frack-sand investments.