VW took a massive one-time charge for costs related to its diesel-emissions cheating scandal. That charge more than offset the profit from what was otherwise a decent year for the German auto giant. 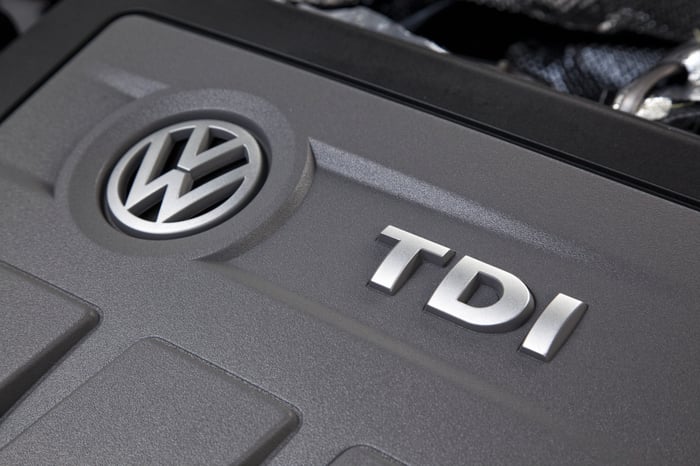 The costs of the diesel-emissions cheating scandal blew away VW's 2015 profit, and then some. Image source: Volkswagen

The German auto giant released a preliminary report of its full-year 2015 earnings on Friday, April 22. CEO Matthias Mueller had delayed the report in order to give the company more time to calculate the likely costs of the scandal.

About that diesel-powered elephant in VW's living room
The big news in VW's report was that charge it took to cover some or all of the costs of the diesel scandal -- $18.3 billion might seem excessive, but it's possible that it won't be enough.

We know where the majority of that sum will probably be spent. Late on April 21, VW announced that it had come to an "agreement in principle" with the U.S. Department of Justice, the Environmental Protection Agency (EPA), the California Air Resources Board (CARB), and the Federal Trade Commission (FTC), as well as with attorneys representing U.S. owners of diesel-powered VW and Audi vehicles that included software that allowed the cars to emit much more pollution than allowed under U.S. law.

Details of the agreement won't be released until June. But it's known that VW has agreed to offer to buy back about 480,000 vehicles, to pay a premium to affected owners, and to create an "environmental remediation fund" to help offset the costs of the added pollution emitted by the cars since 2009.

The total cost of the settlement could exceed $10 billion. But VW will likely face other penalties and costs outside of the United States, as well as potential criminal charges: An ongoing criminal investigation by the U.S. government was explicitly not settled in Thursday's agreement.

Still, by taking the charge against 2015 earnings, VW has already begun the process of putting the episode in the past. And aside from the diesel-powered elephant in VW's living room, the company had a decent year in 2015.

As for the rest of VW's business in 2015...
VW's net liquidity -- its total of cash on hand and available credit lines -- rose to 24.5 billion euros at the end of 2015. Part of that is due to the added credit lines that Mueller set up last year after the costs of the scandal started to become apparent. But 2.8 billion euros came from the sale of VW's shares in Suzuki.

On the operating front, VW was able to post an increase in revenue despite a small year-over-year drop in its global deliveries. The sales drop was largely due to weakness in China's market for smaller cars, VW said, while the revenue increase was helped by exchange-rate swings that favored the euro.

The preliminary report that VW released on April 22 didn't detail its results by region and by brand. We'll have that information when VW releases its full 2015 annual report later in April.

What Volkswagen said about its 2015 earnings
"The Volkswagen Group's operations are in great shape, as the figures before special items for the past fiscal year clearly show," Mueller said in a statement. "Were it not for the sizable provisions we made for all repercussions of the emissions issue that are now quantifiable, we would be reporting on yet another successful year overall. The current crisis – as the figures presented today also reveal – is having a huge impact on Volkswagen's financial position. Yet we have the firm intention and the means to handle the difficult situation we are in using our own resources."

Looking ahead: Volkswagen's 2016 guidance
VW gave cautious guidance for 2016. It expects deliveries to be roughly equal with 2015 results, but revenue may be down as much as 5% due to weakness in South America and Russia, exchange-rate swings, and potential further costs related to what VW calls "the emissions issue." VW expects its full-year operating profit margin to come in between 5% and 6% in 2016.

"This year we are again operating in an exceedingly challenging environment in which global demand for new vehicles is declining, exchange rates and interest rates remain highly volatile and competition in many of our markets is intensifying. Added to this is the emissions issue, the extensive clarification of which will also be a dominant feature of the Volkswagen Group's work in the current year," CFO Frank Witter said in a statement. "Regardless of this, we are confident that the Volkswagen Group will make good progress on its chosen path."