GM posted a great first quarter, but here are some details that shouldn't be overlooked.

Let's get something out of the way quickly: General Motors (GM -1.99%) had an excellent first quarter. Nay, General Motors had a record first quarter. Its first-quarter net income more than doubled to $2 billion, or $1.24 per share, and excluding one-time expenses, earnings checked in at $1.26 per share, which was far ahead of $1.00 analyst estimates.

Revenue rose 4.5% during the quarter, to $37.3 billion, despite global deliveries declining 2.5%. GM's EBIT-adjusted margin moved 130 basis points higher, to 7.1%, and its return on invested capital (ROIC) jumped 9 percentage points to 28.5%.

Those are stats you'll see repeated ad nauseam, but here are some details you likely won't hear. Let's look at why GM's cash flow is being sucked into oblivion, figure out what the heck happened to GMNA's margins, and highlight the solid progress in GM Financial.

It's all about the cash flow
Within about 10 seconds of glancing at GM's press release, the first thought than ran through my mind was: "What is happening to GM's cash flow?" The answer became partially apparent 23 slides into GM's first-quarter presentation slide deck; see for yourself. 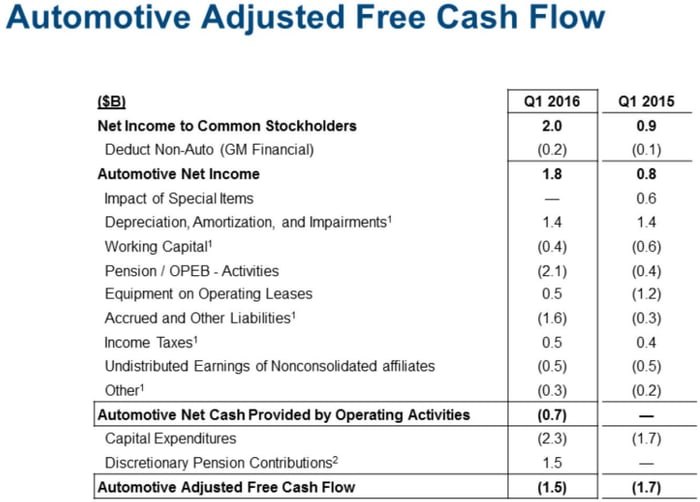 Despite net income doubling compared to the prior year's quarter, and automotive net income checking in at $1.8 billion compared to $0.8 billion last year, it's easy to see that GM's Pension / OPEB -- Activities and Accrued and Other Liabilities are large culprits. The story here, in my opinion, is really in two lines: Capital Expenditures and Discretionary Pension Contributions.

In recent years, GM has made hardly any discretionary pension contributions, but that strategy has changed course. At a time when GM's credit rating is improving and financing remains cheap, the automaker said earlier this year it would issue $2 billion in new debt to help shore up its pension plan for U.S. hourly workers.

Beyond the pension contribution, it's clear GM is spending a lot more on capital expenditures. That's likely because of the elevated number of vehicle refreshes and launches, costs that can be volatile quarter to quarter, and year to year.

Why the GMNA margin decline?
A person couldn't be blamed for assuming GM's margin in North America would have moved higher during the first quarter, especially considering net income more than doubled and EBIT-adjusted margins rose 130 basis points to 7.1%. After all, GMNA drives the majority of profits for the automaker, and its EBIT-adjusted of $2.3 billion was a Q1 record.

With all of that said, how is it that GMNA's EBIT-adjusted margin percentage checked in at its lowest level since the fourth quarter of 2014, at 8.7%? Why did it decline to 8.7% after three consecutive quarters above 10%, and an extremely impressive 11.8% during the third quarter of last year?

The answer is simple, but often forgotten. GM, along with the rest of the Detroit automakers, had to deal with big changes and charges related to the new UAW contract. Without that charge taking place during the first quarter, GM's North America margin would have been about 9.5%. That, and GM notes that it's still on track to generate 10% margins in North America for the full year.

GMF remains a catalyst
Many investors overlook the fact that GM Financial is one factor that can improve the automaker's top and bottom lines without selling any additional vehicles. That's because GMF's operations are still expanding rapidly and remain years behind that of Ford Credit, its cross-town rival's finance division, leaving plenty of upside. GM anticipates GMF will more than double its EBIT-adjusted contributions from last year by the end of 2018.

That expansion helped drive GMF's revenue during the quarter to $2.1 billion, from $1.4 billion a year ago. However, GMF remains a work in progress on the bottom line, which is to be expected over the near term, as its EBT-adjusted moved only slightly higher, from $214 million to $225 million, during the first quarter -- which is still a record first quarter GMF result.

Beyond GM's solid first-quarter and rising profits, the company's cash flow isn't as bad as it appears, nor is its GMNA margin, and further upside with GMF is setting the automaker up for a very strong full year of results.