Fortunately the adjustment to medium-term 2017 guidance was widely expected.

Celgene (CELG) reported solid first-quarter earnings on Thursday, raised the low end of its 2016 guidance, and made a widely anticipated pullback to its 2017 guidance.

Of Celgene's four drugs, Otezla is the most important for the biotech's long-term future. Pomalyst sold $274 million in the first quarter while Otezla sales came in at $196 million, but management is guiding for "greater than $1.0 billion" in revenue from both drugs this year. Pomalyst is already on pace to reach that goal while Otezla has to grow 17% quarter over quarter to reach blockbuster status. For reference, sales increased just 7% quarter over quarter in the first quarter.

Fortunately the company continues to see an upward trend in U.S. market share, with Otezla capturing 38% of psoriasis patients switching brands or starting therapy and 42% of psoriatic arthritis (PsA) patients switching or starting therapy. But even after capturing a large percentage of new-to-brand patients, Celgene only has a fraction of the overall market for both diseases, leaving plenty of opportunity left. In the psoriasis market, Otezla passed Amgen's (AMGN 0.73%) Enbrel last year and has its sights set on catching Johnson & Johnson's (JNJ 0.28%) Stelara. 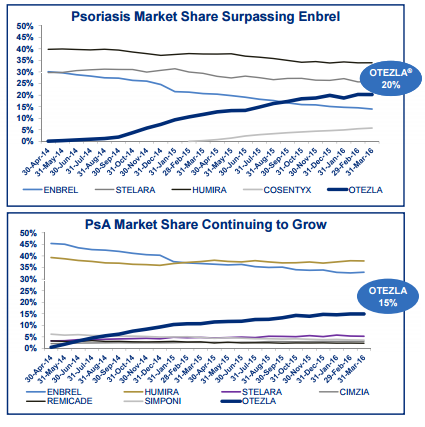 The bigger near-term growth opportunity for Otezla comes from Europe and Canada, where the drug was launched after the U.S. Otezla sales outside the U.S. amounted to just $21 million in the first quarter, compared to $175 million in the U.S., but that ratio should change with the drug now being reimbursed in 14 European countries.

Looking forward
With a solid quarter under its belt, management increased the low end of its sales guidance from $10.5 billion to $10.75 billion while leaving the top end of the range intact at $11 billion. It did the same for adjusted earnings, which are now expected to fall in the range of $5.60 to $5.70 per share, up $0.10 on the low end. At the midpoint of the ranges, revenue and adjusted earnings per share would be up 19% and 20%, respectively.

Importantly, management left 2020 guidance intact, hinting that the guidance was conservative even with the stronger dollar hurting overseas sales when they're converted to dollars.