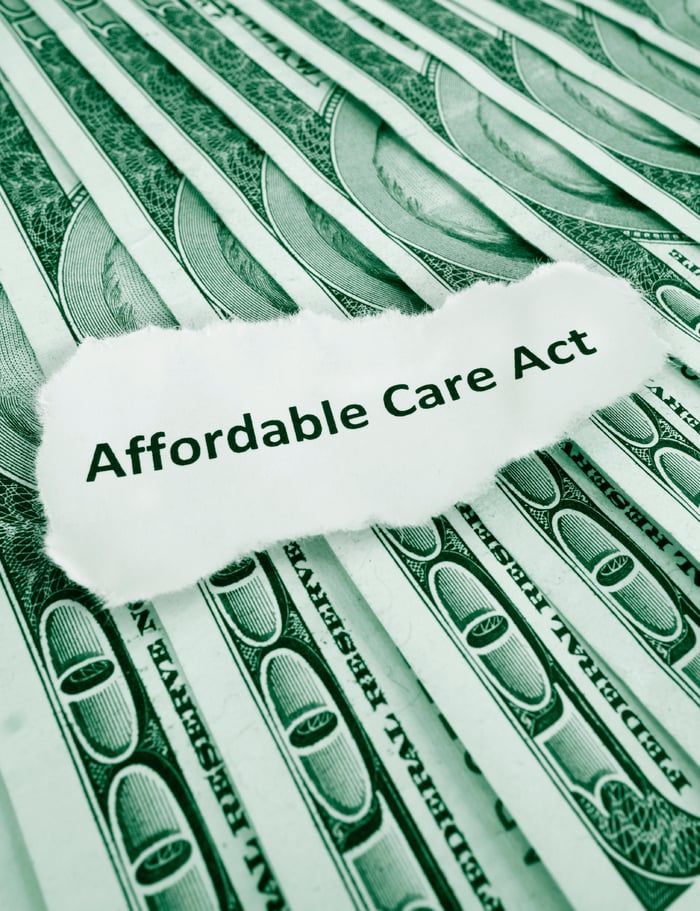 The Patient Protection and Affordable Care Act (also known by the shorthand "Obamacare") was passed in 2010 with two primary goals: Reduce the rate of uninsured Americans, and cut healthcare costs. Despite a number of setbacks -- most recently UnitedHealth Group's recent announcement that it is exiting most of the Obamacare public exchanges because its footprint there was unprofitable -- the law is largely succeeding in its first goal. At the end of 2015, the uninsured rate in the U.S. was 11.9% according to a Gallup/Healthways survey -- a far cry from the 18% uninsured rate in 2013 before many of the law's provisions had taken effect.

The second goal has been more difficult to achieve, and UnitedHealth Group's exit will only make it more so. After all, the law depends on competition among insurers to help keep prices down... and one fewer insurer means less competitive markets. And as it is, premiums across the exchanges increased 8% this year and may increase by even more next year.

Yet one portion of the law, Medicaid expansion, whereby millions of poor Americans who could not otherwise afford health insurance are enrolled in Medicaid, is having a surprising impact on low-income families across the United States. According to a new study (link opens PDF) by a team from the Federal Reserve Bank of Chicago and two universities, Medicaid expansion is helping poor Americans reduce their non-medical debt by between $600 and $1,000.

Connecting the dots
First off, it's important to know that -- unlike many of the plans offered on the Obamacare exchanges -- enrollees in Medicaid usually pay little to nothing for healthcare. That's crucial because medical bills are a big financial stressor for many Americans, and that goes double for the uninsured (particularly the uninsured poor). According to one study, uninsured Americans who are hospitalized watch their likelihood of sliding into bankruptcy double over the four years after that hospitalization and also see a 170% increase in unpaid medical bills.

If this study were targeting medical debt, nothing I've written yet would be surprising. After all, you get insurance, you don't have to pay a five-figure hospital bill, you don't have medical debt anymore. No surprises there. But the team specifically targeted non-medical debt to see what would happen when the financial stressor of medical debt was removed. And it turns out that the impoverished Americans who benefited from Medicaid appear to have taken that money and reduced their other debt, sometimes by as much as $1,000.

And the debt reduction could be even higher
The study looked at the change in collections balances for those zip codes in the United States that are disproportionately poor and located in states that expanded Medicaid. Then the research team honed in on the percentage of the population that likely obtained Medicaid insurance where they previously didn't have access and found the estimated $600 to $1,000 reduction in collections balances. There are two reasons that number could be conservative:

1. The study didn't consider medical debt (although, as the authors noted, it's possible that some may have been included -- debt can be difficult to classify). As I noted above, it wouldn't be surprising if medical debt balances also decreased substantially in this population.

2. The researchers also considered another possible way of measuring the affected population by zeroing in on the percentage of uninsured folks newly eligible for Medicaid who were likely to actually have a hospitalization. After all, if -- as data from the National Health Interview Survey indicate -- only 22% of adults newly eligible for Medicaid were likely to experience a hospitalization during that time, then those folks would be the ones actually seeing the financial benefit from Medicaid (and therefore reducing their collections balances). Rescaling the zip code-level data to that subset of the population yielded an estimated collections reduction of $1,364 to $2,272. Talk about a big chunk of change.

It's a start
With the average American carrying over $20,000 in non-mortgage debt, any debt reduction is good news. That goes double for the impoverished Americans on Medicaid. (Even with Medicaid expansion, a family of four can only earn up to $33,465 to be eligible.) While Obamacare has had plenty of unexpected side effects, this is one hopefully most Americans can rally around.

You'll Never Guess the Surprising Way Obamacare Is Helping Millions of Americans (Hint: It Has Nothing to Do With Their Health) @themotleyfool #stocks Next Article
Current