Please ensure Javascript is enabled for purposes of website accessibility
Log In Help Join The Motley Fool
Free Article Join Over 1 Million Premium Members And Get More In-Depth Stock Guidance and Research
By John Rosevear - May 2, 2016 at 4:05PM

Ferrari is a solidly profitable company and one of the world's greatest brands. But it's not a growth company, and that has frustrated its investors. Can its new CEO deliver more growth without compromising Ferrari's exclusivity?

Marchionne, of course, is also the CEO of Fiat Chrysler Automobiles (FCAU), which owned 90% of Ferrari until it was spun off in an initial public offering orchestrated by Marchionne last year.

But Ferrari's stock has struggled since that IPO. Can Marchionne deliver the growth that the company's new investors seek?

Ferrari announces the retirement of its Chief Executive Officer, Mr. Amedeo Felisa, after 26 years of dedicated service. Mr. Sergio Marchionne will assume those responsibilities while retaining his current role as Chairman of the Company. Mr. Felisa will continue to serve on the Board of Directors of Ferrari with a specific mandate as technical advisor to the Company.

Marchionne had this to say:

I have known Amedeo for more than a decade and I have had the opportunity to work with him closely for the last two years. He is beyond any doubt one of the best automotive engineers in the world. During the last 26 years, he has worked tirelessly to fuel and guide Ferrari's technical development, producing an array of cars which have set the standard for both performance and styling.

The Board of Directors wants to officially express its gratitude to Amedeo for his contributions and is delighted to be able to count on his services as technical advisor to the leadership team going forward.

These executive changes are effective immediately.

What it means for Ferrari: It means that Marchionne is now in position to execute his aggressive vision for the Ferrari brand, one that he hopes will supply at least some of the growth that Ferrari's new investors seek.

Ferrari is in something of an awkward position as a public company. While its investors naturally seek growth, Ferrari limits its own sales and production in order to preserve exclusivity. That strategy works: Ferrari's profit margins are consistently very strong (at least by automaking standards), and global demand for the iconic Italian sports cars remains high. But it means that Ferrari can't just boost sales to drive the bottom-line growth that investors seek.

As Ferrari's new investors have come to terms with that reality, the stock has struggled. Ferrari shares fell over 10% after the company said on Feb. 2 that its shipments would likely grow just 3.3% in 2016. They have recovered somewhat since, but Ferrari shares still trade well below the company's IPO price. 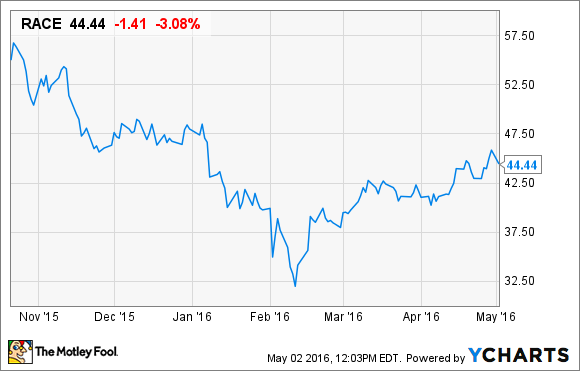 How will Marchionne give shareholders some growth while preserving Ferrari's exclusivity? First, he plans to gradually increase Ferrari's production from the 7,664 cars it shipped in 2015 to about 9,000 in 2019. Second, he will seek to apply Ferrari's brand more broadly to luxury goods beyond cars (or put another way, to aggressively expand Ferrari's merchandising to luxury categories beyond cars).

Will Marchionne be able to generate real growth at Ferrari?
How much growth will all of this generate? It's hard to say. Like a lot of other automakers, Ferrari is to a large extent looking to China for growth, and China's new-car market has been sluggish for the last year. But Marchionne's plan looks to preserve what's important -- the exclusivity of Ferrari's cars -- while expanding the brand. If he can accomplish that without diluting the Ferrari brand, investors may have reason for optimism.