Please ensure Javascript is enabled for purposes of website accessibility
Log In Help Join The Motley Fool
Free Article Join Over 1 Million Premium Members And Get More In-Depth Stock Guidance and Research
By Sean Williams - May 4, 2016 at 9:20AM 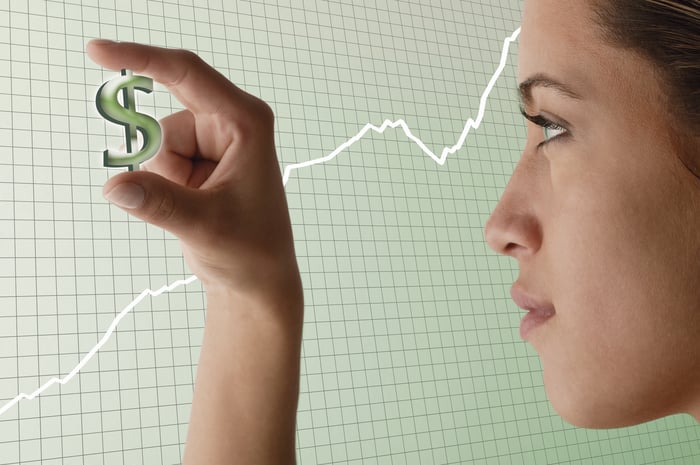 Apple
Bigger isn't always better; but when it comes to free cash generation there's simply no company that can even come close to technology juggernaut Apple (AAPL 1.62%).

Apple's second-quarter earnings results, released a little more than a week ago, didn't exactly hit the mark with Wall Street or investors. Apple's $50.6 billion in sales, a 13% decline from the prior-year quarter, and its $1.90 in adjusted EPS, an 18% decline, both missed the consensus estimate. More important, it marked the first drop in iPhone sales ever from the prior-year period, and it resulted in Apple's first year-over-year revenue drop in 51 quarters. As I said, investors weren't pleased.

But if you take a step back, a lot of the huffing and puffing from shareholders who've become almost spoiled with Apple's unworldly growth doesn't make sense. Apple still has superior customer loyalty and brand recognition within the U.S. and is presumably expected to grow its brand in China as middle- and upper-class consumers look to smartphones as a form of luxury. Apple has a multi-decade growth opportunity to expand its smartphone presence around the globe as data networks are upgraded and both consumer and enterprise demands for data grow. Fundamentally, there's nothing wrong with Apple's iPhone brand or growth strategy.

We're also seeing Apple transition into a platforms company. Instead of relying solely on the devices that allowed it to become great, Apple is working on building an umbrella for its customer base that includes Apple Pay, Apple Music, the Apple Watch, and even an iCar, which it's believed will make its debut toward the end of the decade. Put simply, this means Apple has multiple avenues with which to monetize its customer base and respective enterprises.

And of course we have Apple's roughly $230 billion cash hoard that keeps growing on a quarterly basis. Apple recently announced that it was upping its shareholder returns by $50 billion (that's with a "b") to $250 billion, which it anticipates completing by March 2018. Roughly $175 billion of this $250 billion is expected to be in the form of share repurchases. The company also announced a 10% increase in its dividend to $0.57 in Q2, pushing its yield to 2.4%.

With growth slowing a bit, at least temporarily, a beefed-up dividend could be just the answer to buoy Apple's share price in the coming years -- and it certainly has the cash to do it.

Webster Financial
Since we're talking attractive dividend stocks, you just sort of knew a financial institution of some form would find its way onto the list. This week I'd suggest your attention go to Northeastern regional bank Webster Financial (WBS 1.23%), which operates 180 branches and nearly twice as many ATMs.

Like most banks, Webster's biggest drawback is the persistent low-yield environment precipitated by an accommodative Federal Reserve. Webster's loan portfolio and other interest-bearing assets would benefit in a big way if lending rates even rose by 1% from where they are now. However, the Fed's cautious stance on U.S. economic growth has constrained net interest margin for many banks, forcing them to look to acquisitions and/or cost-cutting to boost their top and bottom lines.

But Webster Financial has specific attributes that could make it an attractive buy for income-seeking investors.

For starters, how about the simple fact that the basic building blocks of banking, loans and deposits, are both steadily growing for Webster. In the first quarter, Webster recorded $1.6 billion loan growth, an 11% increase from the prior year, and nearly 7% deposit growth. Best of all, loan growth came from all four operating segments and was especially strong in commercial loans and residential mortgage from the year-ago period. You'll also be pleased to note that just because Webster's total loans increase, its asset quality hasn't decreased. Total nonperforming loans fell 18 basis points to 0.89% from Q1 2015.

Webster's HSA Bank, which specializes in Health Saving Accounts for Americans looking to save for their future medical costs, could also be another impressive source of growth over the long run. As medical costs increase, Americans could turn to HSA's at growing rate considering that they offer tax advantages and allow the accountholder incredibly flexibility for eligible medical care. The vast majority of Webster's organic deposit growth derives from its HSA Bank, and once lending rates do begin to normalize in the coming years, this could provide quite the boon to Webster's bottom line.

Having recently raised its quarterly dividend by 9% to $0.25, I'd suggest that a doubling of its payout could be possible over the next decade or less. In the meantime, it's paying out a not-too-shabby 2.7%.

FLIR Systems
Lastly, we'll end the week by improving our awareness of FLIR Systems (FLIR), a company that primarily designs and markets sensor systems for surveillance, security, and detection.

The current downsides for a company like FLIR are twofold. First, FLIR's instrumentation segment that provides thermal instrumentation to detect oil and gas leaks, among other functions, has been slowed by commodity prices weakness. In fact, of FLIR's five broken-out segments, instrumentation was the only one to report a year-over-year revenue decline in Q1. The other issue is FLIR is reliant on U.S. government contracts, which can mean its orders, at times, are lumpy.

In spite of these two concerns, FLIR Systems offers income investors clear long-term advantages that they'd be wise to pay attention to.

To begin with, FLIR operates in a relatively niche space. Yes, its orders can be lumpy at times, but it doesn't have a lot of competition for the wide swath of market segments that it's attempting to hit with its thermal imaging and surveillance technology. This should translate into meaningful pricing power for FLIR that it can use to modestly boost its top line and deliver somewhat consistent growth. Not to mention, the thermal imaging market is expected to grow at nearly 7% per year for the remainder of the decade, so industry growth trends are also on its side.

We're also witnessing FLIR Systems be pretty active on the acquisition front. Late last year, FLIR announced the acquisition of DVTEL for $92 million in cash. The move to acquire DVTEL allows FLIR to combine its thermal imaging technology with DVTEL's video management software and video analytics to create a superior security segment product. Acquisitions provide a quick avenue for FLIR to expand its marketable audience, and the roughly $420 million it's sporting in net cash should give FLIR the liberties to nab a good deal when it sees one.

If the U.S. government remains a key customer moving forward and modestly grows FLIR's backlog, then its annual payout of $0.48 (1.6% yield) could likely double within a decade or less.