Please ensure Javascript is enabled for purposes of website accessibility
Log In Help Join The Motley Fool
Free Article Join Over 1 Million Premium Members And Get More In-Depth Stock Guidance and Research
By Evan Niu, CFA - May 5, 2016 at 1:51PM

Debt might be cheaper theoretically, but equity is the way to go.

Electric-auto maker Tesla Motors (TSLA 1.24%) is now paving the way and setting investor expectations that it will likely need more capital in the near future. CEO Elon Musk is justifying the possibility to investors by pointing to blockbuster Model 3 demand, and the decision to aggressively accelerate the production plans for the forthcoming $35,000 electric vehicle.

If Tesla hopes to produce 500,000 cars in 2018, just two years away, it's going to need quite a bit of cash to fund that expansion. That includes not only manufacturing and tooling equipment, but customer support infrastructure (sales, service, and charging). Having an extra billion or two in the bank would go a long way. Under the prior plan to hit 500,000 by 2020, Tesla had felt confident that it would not need to raise external capital. But things have changed.

While Tesla has now garnered about $400 million in customer reservation deposits for Model 3, the company does not want to rely on that as a funding source. They are refundable, after all, even if they technically count as working capital for the time being. Note that most of these deposits were not included in the balance sheet data released yesterday since the quarter closed on the same day as the Model 3 unveiling and standard payment processing times pushed receipt into April.

But from a corporate finance perspective, Tesla now must choose whether it wants to raise equity capital or debt capital. As a shareholder, I'd vote for equity capital.

But at what cost?
Equity capital and debt capital come with very different types of associated with costs. Equity capital is generally more expensive than debt capital, since equity investors take on a lot more risk than credit investors. Shareholders are also farther back in line in the event that a company comes under financial distress.

The cost of debt is a lot more straightforward: It's simply the interest that the company pays on its paper. Most debt instruments (other than zero coupon bonds) will have a specified coupon payment that is paid to credit investors. While debt is cheaper, it's more of an explicit cost.

All of this gets even more complicated if we consider convertible notes, though, which are bonds that can be converted into shares. Tesla does have convertible bonds outstanding in its capital structure, but the cost of those is a topic for another day.

Enough is enough
I think that Tesla's current debt load is already quite meaningful ($3.1 billion in long-term debt and capital leases), so adding more debt to the equation adds more explicit financial pressure to Tesla's results, even if it's theoretically cheaper than equity capital.

Tesla has paid over $130 million in net interest expense over the past four quarters related to this debt. 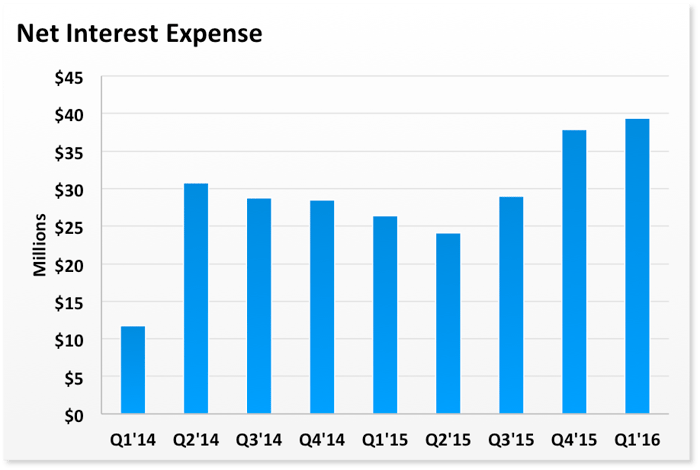 Normally, I'd look at interest expense as a percentage of operating income, but Tesla operates in the red, so that comparison isn't meaningful. Interest expense fluctuates between 2% and 4% of GAAP revenue. Tesla already pays enough interest expense, an explicit cost, while it could more easily issue more equity, an implicit cost.

With shares still fetching a lofty premium in the market, dilution (the cost to existing shareholders) would be rather minimal. It will be up to new CFO Jason Wheeler to make the call, but I hope he agrees.