As if there wasn't enough pressure already, CEO Elon Musk just raised the stakes even further.

There's been no shortage of skepticism about Tesla's (NASDAQ:TSLA) ability to ramp vehicle production to 500,000 vehicles annually by 2020. That's just four years away. Back in its NUMMI days, Tesla's Fremont factory was churning out about that many cars per year, after all. But ramping mass production of vehicles, each of which contains several thousand unique parts, is one of the most challenging endeavors known to man.

The mother of all ramps
The 500,000 annual production target has now been aggressively pulled in by two years. Musk hinted at this possibility on social media, telling his followers that massive Model 3 demand was making Tesla reconsider its production plans. At the same time, Tesla must be strategic with how it ramps because it is approaching the important threshold of 200,000 U.S. deliveries -- when the $7,500 federal tax incentive for EVs will begin to phase out.

Here's how crazy the new ramp looks compared to the original plan: 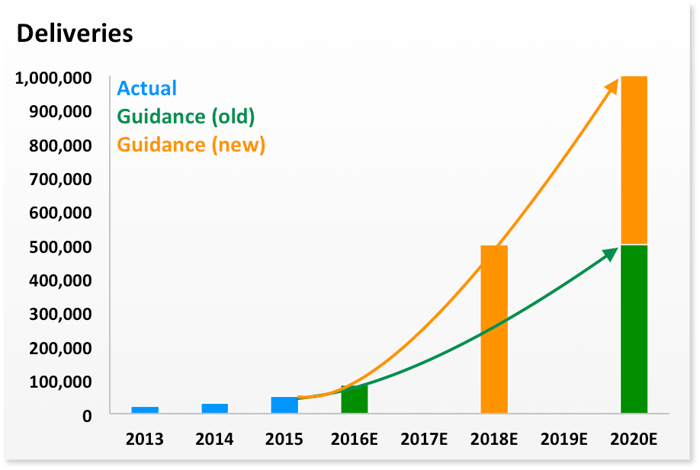 And you thought the skeptics were loud before.

Tax planning
Tesla is widely expected to hit the 200,000 U.S. unit mark in early 2018. But the phase out period lasts four to five quarters, during which time the incentive is not volume limited. It slowly declines from 100% to 50% to 25% in the following quarters. So if Tesla is able to significantly ramp production as it hopes and maximize deliveries within that window, it can maximize the number of customers that receive full or partial credit.

Going to such extraordinary lengths certainly benefits Tesla in the form of increased sales, as well as increased order conversion rates since that credit will help support demand, but it also benefits consumers because they're the ones that receive the tax credit. Tesla will earn quite a bit of consumer goodwill.

Sooner rather than later
There's another important consideration for investors. Model 3 and the expected unit volumes are the foundation of Tesla's lofty valuation. Without Model 3, Tesla isn't worth its market cap of over $30 billion. For context, that's three times the market cap of traditional automaker Fiat-Chrysler, which is worth about $10 billion right now.

This accelerated ramp, if Tesla achieves it, also means that Tesla may be able to live up to its premium valuation sooner rather than later, but it will be no easy task.

Will it be different this time?
Musk is infamous for his track record of overpromising on important operational deadlines and milestones. On numerous occasions at his different companies throughout his career, he has been overly ambitious with timelines. It's for this reason why investors are generally skeptical about any time frame that he promises.

Here's the thing: Musk is keenly aware of his bad habit. Even at the Model 3 unveiling, he self-consciously laughed at his assertion that Model 3 will launch in 2017, hedging his statement by walking it back to a "fairly confident." Musk knows how he is perceived -- yet he still went ahead and dramatically accelerated Tesla's production plans. That should underscore just how confident (or crazy) he really is.