Please ensure Javascript is enabled for purposes of website accessibility
Log In Help Join The Motley Fool
Free Article Join Over 1 Million Premium Members And Get More In-Depth Stock Guidance and Research
By Ashraf Eassa - May 6, 2016 at 11:15AM

The chip giant's failure to capitalize on this market has little to do with CPU instruction sets.

Mark Hibben, writing for Seeking Alpha, offers up his view of why microprocessor giant Intel (INTC 0.82%) ultimately failed in the market for mobile processors.

"If we accept that Intel mobile processors were not technically disadvantaged, then there is only one way in which they could fail to be market competitive, and that's based on cost," Hibben writes. He goes on to cite a previous article of his in which he claims that "Intel's x86 architecture simply wasn't cost competitive with ARM (ARMH)."

Here's why this explanation is, in this Fool's view, incorrect. 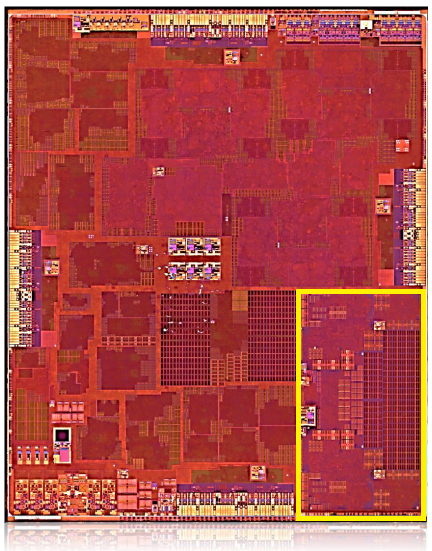 In yellow, I have highlighted the CPU complex of the A9 chip. Notice that, although it is sizable, it is hardly even the largest block on the chip (that honor belongs to the Graphics Processing Unit, or GPU).

If it is true that Intel's X86 architecture necessitates a die area penalty in the CPU core, in the context of a full system-on-a-chip that penalty just isn't going to be large enough to really move the needle in terms of cost. A competitive x86 product with CPU cores that are slightly larger than comparable ARM-based CPU cores could still do well in the market without being prohibitively expensive.

Taking it a step further, though, Intel never achieved leadership in many of the key intellectual properties required for successful smartphone chips (modem, image signal processor, low power graphics, and so on).

Why write this?
If Hibben's claims are correct, that X86 has this fundamental and significant cost structure disadvantage relative to ARM, then this indeed has negative implications for Intel's core server, PC, and Internet of Things chip businesses.

However, I believe that this argument is flawed and one should not extrapolate from Intel's failure in the smartphone/mobile chip market potential failure in markets in which Intel has demonstrated considerable success.