Please ensure Javascript is enabled for purposes of website accessibility
Log In Help Join The Motley Fool
Free Article Join Over 1 Million Premium Members And Get More In-Depth Stock Guidance and Research
By Palbir Nijjar - May 9, 2016 at 5:26PM

When BJ's Restaurants (BJRI -4.31%) reported first quarter earnings, its stock climbed more than 9% the following day. Buffalo Wild Wings (BWLD) shares, on the other hand, declined nearly 11% after its own earnings call just a few days later. While investors shouldn't focus on just one quarterly report -- the stock performances between the two companies are vastly different over the past five years -- there are still some takeaways from the latest results that indicate the script may have suddenly flipped for the two popular restaurants. 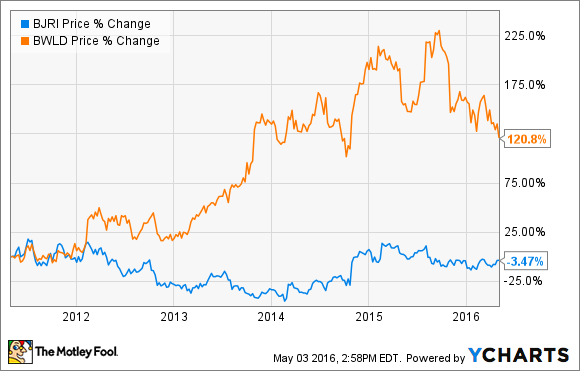 Comparable restaurant growth
The biggest eye-opener for Buffalo Wild Wings this past quarter was the sudden decline in same-store sales growth, which fell 1.7% year-over-year at company-owned restaurants -- the company's first year-over-year decline since the fourth quarter of 2010.

It should be noted that the negative comps this quarter went up against a very strong first quarter in 2015 when same-store sales grew 7%. However, the consistent downward trend is concerning. 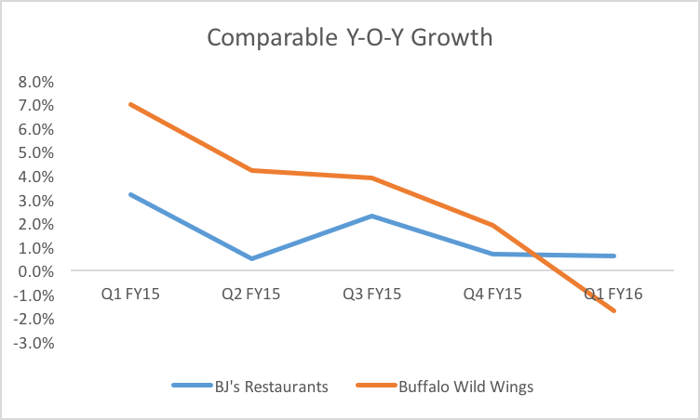 Buffalo Wild Wings is looking at a variety of ways to bring customers back through its doors. CEO Sally Smith had this to say during the earnings conference call:

Our sales-driving initiatives include: first, continuing to execute a strong takeout program and gain additional share; second, enhancing our Fast Break unch with a speed-of-service guarantee; third, improve and promote our value occasion; and finally, winning the market for soccer.

Time will tell if Smith can execute on these efforts, but given the company's prior success, I wouldn't put it past her. A year after the company logged its negative comps back in 2010, Buffalo Wild Wings was able to grow sales an impressive 9%. That type of rapid turnaround will be tougher to come by now, as the revenue base is higher, but any return to positive comps should alleviate some investor concerns.

Efficiency trumps growth
Despite negative same-store sales growth, Buffalo Wild Wings managed to increase company restaurant sales 17% and total revenue 15%. It opened 102 company-owned restaurants over the year. But even with these strong results, the trend at Buffalo Wild Wings is still downward. 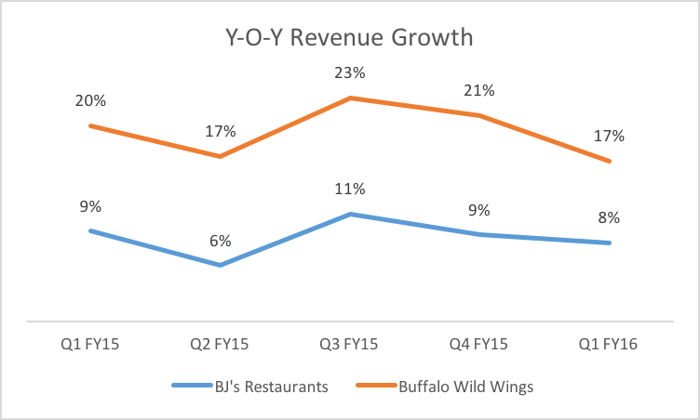 This increased productivity has been a focus of BJ's management team. During the earnings call, CFO Gregory Levin emphasized:

I want to reiterate [CEO Greg Trojan]'s message regarding the strategic plan we have been following the last couple of years. That plan focuses on building top line sales, improving our efficiencies and productivity throughout our entire organization, and continuing our steady double-digit capacity growth.

These initiatives proved successful over the past year, as revenue has grown faster than the three largest components of restaurant-level expense categories: food, labor, and occupancy costs. 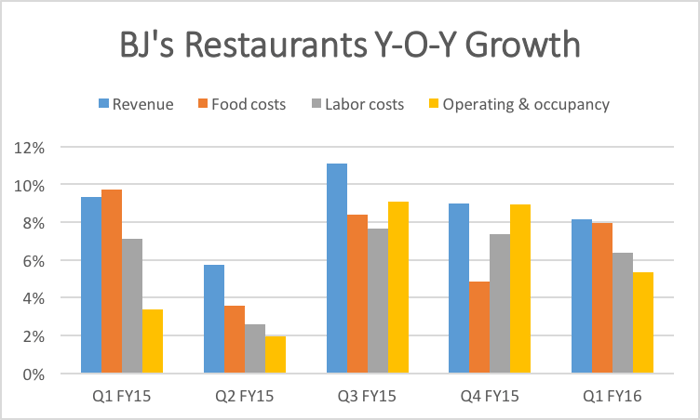 Buffalo Wild Wings, on the other hand, has struggled to maintain the same level of efficiency. Over the past five quarters, food, labor, and occupancy costs have consistently outpaced sales growth. 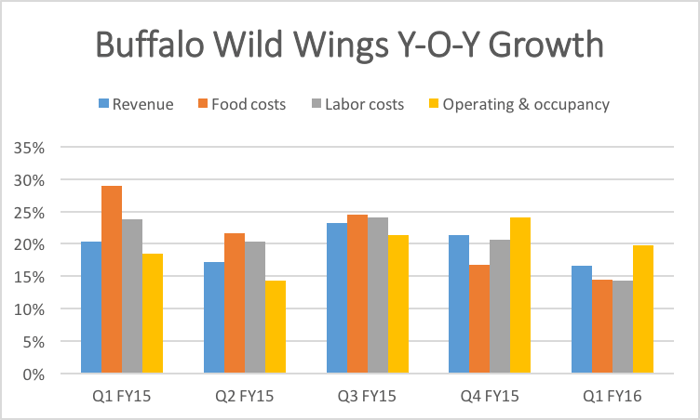 Looking ahead
Although BJ's Restaurants turned out stronger numbers for some of the key metrics discussed above, it may not be the better investment going forward.

Also, even though the stock rose 9% during its earnings release, the market hasn't given BJ's much credit for being an efficient operator. The stock is trading down about 6% over the past year. For the stock price to start logging bigger gains, the market will most likely look for higher same-store sales growth. The past five quarters have only brought comparable sales growth between 0.5% and 3.2%. Besides, the company can only manage costs for so long before it begins to compromise food quality and service.

At 1,190 restaurants as of the end of March, Buffalo Wild Wings has found pizza, wings, and beer to be a successful concept. With a goal of over 3,000 restaurants, it has a long growth trajectory ahead of it. The first quarter proved to be challenging one for the company, but if it can get back to positive comps growth, its recent decline could prove to be a great buying opportunity.