Please ensure Javascript is enabled for purposes of website accessibility
Free Article Join Over 1 Million Premium Members And Get More In-Depth Stock Guidance and Research
By Justin Loiseau - May 10, 2016 at 12:17PM

Recently, utility MidAmerican Energy, owned by Berkshire Hathaway (NYSE: BRK-A) (NYSE: BRK-B), blew away renewable energy investors with a surprising announcement: It plans to invest $3.6 billion in wind energy by 2020. This is one of the largest wind energy investments ever made and is a calculated decision on the part of Warren Buffett, Berkshire Hathaway, and MidAmerican Energy. But every decision carries risk, and it's important for investors to understand what they're getting themselves into. Here's what you need to know.

Details of the deal
In a joint announcement with Iowa governor Terry Branstad, MidAmerican Energy committed itself to a wind-filled future. If Iowa regulators give the thumbs-up, the utility will push ahead with a massive 2,000 MW project. The "Wind XI" project will double MidAmerican's wind capacity, from 41% of total capacity in 2015 to 85% by year-end 2019. It will also be the largest economic development project in Iowan history, according to the press release.

"We have a bold vision for our energy future," said Bill Fehrman, CEO and President of MidAmerican Energy, in a statement, referring to the company's plan to eventually supply 100% renewable energy for Iowa. "We don't know of another U.S. energy provider that has staked out this 100 percent position."

Why wind?
In 2004, MidAmerican Energy relied on coal for 70% of its total generation capacity. But in the same spirit as other utilities like Duke Energy ( DUK 0.05% ) and NextEra Energy ( NEE 0.90% ), MidAmerican has been ramping down and retiring much of its traditional fossil fuel fleet, opting instead for cleaner alternatives like natural gas and renewable energy. Since 2007, Duke Energy has spent more than $2.5 billion building up a 1,000 MW wind fleet. Over the same time period, it's also built two "clean coal" facilities totaling 1,440 MW and retired nearly 5,000 MW worth of conventional coal-fired power plants. NextEra Energy lays claim to the largest competitive wind fleet in the United States, with more than 12,400 net MW spread across 110 wind farms in 19 states and Canada.

Ultimately, Duke Energy, NextEra Energy, and Berkshire Hathaway's MidAmerican Energy aren't adding renewables to save the planet -- they're going green to make green. Shifting energy prices, technological advances, and environmentally inclined regulation have all pushed wind (and solar) power into cost-competitive territory. Most recently, Congress' extension of the renewable energy production tax credit has kept new installations roaring in for wind and solar projects. In 2015, more wind energy was installed than any other energy source.

Just a gust?
The reason wind is winning is also worrisome. As Debbi Durham, director of the Iowa Economic Development Authority, put it: "Investments of this scale are viable because federal production tax credits are at their highest level. It makes sense to leverage that benefit to solidify Iowa's leadership in wind energy." Fehrman also noted, "Our progress would not have been possible without visionary state leaders and regulators."

For investors, this introduces real risk. Wind's recent rise is due to plenty of factors, but regulation has played a real role in making this energy source competitive. In fact, part of the reason wind has expanded so rapidly is due to installers attempting to get construction going before tax credits expired (although they ultimately keep on getting extended). A quick glance at this chart of wind installations illustrates just how much regulation has changed wind's direction: 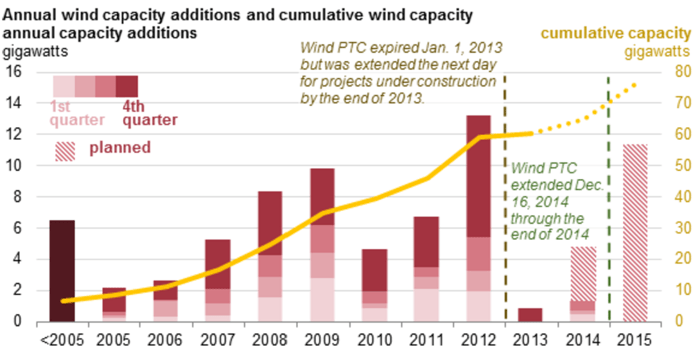 Warren Buffett himself has recognized these environmentally friendly regulations as both a challenge and an opportunity. With 10 energy companies in the Berkshire Hathaway portfolio, Buffett already lays claim to 7% of the nation's wind generation, the largest share among regulated utilities. That's a unique competitive earnings opportunity, and in 2015, its renewable projects pulled in $175 million in profit. But those same earnings could create a challenge, ultimately leaving the Oracle of Omaha exposed to any pro-renewable regulation removal. If regulators decide to pull their wind energy support, Berkshire Hathaway will feel it more than other utilities.

How to win with wind

As Warren Buffett put it in his annual Berkshire Hathaway letter:

Today, society has decided that federally subsidized wind and solar generation is in our country's long-term interest. Federal tax credits are used to implement this policy, support that makes renewables price-competitive in certain geographies. Those tax credits, or other government-mandated help for renewables, may eventually erode the economics of the incumbent utility, particularly if it is a high-cost operator. [Berkshire Hathaway Energy]'s long-established emphasis on efficiency -- even when the company didn't need it to attain authorized earnings -- leaves us particularly competitive in today's market (and, more important, in tomorrow's as well).

What this means is that MidAmerican Energy and Buffett's other energy companies aren't doubling down on wind energy to make up for losses from other unprofitable energy sources -- they're doing it because it's an important aspect of an overall strategy to focus on reducing costs, increasing efficiency, and setting themselves up for long-term profit. And since this latest announcement depends on regulatory approval to even move forward, MidAmerican Energy has essentially put the ball in the regulators' court -- it's for them to decide whether they want to play.

Investing in wind energy has historically been considered a high-risk decision. But as Buffett notes, it's become increasingly risky to stick with the status quo, and regulators are playing their part to reduce the riskiness and increase the return of a wind investment. Warren Buffett, Berkshire Hathaway, and MidAmerican Energy haven't made a $3.6 billion mistake -- they've made a calculated decision based on a multifaceted thesis, and investors should consider their own opportunities to follow suit.