Rackspace Hosting (NYSE:RAX) reported first-quarter results on Monday night. Here's how this period worked out, and where management is taking the cloud-computing hosting company next.

What happened with Rackspace this quarter?
The reported revenue figure was within management's guidance for the quarter, albeit at the lower end. Rackspace is busy starting up support services for new clients and partners, rather than looking for pure cloud hosting sales.

Rackspace's management provides revenue guidance for the next quarter and full fiscal year, along with some items further down the income statement. The company does not offer firm earnings targets.

What management had to say
In a prepared statement, Rackspace CEO Taylor Rhodes underscored the growing demand for the company's support services, targeted at all of the leading cloud computing platforms.

"Collectively, we now deliver expertise and support for more than 400 customers on these cloud platforms, including some of the world's largest companies and leading brands," Rhodes said. "While we are experiencing hyper-growth in these new offers, we also continued to reduce our capital intensity and boost our free cash flow." 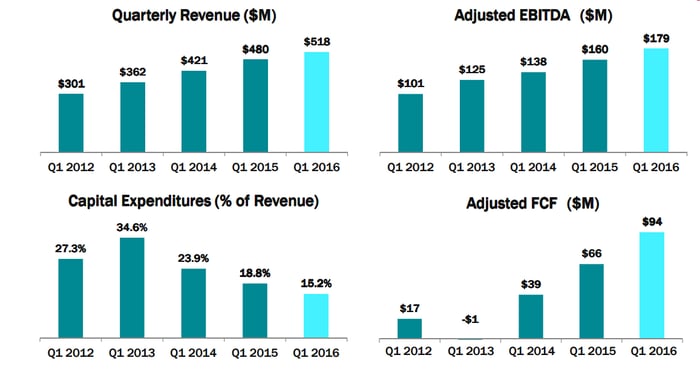 Looking ahead
As Rackspace's customers continue to move into OpenStack servers, and the company itself reaches for business opportunities hosted elsewhere, capital expenses will shrink over the next few years. The company decommissioned 1,600 servers in the first quarter, all without putting the brakes on revenue or margins.

Many investors disagree with this change, and share prices have been plunging recently. That trend continued on Monday, when Rackspace shares reacted to the Q1 release with another 5% drop in after-hours trading. The stock has now fallen 60% over the past 52 weeks.