Please ensure Javascript is enabled for purposes of website accessibility
Log In Help Join The Motley Fool
Free Article Join Over 1 Million Premium Members And Get More In-Depth Stock Guidance and Research
By Nicholas Rossolillo - May 12, 2016 at 4:00PM

Americans are still flocking to the company's restaurants, but you wouldn't guess that from the stock performance.

Since getting off to a horrific start to 2016, the broader stock market has rebounded from its lows in February. Over the same time period, shares of Buffalo Wild Wings (BWLD) have been stuck in a rut. After mounting an initial recovery in March, shares of the popular sports bar and wings eatery are back down and are now at a 52-week low. What is the reason for the underperformance, and what needs to happen to get things moving again? 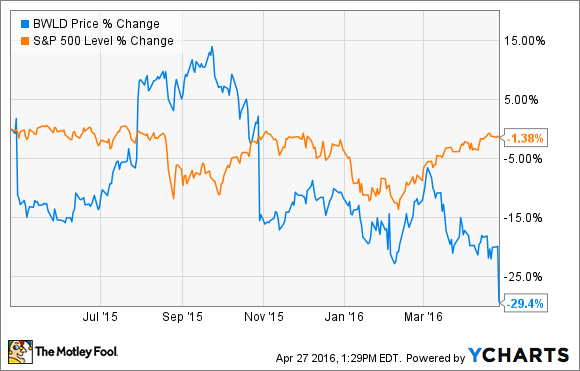 The past year in review
Over the past year and into the first quarter of 2016, Buffalo Wild Wings has posted strong revenue growth averaging nearly 20%. Earnings have also been growing steadily. So why has the stock been underperforming the market? In short, its growth has been less than what Wall Street wanted to see. Shares recently fell again by over 10% after the last quarterly report when same-restaurant sales decreased by 1.7% at company-owned locations and 2.4% at franchised locations. The company also reduced the number of new restaurant openings for the coming year and slightly revised down the earnings outlook stated a few months ago. Here is a table illustrating the last year and a quarter:

The market has been unfair to the sports-themed chain, but I believe this is a great opportunity to buy in. In its first-quarter earnings report, Buffalo Wild Wings reiterated a strong pipeline for expansion. During 2016, it plans to open 40 company-owned restaurants, 30 to 35 U.S. franchised restaurants, and 12 to 15 new international franchised restaurants. Management also sees profits rising by 14% to 18% as a result of continued growth. If these developments come to fruition, I think the stock will regain traction and continue moving higher, as I explain below.

Decreasing food costs
Buffalo Wild Wings' food and labor costs soared almost 25% last year, driven especially by a higher cost for chicken wings. So far in 2016, those costs have been held in check, up only about 14% from the previous year. Most of those increases, moreover, can be attributed to the new restaurants now in operation. Since this time last year, the company has added nearly 100 new restaurants, representing a nearly 20% increase.

The company expects food costs to stay roughly flat for 2016. Management sees general food and drink prices falling, offset by an increase in traditional wing prices. The increase in wing costs is expected to be substantially lower than last year, estimated to be up only about 3%, as the company had favorable contract renewals with wing suppliers in the first quarter. What was a headwind against growth last year should thus subside this year as the overall cost of food stabilizes. Those stable costs will help bottom-line profit as the company continues its expansion efforts.

Repurchase of underperforming franchised locations
Another negative impact on company profit last year was the purchase of 54 franchised Buffalo Wild Wings locations and converting them to company-owned and -operated restaurants. This reduced profits by over half a percent in 2015, the company said, but the change is expected to boost the bottom line this year.

Why is this a good long-term move? The company has 587 franchised restaurants to 603 company-owned and -operated locations. Even though nearly half of all Buffalo Wild Wings locations are franchises, less than 5% of total revenue came from franchise fees. While those franchise fees dropped significantly as a result of the acquisitions, total revenue saw a significant boost. Over the long term, the company sees the continued acquisition of certain franchises as ultimately boosting profits further.

Development of other growth drivers
Buffalo Wild Wings isn't all about chicken wings anymore. The company made efforts to diversify its business when it made a small investment in build-your-own pizza chain Pizza Rev in 2013 and when it purchased R Taco back in 2014. The company owns four and franchises six R Taco locations, and it owns two Pizza Rev locations. For 2016, the plan is six new company-owned and four franchised R Taco locations, and the company cites continued expansion of Pizza Rev.

I like that the company is increasing its footprint in the fast-casual eating industry. At some point, America will have an adequate number of Buffalo Wild Wings locations, and over the past couple of years, growth in the number of those restaurants has started to slow. Anticipating the need to generate growth elsewhere, the company has invested in pizza and tacos. Chipotle Mexican Grill's success over the past decade has proved that fast-casual Mexican food can be successful. Pizza Rev has seen initial success as well. Having started in 2012 in Los Angeles, the company now has 34 locations, with another 16 on the way. These small investments for the future could help keep growth momentum going after Buffalo Wild Wings' momentum slows.

While it has been a disappointing run as of late for America's largest wing and sports bar chain, 2016 has the potential to be a great year. I think continued growth in the overall business, paired with an improvement in food costs and realized returns on investments from last year, will drive profit higher this year and pull the stock out of its rut.